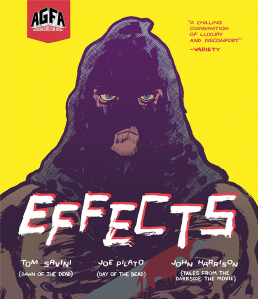 What you get out of AGFA’s great newly restored print of Effects very much depends on what you go in expecting. As a low budget 80’s horror flick “cobbled together with loose change” by a few friends of George A. Romero, the film does indeed retain a certain rawness throughout along with a tiny bit of graphic violence and a few shocking scenes here and there. The film also manages to be more than a bit prophetic about how today’s reality TV’s nonsense of cameras, cameras everywhere can actually be somewhat chilling and yep, desensitizing.

But let’s stick to what’s here first and foremost. There’s a horror flick being made in Pittsburgh and you’ve got a front row seat to the festivities. Again, don’t go into this one expecting bodies falling on cue and a predictable ending where you know what’s coming a mile and a few minutes away. SFX makeup whiz Tom Savini may be in this one, but he’s doing the acting and stunts thing this time out.