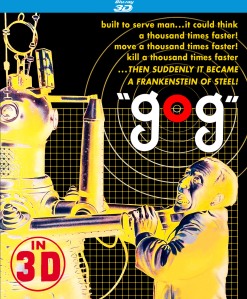 While the three films in Ivan Tors Productions’ “Office of Scientific Investigation” (OSI) trilogy haven’t gotten the name recognition or massive fan bases of certain other more well-known franchises, each stands out as a fine example of Tors’ commitment to bringing a more scientific and human touch to the genre. While not going for camp or cheap thrills, the films make for a look into Tors’ heavy interest in pure science fiction with independent films he got made on his own terms.

Beginning with 1953’s The Magnetic Monster, 1954’s Riders to the Stars, and GOG, also released in 1954, the three films trade in the era’s familiar “B” movie antics for drier, more “realistic” hard science mixed with speculative elements. While some action scenes take place in all three films, outside these sequences things are done with a more sedate, almost documentary-like presentation of their assorted plots.

Additionally, all three films can be watched and enjoyed fully in any order, as they tell stories that are connected by a few threads, but don’t contain the same characters. Chief among these threads is men (and women) of science trying to make advances in the field for the future with dramatic (and sometimes unfortunate) results. Or: you can’t make a science-flavored omelette without breaking a few scientist-shaped eggs…
END_OF_DOCUMENT_TOKEN_TO_BE_REPLACED