Hey there- here’s some more random stuff I unearthed from the vaults while my PC was out of action for a few days earlier this week. I ended up making more of a mess “cleaning up” than I did when I left all those bins and boxes alone. But I did find some nice things I knew I’d kept for assorted good reasons. Enjoy the quick trip down memory lane!

If I recall correctly, this sketch was gotten in a rather oddball reverse double back-flip manner at a Creation Con back in 1981 or ’82. I was minding a friend’s table at the show while displaying some of my (lousy) artwork and a man walked up and started looking through my stuff. We chatted for a bit about comics and when he told me his name was Al Kurzrok, I was thrilled because I remembered the outstanding lettering he did for Marvel on Doctor Strange back in the late 60’s. When I noted that to him and asked for an autograph, he asked me for a sheet of paper and did this quick sketch. That was a big day-maker for me back then. 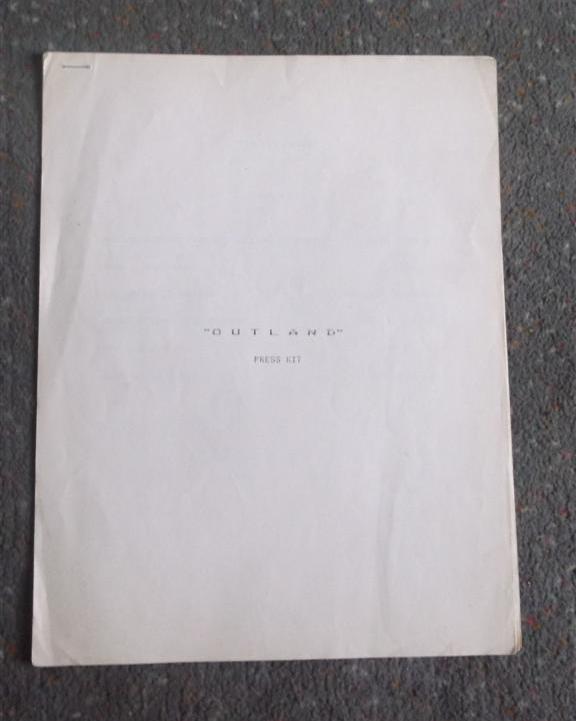 Heh. Back in 1981, a dot matrix printout sure looked “futuristic”, so here you go: The press kit for Peter Hyams‘ sci-fi flick OUTLAND. The film is basically High Noon in outer space with Sean Connery playing the Gary Cooper part. High Noon is a better film by far, by the way. That said, it does have some suspenseful moments (and a few exploding heads, eww), Frances Sternhagen gets the best part and lines in the film and there’s a great Jerry Goldsmith score worth tracking down.

All that and like many of Hyams’s best films, there’s a nice foot chase that perks things up at just the right moment.

I have a lot more ancient history here, but I’ll pull the plug on this installment before I end up making an even bigger pile of stuff in the home office. No need to have to sleep curled up in a closet because there’s way too much stuff on the bed and floor, right?

Outland was and is one of those films that never quite got the recognition it deserved and yes, still deserves. “Was” in terms of its at the time quietly groundbreaking visual effects and initially successful (but eventually disappointing) run at the box office back in 1981, and “Is” for the fact that it’s suffered through some pretty lousy transitions to home video over the years.

The recent (and thankfully, mostly excellent) Blu-Ray release makes up for the terrible DVDs from 1997 and the much better (but still not quite perfect) 2007 DVD reissue from a few years back, but for some reason, the “making of” feature found on the DVD is missing in action on the Blu-Ray version. OK, “Who didn’t want to pay whom for what  and why?” I have to ask (nicely, though… nicely).

It’s almost as if Warner Bros. Home Video is just getting the film out as a bare minimum budget release with as little bells and whistles as possible (and a terribly misleading tagline on the cover art) just to get it out of the way and move on. Granted, the film isn’t as “important” to the sci-fi genre as Ridley Scott’s Blade Runner was (a film that’s gotten a few major VHS and disc releases over the yers including some impressive collector’s editions). But it sure deserves a hell of a lot better preservation job than to be dumped into stores with zero fanfare and no other special features than a trailer and director’s commentary.

Hell, I remember the film getting a pretty rousing reception when it was introduced at the comic book and sci-fi convention I went to here in NYC over 30 years ago…