While it’s got quite the generic title, don’t pass up the chance to snap up Warplanes: WW2 Dogfight ($9.99) on the eShop, as it’s a stellar, challenging arcade-like flight combat game with a few simulation and light RPG elements. Featuring fast-paced gameplay, solid visuals, tight controls and difficulty that ranges from casual to challenging, it’s quite a nice surprise for a budget-priced digital game.

Each of the three campaigns (UK, Russian, German) can be played in their native language (with English subtitles), an excellent touch that adds authenticity to the overall experience. For the most part, the mission structure is similar across all three campaigns where you’ll hop into an assortment of planes and take on missions ranging from dogfights, bombing runs, and other aerial ace combat. The gameplay can be set to auto-target/autofire for more casual play, standard aiming and firing where you need to learn how to “lead” planes and fire at where they’re headed, or a hardcore mode that loses that auto-targeting and has you rely on sheer skill alone. Dealing with multiple bogeys coming your way from all angles when you’re having to target and fire without aid can be frustrating, but it’s a great way to truly test your nerves.

Just another day at the aerial office, mates…

As you progress though the story, you’ll get to eventually manage a growing air base where you can gain a roster of AI pilots you can take on missions with as well as some lovely planes (over 30) to to customize and upgrade. This part of the game is handled excellently and never feels like the dull busywork some other games force on players. Winning missions efficiently rewards you with experience points that can be used to upgrade stuff and pay whatever costs are accrued, so there’s a nice risk v. reward dynamic in play that keeps things from growing stale, at  least in my opinion.

Fortunately, the ally AI is quite capable of staying alive and aloft for the most part. They’ll never dominate a map and allow you to breeze through to an easy win without firing a shot, so lazy-minded players looking for fast rewards need not apply. This is the sort of game that’s compelling enough to keep you in the thick of things despite a bit of repetition in some missions and a few jumps in difficulty where you may be flummoxed by failures until you make a few adjustments to your play style or planes you’re using.

Okay, sometimes Jerry gets the best of Tom. Ah well… bail out!

As the game is entirely focused on the aerial battles and not every bit of terrain detail, the planes get the most love with some absolutely gorgeous colors and lighting. Skies and terrain also look great, but don’t expect to see teeny-tiny people running away from your strafing and bombing runs. Hell, you’ll be busy with enough as it is to pay THAT close attention to people on the ground or on enemy fleets that require that rat-a-tat-tat action the game excels at. New to the Switch version is one exclusive plane (the Curtiss P-40 Warhawk), but alas, you won’t see an American-based campaign here if that’s what you’re looking for. The game is fine without it, but one would hope to see an update that adds to an already packed with content game at some point in the future.

If there’s a bigger (but still minor in the grand scheme of things) caveat, it’s the lack of any sort of multiplayer modes. Granted, the game’s super speedy performance is a result of the solo focus and any sort of lag or stutter in online play would spell a spiraling doom for a game such as this. I’m gathering that overall sales and consumer feedback will compel developer Home Net Games and publisher 7Levels to decide if they can indeed whip out a follow-up that allows some sort of capable MP experience on the Switch. Me, I’ll take a sequel with or with out the option, thank you, provided it’s as fast and has a tad more mission variety. 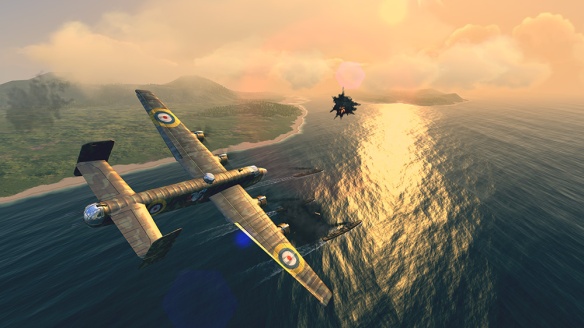 I could say that this game is “da bomb”, but that’s too darn obvious as well as an awful pun.

But we’ll see what happens, shall we? For now, this is a great way to spend a tenner on the eShop as it’s one of those cool indie gems that will keep you busy and grinning through multiple plays. I’m still banging away at Hardcore mode (and gleefully going down in flames a few times), but I can more than highly recommend this one whether you’re a fan of these classic aircraft or just looking for a quality air combat game featuring vintage aircraft at a nice price. Hmmm… imagine what this dev team can do with WWI aircraft? Hell, I’d play a game with those in it in a heartbeat. It’s too bad the Star Wars license is where it is now, as I’d love to see how Home Net would handle a game with those more familiar to the pop culture crowd spacecraft.

Sometimes, seeing red can be a good thing. Um, “Privet, tovarishch letchik!” I think that’s how it goes…

Eh, enough pipe dreaming from me – go buy this game.