With pixel-packed “retro” games showing no signs of stopping, it’s great to see Delve Interactive shake up the scene with Poncho, a game that’s both new and nostalgic with a side of super challenging for good measure. The open world side-scrolling platformer features multiple layers of parallax scrolling to hop in and out of in order to progress and this is both excellent and a tiny bit frustrating until you get your sea legs. The game’s depth also extends to the minimalist but somewhat deep story of Poncho, a cute little robot who finds himself going where no man has gone before because there aren’t any humans left in the world the game takes place in.

END_OF_DOCUMENT_TOKEN_TO_BE_REPLACED

I saw screens of PONCHO a while back and bookmarked the page, but my recent computer woes knocked the game off my radar until the magical unicorn named David Bruno hit me over the head with some more screens and a preview code. If you have a Steam account, a PS4, Vita or Wii U, love platformers and puzzle games of any type and have an appreciation for all things “retro”… well, you need this game, period.

PONCHO is an open world puzzle game from Delve Interactive that features a cute robot (who just so happens to be wearing a poncho) who sets out to find his creator. Robots require that sort of closure, you know. What makes the game unique is not just the lovely sprite graphics and eye-popping color work, but the three layers of parallax scrolling Poncho can move through as he explores. While some online wags have made Fez comparisons, the games only share mascot-ready main characters and the ability to travel through environments in abnormal ways. 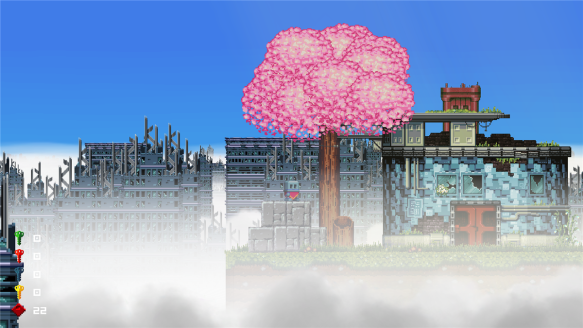 Granted, there have been a handful of games where hopping back and forth between planes was key to gameplay. Treasure’s Yū Yū Hakusho: Makyō Tōitsusen for the Sega Mega Drive and Guardian Heroes on the Saturn used multiple planes for their gameplay and Cobra team’s Bastard!! Ankoku No Hakai Shin for the Super Famicom featured characters that needed to be rotated from foreground to background as a major part of the gameplay. That said, those were all fighting game variants while PONCHO is focused on exploration and puzzles of assorted varieties.

As you can see in the videos above, the game looks phenomenal and the transitions between layers is flawless. Some quick hands-on time reveals it’s got the looks and play going for it and fans of old school/new school blends will be smiling for as long as they have their hands on a controller. There’s a slower, more languid pace to PONCHO that’s welcome in this twitch-heavy gaming age, but those timed sections will certainly keep you on your toes. Anyway, I’ll shut up for now other than to say that Rising Star Games has another winner on its hands and PONCHO will be one for the ages when it all comes together for its June release. Back with more in a bit – I have a little robot calling me to play with it. Er, find its creator I mean!