“Brilliantly depressing” is how I’d describe CRYSTAR ($59.99), Gemdrops Inc. and FURYU Corporation’s new Action/RPG published by Spike Chunsoft, but let’s not get too far ahead of things.

Rei Hatada and her little sister Mirai are pulled by a strange being into an odd dimension called Purgatory where violent creatures soon appear to attack the two. Rei manages to unleash a hidden power that gives her a powerful weapon and fancy costume, but she accidentally kills her kid sister during one battle. As she cries at losing her sibling, two oddly garbed female demon twins appear and make her an offer she can’t refuse. Become an Executor for the twins and kill enough demons in Purgatory in order to gather enough Idea (tears) to save Mirai’s soul before it descends too deep and gets reborn as a completely different person. You get one guess as to Rei’s decision.

Thus, the downward spiral begins in a game that will hit home hard for some players thanks to its assorted mostly gloomy thematic elements and a story that has a few surprises tucked into its narrative. Thankfully, while a tad (okay, very) downbeat at times, the game is gorgeous to look at. Illustrator RIUICHI’s work was lovingly translated into 3D characters by Character Designer & Modeling Lead ntny and the game also features an outstanding score from composer Sakuzyo that’s worth a listen. 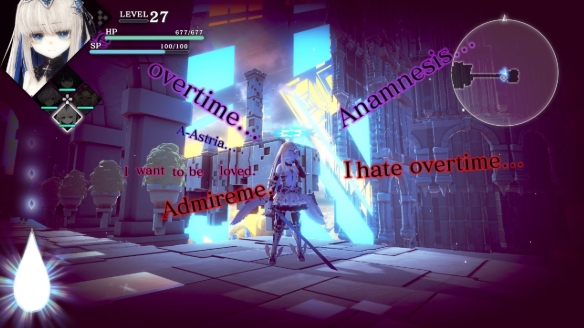 Wake up, time to cry. And you thought you had issues. Rei’s literally surrounded by her and her slain foes mental status, even during dungeon diving.