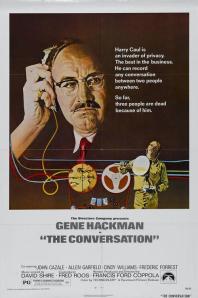 It’s not surprising at all to me that everything we do on the internet or on the phone is monitored and for the most part, the average Joe and Jane is too caught up in not paying attention to this as an important issue and continues yakking or clicking away because they don’t see sanctioned invisible nosiness as a problem until it stomps on their big toe while chasing someone else.

That or there’s an “Oh well, what can you do?” attitude that’s only changed when they find out how bad things really are before case of mild online petition signing and outrage slides back into apathy as soon as that new Kardashian photo or cute cat video pops up in your inbox. Yeah, you know that’s you in there somewhere… I’ve got the transcripts if you want to come check them out sometime…

Anyway, The Conversation may (and should) make you even more paranoid as you’re watching it, but feel free to feel delighted as well as its eavesdropping surveillance whiz (Gene Hackman in one of his best performances) has his world fall apart around him while he plays catch-up with his conscience. For me, this is my favorite Francis Ford Coppola film because it’s still as timely, smart and ultimately depressing as it was when it was released almost 40 years (!) ago.