While not without its minor flaws (which can be patched in future updates), Warhammer Chaosbane ($59.99) is a solid and worthy ARPG genre fans should absolutely take for a spin. EKO Studios has cooked up a pretty addictive game that, once you’re hooked into it, delivers exactly what it intends and does it well enough that some if its issues can be overlooked thanks to the core gameplay, which works even better in co-op if you’ve a few friends to play with.

As a solo experience, it’s also quite entertaining, with a sort of Dungeons & Dragons Heroes vibe (as in longish levels and plenty of tough foes to vanquish when you go it alone). Okay, so it’s more or less a Warhammer version of the original Diablo, but this ends up being an excellent thing overall thanks to ten difficulty levels that mean you’ll never get to say this game is too easy if you’re at all serious. With the extra modes (Expedition, Boss Rush, Relic Hunt) and the developer planning more free and paid content in the future including at least one additional chapter expansion pack and a load of bonuses, this one’s going to be an evergreen game for ARPG fans who want more of what it delivers.

I noted Diablo over Diablo III because to me, EKO seems to have wisely went back to the grimmer version of Blizzard’s classic over the more colorful (yet still quite grim) third installment. Despite the repetition in layouts and static level art, there’s a gritty, nasty vibe in the first two chapters that feature either gloomy sewer maps or a ravaged village packed with kill-crazy demons of a few varieties. The third chapter’s outdoor map, a forest area full of deadly creatures, almost looks too clean, but the somewhat linear library maps with their menacing vibe more than make up for that flaw. That said, the fourth chapter knocks it out of the park with what I’ll describe as the world’s richest kid’s brand-spanking *new* dungeon play set, Deluxe Version. in other words, I love this map, folks:

Where the other maps tend to have a static look to them despite a few destructible barrels and such, Here you get a sort of Castle Grayskull maze dungeon on steroids with stone, shiny metal of a few types and gracefully writhing tentacles all vying for attention with the fiercest enemies in the game outside the main bosses. Although the game ends up reusing one re-lit familiar setting for that final push to the end boss, that final fight is set in a wildly ornate (albeit tiny) arena where you’ll need to be fast and determined to take down a pretty dangerous foe (Protip: don’t die!).

Dying during a boss fight allows you to start from the beginning, which is a better alternative that quitting and replaying a map. Interestingly enough, on my first play, the game crashed during the last boss fight after I died twice, but when I fired up the game again, I was surprised that I was able to continue from the beginning of the battle with no penalty.  The hilarious thing was I did beat the boss on that last try with a measly 12 HP left. I thought I was a goner as the boss was about to lay down a hit, but it died and I nearly died myself from thinking I’d made it that far only to have to try again. 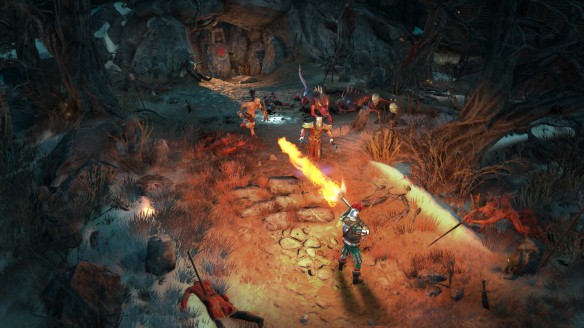 Each of the four playable characters follows the same story arc with only different voices and slightly different opening movies. I do wish more of that nice hand-drawn (or is it computer-drawn?) art would have been added to each chapter to link them into more of a narrative, as the movies are done in an animation style that adds an almost “3D” effect to the flat art. Quests are of the standard “Go here, fetch that” or “Go here, kill that” variety and the narrative is set in stone as far as you can’t choose not to take a side mission because the story is laid out so your characters have to go even if you, the player don’t. Hey, just go earn that gold, gems and experience pal. You’re going to need them.

Of the four classes, I enjoyed Elessa, the elven archer, the most. I think she was at some point in development a male, as she’s called “he” in one cut scene’s text (the voice actor talking about her clearly says “she”) and there’s at least one or two instances of a male voice actor suddenly chiming in with a response before switching back to a female voice. Oops. I though her voice actor was fine, by the way. My impressions of elves in my entertainment is they can be overconfident and arrogant in some cases, and totally quirky in others. Thanks to her voice actor, Elessa comes off as maybe 20% of the former and 80% the latter. Yeah, yeah, she’s not as rough and “heroic” sounding as the dudes, but hey, she’s got the skills that make up for her voice actor’s chosen manner of speech. That and, bonus points for no overtly revealing “sexy elf” outfits (functional but overly gaudy and ornate patterned armor FTW!).

Anyway, she’s currently at Level 46 (the current cap is level 50) and has completed the main story plus a few Expedition Mode quests and about a half hour of co-op play online. The other heroes are in the process of being played, but having had a go with them in the beta, I more or less know what to expect as I continue my time with the game post-review. I do intend to mess with her build and see what the other skills do as I get to level 50 and try out the harder difficulties. I did survive a few Normal mode quests upon replaying the campaign, but man, I’m getting smooshed into the cobblestones on Chaos 1 (well, for the moment).

The Magnus Edition ($79.99) adds a few perks in the forms of a gold booster, pets that increase a player’s pickup radius, and four emotes (which are kind of unnecessary to me, but are popular nonetheless in other games) and a season pass to additional content. I slotted the pet and gold bonus (they worked fine) and an emote, but didn’t notice any effect on the latter probably because I was too busy trying not to get killed by the mostly efficient AI enemies. As for the level of challenge here, As noted, no one worth their salt can say at all the game is “too easy” unless they play on Very Easy mode… which is no total cakewalk if you’re lazy. The four bosses will straight up murder your character in about a minute if you’re careless and some of the Elite enemy types can zap you from ranged distance, yank you in for some pain time, or otherwise make short work of your efforts.

The skill system, weapon blessing, and God Tree chart are impressive ways to even the odds, but all are set up so that you’ll need to level up considerably and have the gold and items to make the best use of them. Skills are points-based and you’re only allotted a certain amount of points each level up. That means your base and supplemental skills will grow, but you’ll need the right amount of points or more to activate more powerful skills. This means you can shift points into some killer skills at the cost of being weaker in some attacks, or balance out skills you like and become a bad-ass assassin of all things demonic. I kept my Elessa mostly with her starting skills, eventually beefing up her poison boost to the maximum and pretty much keeping the smaller enemies dying before many could lay a claw or zombified finger in my direction. The other characters are bit trickier to play but still tons of fun as you learn them. Speaking of learning, I’m learning the High Elf Mage, Elontir (that’s Mister Glass Cannon to you) can be really awesome as you get good at “steering” spells around with the analog stick.

As for fixes, I ran into that floating demon seen above (oops), some minor visual glitching in Chapter Four where the background art vanished in a few spots, a few minor typos (such as the he/she Elessa text) and yeah, Ellessa being able to shoot through some walls. Granted, her aiming needs work so she can consistently hit targets either above or below here from off screen. As it is, it seems that the game is dice-rolling her shots more than it it is calculating actual hits. Both she and Elontir need a target lock of some sort, as there’s nothing worse than casting a spell and missing your target(s) completely from a few feet as they then close in and start whaling away.

Eh, we’ll see where that all goes as the game launches and gets played by more outside those who pre-ordered and played the beta and are now grinning with delight about what’s here. In a way, EKO is already off to a better start that NeoCore Games, whose now outstanding Warhammer 40,000: Martyr – Inquisitor (buy it!) kicked off with a number of launch issues that took a few patches to resolve. Warhammer Chaosbane is getting off to a better start that will only improve as fixes and tweaks improve the overall experience even more.