Hmmmm. But I give it a thumbs up, with reservations…

I still have my boxed copies of Gothic and Gothic II here and got the non-Piranha Bytes developed Gothic 3 on a disc with two other games, so this news of a playable teaser got me thrilled the series is in a comeback mode of sorts. THQ released a demo of what their team in Barcelona is working on a few months ago and is very wisely asking for user feedback and whether they should continue with the project. In a nutshell, it’s a big YES from me despite some huge problems from the start, and yes, I have some notes to offer as a fan. Constructive criticism time:

Rewrite the too chatty lead character! The lead talks far too much, as if he’s in an old Marvel comic hero-quipping through a page non-stop. I know we all do talk to ourselves in real life and/or have “inside voices” to express our thoughts, but going from the voiceless intent of Gordon Freeman (the Half-Life games excel at storytelling and some excellently written non-player characters pick up the slack of Gordon’s silence) to this guy never shutting up his thoughts throughout the game tends to be somewhat maddening. I suggest a compromise: since it seems a lot of dialog has already been recorded and an actor was likely paid for his services, let players choose a reasonable level of dialog from light to heavy, as everyone’s different and some may like all that exposition.

The opening… Well, it’s too muck like a modern action movie and the original game was a lot more subtle and still works. Drop the silly fireworks show and stick to what went before. The current demo is like having the biplane hit the bus at the beginning of North By Northwest but on top of Mount Rushmore and well, where do you go from there? The original built a story and land as you pressed on and the factions and how one interacted with them were the focal points. The remake has some of that happening, but the opening is off putting because it tries to do too much to be something it shouldn’t be. 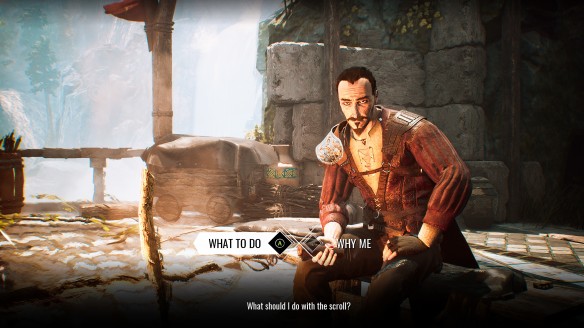 Two phrases I use every day, trust me.

Combat really needs to be redone. Yes, I know it’s a demo, but the fights feel unsatisfying and somewhat random with the hits and misses and there’s a bit of clunky feeling to the combat, which needs to be more fluid, but not like some modern action games where you mash buttons mindlessly. Some fine tuning and an optional/tweakable user interface would help a lot. That said, it seems some old school Gothic fans are doing a bit of gatekeeping here as they seem to not want to realize a brand new player may need those aids for a few reasons like a disability, so they need a finger wagged at them a little.

For me, I look at this double-edged sword this way: In some cases, I’d rather see a new game open to ALL players or anyone that’s curious than one that strictly adheres to ONE type of player. Of course, I’d make a few exceptions (the Demons Souls/Dark Souls/Outward type of games, which can indeed be frustrating if you’re a slow learner and come into them blindly without a point of reference). But THQ is frankly, in the business to sell more games, not less. A new Gothic shouldn’t only be played by nostalgic hardcores who don’t want anyone else to play a game that would likely do well in a market where MORE people enjoying a game like this a good thing. It’s a balancing act at the end of the day.

I have those terrible nights, too – no beer or dice required.

Let the UI be optional for the hardcore who also want to make the combat more difficult like a few games where you can tailor the interface and challenge to your liking, and everyone’s happy (unless people like to whine about a sensible solution). If the story is good enough, people will play a game more than once and likely learn the ropes (and boost the difficulty) because they’re hooked in and want to try all the modes out. Keep the game single player, no DLC or pre-order stuff, please and we’re good. I know some players may want a female lead or a character creation function and so on, but let’s see about fixing things in the demo if the developers decide to push on or start from scratch.

Whatever the developers choose. it’s very likely going to be better that the third game and definitely better than the 4th, which is a Gothic game in name only., but only after the initial title it uses. Yeah. I have it here as well, but I won’t tell if you won’t. 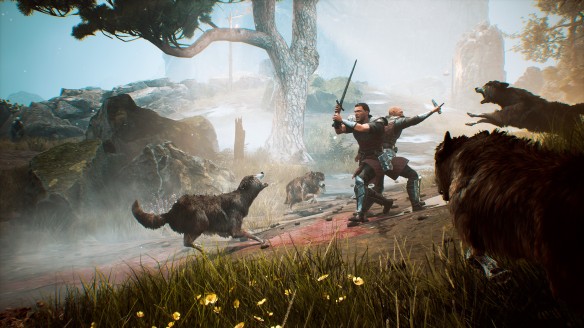