If I haven’t said this before (and I think I have), I absolutely LOVE CD Projekt RED. Their previous two games in The Witcher series were lovingly crafted mature experiences that brought Andrzej Sapkowski’s anti-hero Geralt of Rivia to the PC and later console gaming masses (many of whom who probably didn’t read any of the books the character comes from until after they played the first game) and The Witcher 3: Wild Hunt looks to get even more gamers drawn into what’s looking like one of the best experiences on those shiny new consoles. Of course, PC gamers who rock those rent money priced gaming rigs will be getting the best experience in terms of visuals, but there’s no doubt that the developer is making both the PlayStation 4 and Xbox One versions of the game look spectacular on those systems… 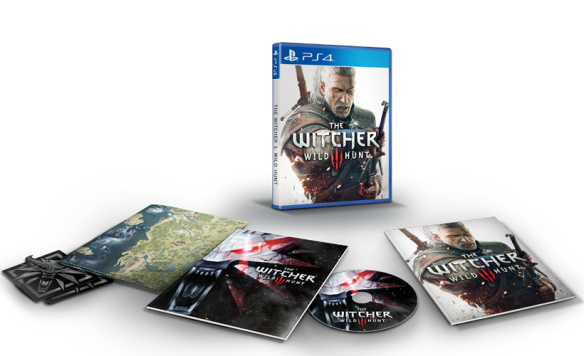 The announcement today at gog.com’s big video conference that EVERY Standard retail edition of the game will pack in the same bunch of goodies is fantastic news for a few key reasons. As company co-founder/joint CEO Marcin Iwiński noted early in the presentation, the rather confusing amount of retailer exclusive DLC for other games is a pretty crappy way to sell a game to users who merely wish to play something they like without having to decide which version to buy and where to buy it from, so here’s what you get whether you pre-order the game NOW or walk into a retailer post-release:

– A Blu-ray™ Disc with the game (DVDs on PC)
– An exclusive CD with the official soundtrack
– The official, developer-created “Witcher Universe – The Compendium”
– A beautiful, detailed map of the in-game world
– A set of unique stickers
– A stylish, protective sleeve

You have to love how they pretty much took an empty game case for all three platforms and stuck as much stuff as they could comfortably fit inside (and still have it close securely). That’s dedication to the fans, I’d say. As far as the
Collector’s Edition goes, it’s magnificent and although I have no room here for something that massive, I’d LOVE to have one because, well… look at it: 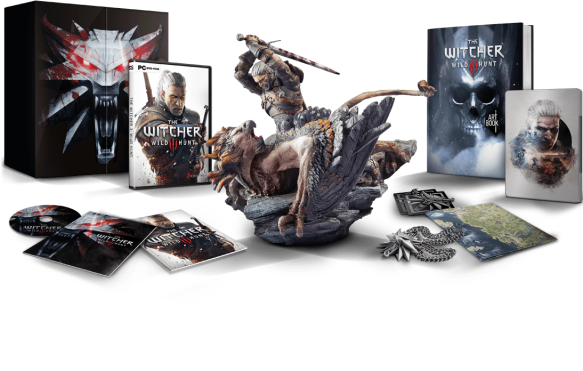 – All the contents from the standard edition of the game
– A giant, 33x24x26 cm (10”), 100% hand painted, Polystone figure of Geralt of Rivia battling a Griffin
– An exquisite, collector-grade Witcher medallion
– A one-of-a-kind SteelBook™ box
– A two-hundred-page artbook, containing breathtaking art from the game
– Huge outer and inner Collector’s Boxes you can store your Witcher merchandise in!

EDIT: How about a stylish cg-enhanced unboxing video to show you what’s coming? Take a look!

All that stuff (again, the same for each of the three platforms!) weighs a whopping 2 kilograms (or just over 4.4 pounds!), is practically guaranteed to sell out and yes, pre-orders for both have kicked off today. I noticed that the folks at GameStop managed to get an exclusive poster or keychain whipped up as a pre-order bonus, but I’d imagine gamers in the know will bite the bullet and go with an order from them over Best Buy, Target or Walmart if they’re really wanting one of those two items. No matter, though – in the end, what’s inside either edition is going to make those who own and play it VERY happy campers indeed. February 25, 2015 might be a cold and snow-packed day for all I know, but I’d bet if it is, a lot of people will be calling out sick from work or school just to dive into this epic (over 100 hours of gameplay? Yup, I’ll be there as well!).

Now comes the hard part for me: hoping Warner Bros. Interactive decides to do some post-E3 touring with this one with a stop here in NYC so folks like me who write about games and don’t get out to E3 every year can see and play it and spread the good word even further.