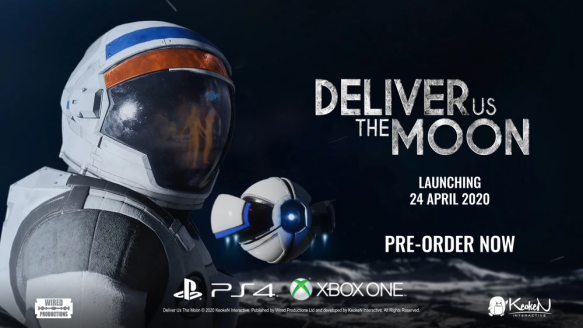 That’s going to be a hefty Amazon bill, but shipping might be free, at least if you use Prime.

I’ve yet to play KeokeN Interactive’s fantastic-looking Deliver Us The Moon, but it’s a title I’ve been following since about a year back when I stumbled upon it as a PC game. Now coming to consoles in April (PS4 and Xbox One) and Summer 2020 on Switch courtesy of publisher Wired Productions, this epic adventure game looks like the it’s right up my alley.

Well it’s also the closest I’ll get to leaving the planet anytime soon and going to the Moon, but one would guess at this point that any space travel is going to fall outside of the very, very wealthy or those interested in mostly scientific pursuits, as space isn’t for totally clueless people because of too many variables (such as “Hey! Let’s play in the airlock!”) preventing them from a successful trip there and back.

Here’s a trailer and press release for you to peruse:

Deliver Us The Moon Rockets Toward PlayStation 4 and Xbox One

We are pleased to announce that the PlayStation®4 and Xbox One versions of the critically acclaimed Sci-Fi epic, Deliver Us The Moon, is set to touch down worldwide on April 24th!

For the first time on console, Deliver Us The Moon will be available in Standard and Deluxe Editions – with the Deluxe Edition set to include the game’s epic and spine-tingling original soundtrack and a stunning 100 page digital art-book, with both editions receiving a digital and physical release.

Released in October 2019, Deliver Us The Moon has been highly praised by both critics and fans alike as both a shining example of presenting story in adventure games, and for its leading edge performance in visuals and emerging technology such as Nvidias RTX and DLSS.

Deliver Us The Moon is out now on Steam and GOG.com for Windows PC and will release for PlayStation 4 and Xbox One on 24th April 2020. The Nintendo Switch version is in development and planned for release in summer 2020.

Sounds as if we’ll be taking a little trip soon. I can’t wait.