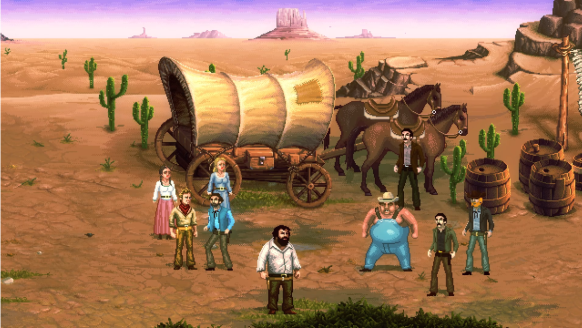 “Once upon a time in the west…” er, wrong movie, but you know what I mean… 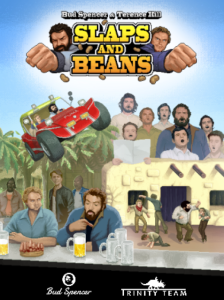 Yep, it’s here and it’s great. As a fan of old-school arcade beat ’em ups, Trinity Team’s excellent Bud Spencer & Terence Hill: Slaps and Beans ($19.99) does exactly what its meant to do and does it with a ton of love (and many slaps and beans). I’ll give those of you scratching your heads a second to look up some of the duo’s films (here you go) and admit that for some of you, they may not be your to your taste (which means you need to watch a few and become a convert to their brand of international slapstick).

The game is an absurd amount of fun as a solo or co-op experience with a wacky story line, mini-games galore and some really great music that’s worth buying on a disc if you’re a fan of what’s here. While it’s not a terribly long game, it’s one where you’ll replay it either alone or with a buddy because it’s packed with laughs and challenge on the harder difficulties. Personally, I don’t grasp at all people who only play an otherwise solid game one or two times and shelve it away, but such is the current state of gaming where hours seem to mean more than overall quality to some “gamers” out there. It makes me wonder how the deal with heavier entertainment like non-fiction books or serious documentaries. But I digress – here’s some gameplay to ogle from yours truly:

I heard you laughing all the way across the internet with me. This is good.

Levels average around 15 or so minutes each (they go by a bit quicker on Easy), but other than the mini-games, feel free to take your sweet time. The game starts out as a western, then makes a kooky switch into a modern setting as it hops into different scenarios loosely based on Bud and Terence’s films. While you don’t need to know their films, it really helps in getting some of the in-jokes and visual references. I found myself cracking up because some scenes reminded me of films I hadn’t seen in years (or decades!) and as noted, that music helped jog my memories further. 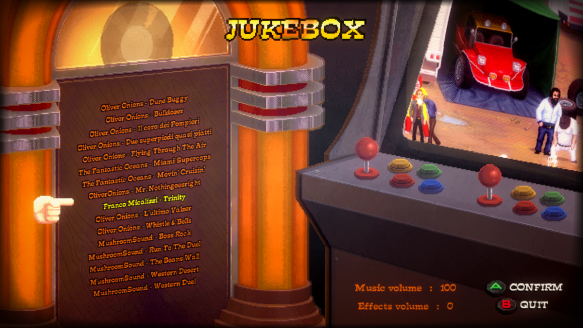 Oliver Onions is quite represented here as you can see. The rest of these classic tracks are also prime cuts.

While screenshots are fine, the game packs in so much lovely pixel art detail that it’s a master class on a few levels. I was reminded quite a lot of the late, great Will Elder‘s work as soon as I fired up the game, along with a few other illustrators you may not recognize. Animation is also excellent overall, but you’ll need to not be a big button masher to see some of the intricacies. tapping out well-timed combos and special moves lets you see the cool dodges, throws and other moves. While jumping only comes into play at certain points (by tapping Triangle when prompted), it can be slightly troublesome when your chosen character jumps up and grabs a chandelier or beam instead of picking up a beer, pan of beans or other object. This isn’t a game-killer, mind you – it’s just one of the very few issues the game has.

As for that price point? Oh, puh-lease, don’t even complain about that, kids. If this was a cartridge game circa 1993 or so or some modern “retro” game from a better known studio, it would be $40-$50 and you’d likely buy it outright because it was “one of the more fun licensed games ever made!” (or something blurb-friendly like that). $20 for all Trinity Team’s hard work is a bargain, particularly if you’re a fan of pixel art, crazy side-scrolling fighters and plenty of goofball humor. I’m hoping as many people as possible hop on board this train and grab the game because I want to see what Trinity Team can do with a bigger budget and even more passion. 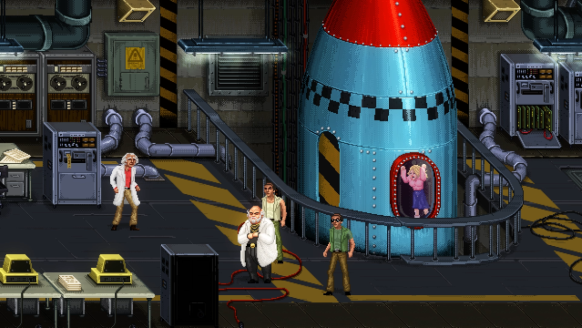 This isn’t looking good, folks. Where the holy heck are our overly dynamic duo? Don’t worry, they’re on the way soon…