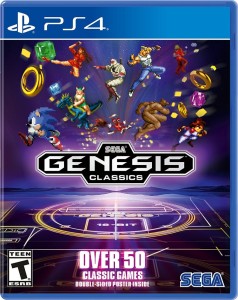 Since you’re in a hurry, here’s the short version: Yes, Sega Genesis Classics is worth the $29.99 just for the JRPGs alone, but you’re getting a whole lot of other okay to really decent to superb games for that price. Here’s something to consider before you more jaded gamers turn up your noses at this latest Sega compilation that yes, has most of the same old games you’ve either played to death in the past or just have little to no interest in. Every day there’s likely someone trying out a retro game of some sort and those who’ve never tried anything on the Genesis are going to be very well served here.

Granted, this collection is missing a few titles found on other collections (notably, the PC version which not only has a few more games, it allows users to mod and add other games as an option), there’s online play that’s not quite flawless and a rewind feature that can make certain titles too easy to beat. That said, as an introduction to a classic console, it’s quite the deal at the end of the day.

Wait. If you leave the phone off the hook, you can’t call your friends over for some couch co-op action! Oh, you need to make more friends? Okay, then.

So, what’s in the box (or download, if you do the digital thing)? Well, let’s take a look:

That’s a pretty great value, especially if you’re going into the 16-bit era cold and want a nice variety to choose from. Yes, PC owners using Steam who have this collection will notice the lack of Steam Workshop and the ability to modify and add more titles. As an ancient Sega fan with a few different collections for assorted consoles, I’ll agree that seeing the same games popping up is a bit annoying. But this set allows a few select games to be played in their Japanese or European versions in case you’re interested in seeing some minor to major changes.

Still a total classic, but the even more classic first game is missing thanks to the Sega Master System not being represented. Boo.

For me, this collection is all about the great RPGs. Three of the four Phantasy Star games, Shining in the Darkness, Shining Force, Shining Force II (this trio is connected although the gameplay in SitD is vastly different), Sword of Vermilion, Fatal Labyrinth, Landstalker, Beyond Oasis, and the oddball Light Crusader are here to eat up hours of your time. If you only played these games you’d be getting a few hundred hours out of them. The sole drawback to these games is the lack of documentation which means if you’re pulled into them, expect to do some searching for maps and hints online. That said, you’re kind of on your own with Fatal Labyrinth and its random map generation and yep, even with instructions, Light Crusader can be quite baffling unless you go watch a video or two.

Action/platform games are also well represented with some arcade ports and original titles. At the top of my personal favorites list are Gunstar Heroes, Gain Ground, two of the three Golden Axe games, Ristar, the Shinobi trilogy, Comix Zone, Streets of Rage and the Vectorman games are all excellent. The former Japan and UK-only release Alien Soldier is here (it’s hard as hell!), as are the US and Japanese version of Dynamite Headdy a very bizarre action platformer from developer Treasure that’s so quirky it defies a proper description. I never was a fan of the tepid Alien Storm, Kid Chameleon or Super Thunder Blade, and Altered Beast was a game I played so much in arcades and later on the Genesis back in the day that I haven’t gone near it until I tried it out after over a decade or so (it’s still pretty easy to beat). ESWAT and Crackdown are okay time killers worth checking out, as are Galaxy Force II and Bio-Hazard Battle, which are on opposite ends of the space shmup category (one is easier than the other). 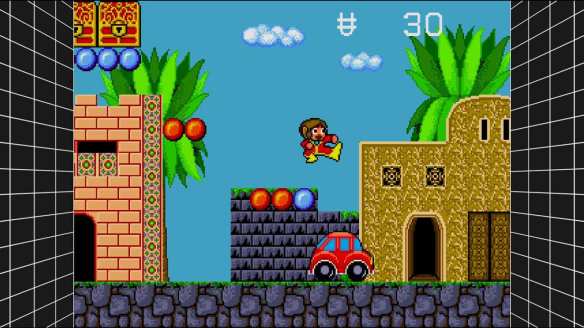 Nope, Mario will never have anything to worry about, but Alex Kidd really doesn’t care.

Of course, Sonic the Hedgehog gets a few solid games, but for some strange reason, neither Sonic III nor Sonic and Knuckles are in this set. This is baffling because the PC version has them and a few other titles. The collection also misses the golden opportunity to add in two more of the fantastic Monster World games to the two here, the original version of Decap Attack (Magical Hat no Buttobi Tabo! Daibōken), Super Hang-On, and a few third-party games developed by other studios but published by Sega (Chakan: The Forever Man, Truxton, Thunder Force II-IV, and the Ecco the Dolphin games, for example). At least both Toe Jam and Earl games are here (you’ll want to grab a friend for these, trust me).

A few match-3 puzzle games (Columns, Columns III, Dr. Robotnik’s Mean Bean Machine), Bonanza Bros. (a game I’ve never liked much, but here it is), Flicky (goofy, but addictive), and Virtua Fighter 2 (which isn’t anywhere as fun as the polygon-based arcade hit) round out the collection. I think that’s everything and I have the tired digits and bags under the eyes as proof. One thing that bugs me however: that game library you see when firing up the game has too much space on the lower shelf. It would be nice to see some sort of DLC down the road (hey, I’d pay for a few more classics). This collection also has online play, but it’s a bit wacky/wonky because you’re going to be playing against random strangers, which isn’t necessarily bad except for one crazy thing. The game also adds in a rewind function so you can roll back the action if you screw up, so playing online means if you’re trying to play one of the arcade games legitimately, you may end up with a player who rewinds and causes all sorts of havoc. Oh, by the way, you can actually rewind text portions in some of those JRPGs a bit if you missed a plot point or recent conversation. Give it a try and see for yourself.

You can either play the games as is or mess with a few emulator settings to tweak the visuals. I personally stuck with the original art or went with the bilinear filter option. Everything else was either too distracting, too sharp or too mushy-looking for my aging eyeballs. Your mileage may vary, of course. Yes, you can also add scan lines, scale out the image to fit a widescreen TV (this tends to look weird, in my opinion) and even add borders to add a bit of flair to your gaming fun. I stuck to the plain black border because everything else was too distracting. One of the odder options is to play the games on your HDTV while looking at another simulated TV on your screen (where you can apply scan lines and curve the screen to simulate an old TV). I tried this once, laughed my fool head off and went back to just playing the games so I could see them.

As far as the emulation quality, it’s quite good overall, but some of you older gamers who still have a Genesis and some carts lying around (well, I do) may nitpick over a few visual and performance quirks. Again, new players very likely won’t care at all because this vital virtual museum piece will become a favorite they’ll go back to again and again. So, yes, we’re doing the full circle thing again. Hmm… I should probably reward you all for reading this far, but I’m broke and all I have left in my pockets is this video some very talented person cooked up for Sega. Sure, go on ahead and dance around the room – I won’t tell a soul.