Developer OPQAM’s first game, Project Root was and is a pretty solid modern take on the top down arcade shooter that slowed the pace down and opened up its maps to allow for near total freedom to fly and blast enemies through some fairly lengthy missions. That game really felt like a modern take on Thunder Force II‘s top-down sections, but some critics and gamers didn’t “get” the game’s seemingly languid pacing at all, opting to call it “boring” when this wasn’t the case. To each his or her own, I suppose… but this guy thinks a lot of people got it wrong.

Still, it seems OPQAM took the brickbats to heart in creating DOGOS, its upcoming PC, PS4, and Xbox One follow up, set to land soon as another digital-only release. It’s been Greenlit on Steam and looks as if it’ll be a big hit for the Recent hands-on time with a three-mission build shows the developer has hit on a great combination of classic shmup gameplay set in an more structured open map that almost gives the game the feeling of a dungeon crawler. There’s a story here to follow about Desmond Phoenix, a lone pilot tasked with some heavy duty mission work on an enemy-packed planet, but I’ll save that for the full review later. What you need to know is the game controls like a dream so far and the go-anywhere aspect coupled with the ship maneuverability really stand out. Yes, there are bosses and mini-boss ships to face off against with players needing to shoot aerial and ground targets as they fly around each large level. While the camera is generally top-down, OPQAM notes a few cool features in the final product:

LOTS OF ENEMIES AND HARD-ASS FINAL BOSSES
A huge variety of enemies and bosses obligate you to create new strategies at every minute, ensuring hours of fun.

AMAZING SOUND AND STICKY MELODIES
We offer you a high level of sound and music originality and of course, high definition graphics. This game is gonna blow your senses away.

HIGH SPEED GAME REQUIRING THE BEST REFLEXES.
Running at 60 fps at 1080p resolution amid the chaos of alien warfare, will truly test your senses and reflexes.
So… try not Blink if you want to stay alive.

CHOOSE YOUR SETUP, CHOOSE YOUR GAMEPLAY STYLE
Ships, armament, skins, try all the configurations you want until you find the one that fits you.

If there’s an issue some will have, it’s the game’s solo play focus leaves out co-op or online fun. As a solo play fan, yours truly doesn’t mind at all. This is the sort of game one can sink many hours into and come up for air later not missing the elbow to the ribs or over headphones ribbing one gets when playing with others. That said, I’m sure OPQAM has plans to use what they learn here to make a bigger, badder game down the road. I say they look up who owns that Armada license and come up with a solo and MP homage or reboot. That game was a SUPER sleeper and truly deserves a modern reworking. 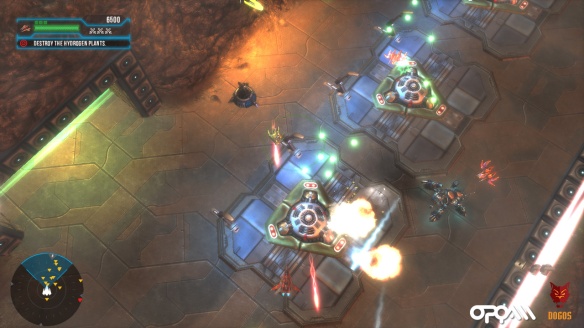 While the maps are fairly large, the mapping system is a bit iffy. It’s accessible with the caveat that it needs to have a transparency slider so you can overlay it and not block the action. Calling it up is key in finding hidden areas on maps, but some gamers with not so good eyesight may want it full or half-screen as they play. The three maps in the build were a small taste of the game’s intended 14 level total, but all left a great impression of a game that’s going to be quite memorable. Cool weapons and pickups are here, the enemies are fierce but not too overwhelming (so far), and at the end of the last mission, guess who went back and played all over again? While the price point hasn’t been set as far as I know, I’m hoping this comes in at a decent enough cost that lets gamers who haven’t also pick up Project Root just to see the evolution between the two titles. OPQAM’s proprietary game engine makes for quite a looker of a game, stuff blows up extremely well (a must, right), and the takeaway here is genre fans will have a fine example of a modern shmup they’ll be proud to show off and replay often.

Back with more on DOGOS soon – stay tuned.