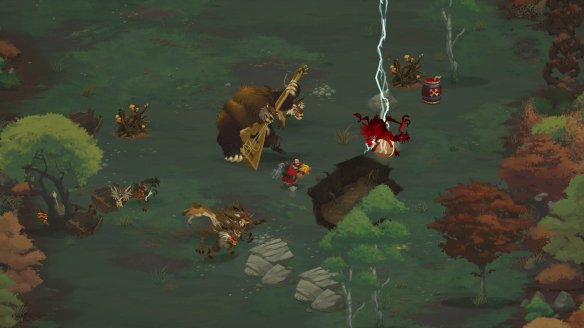 For all that balalaika ringing out, this beastie just wants to keep you warm inside its stomach…

Delivered in verse, the story is.
A nice choice, but it’s not for kids
Some blood’s here (you can turn it off)
Plus dark content might make some cough.

The brilliant writing and voices match
the music here, your ears will catch.
Painterly graphics wrap up this show
where myths from Slavic lands will flow.

You play a blacksmith with such bad luck
he’s one-armed ’cause he didn’t duck
and now is cursed to walk the land.
Problems he’ll solve with one good hand.

He’s fated to spend his bad time here
with witches binding moves so clear.
You pick a fate to trouble him
and then you set off with that whim.

That random nature hurts, but helps
you beat the foes, rescue the whelps.
It surely keeps you on your toes
wherever that cursed blacksmith goes.

While fixing things, he’s also tasked
With his Grandma’s most constant ask:
“Go find a wife to share your life”
(As if the Tzar’s decrees aren’t strife).

A black-bird will tell you to craft
So listen well, now – don’t be daft
You’ll make some gear to turn the tide
or be in for a tougher ride

But, weapons break via bad luck curse
Sometimes it seems, the timing’s worse.
Until you see that fate is tied.
All magic makes that meter slide

Now, even with less magic use
That bar will fill, and cook you goose.
Your carried weapon will just break
(and swapping it won’t make it fake).

You learn to deal (well, you’d better fast)
Escape that curse? Nope, that won’t last.
Get Yaga her gifts, aid folks you meet
Or else, it’s doom, right on the street.

Four times, you’ll play this game at least
Four paths to choose, from man to beast.
All these are based on choices made
so pick the path you’ve not yet played.

While levels could be better here
And combat seems to have less flair
The things I liked made this stand out
So buy this game! Oh, yes, I’ll shout.

Less poetic, but short and to the point:

Yaga is quite good overall. Developer Breadcrumbs Interactive and publisher Versus Evilhave a lovely and darkly comedic action/RPG here that’s worth a play for its solid visual and aural presentation, plus a really compelling, well-written story. While the combat is pretty basic, it still requires enough skill to take as few (or no) hits as possible. Controls are easy to learn almost right away and the game’s Luck system and dialog options give games a few ways to play though the game. It’s about 7 hours per play and all four paths are recommended, not only for the trophies, but to see where your chosen play style goes.

Crafting gear, upgrading your forge and making better gear is important, but be warned that you’ll lose crafted weapons when your Luck runs out. This isn’t as bad as it sounds when you realize the curse on the poor Blacksmith makes sense he’s suffering when that bad luck meter fills up. While the fighting can be somewhat mundane and that blacksmith moves a bit slow (he’s NOT Kratos or Dante), there’s a certain reliable satisfaction to be found in the game loop of craft, fight, loot, with the occasional upgrade of the forge to make better gear.

You’re a one man, one armed army, but you don’t need to fight alone is some cases.

The game doesn’t try to innovate the genre, but it does do some nice takes on a few things. If anything, the developer’s sticking to what works helps make the game fun enough for me to play through multiple times. The random nature of what penalties the witches add, plus the random levels add to the fun of dealing with foes (and friends) in the game. There’s plenty of dark humor here as well. You’ll meet a cast of NPC’s  who need your help (side quests!) and some quite physically twisted characters you’ll need to deal with accordingly, Fighting isn’t the sole option in most cases, but what you do will effect a number of things.

Bottom line, I like learning about other cultures via a few means, and Yaga clicked for me because its folktale side, gorgeous storybook visuals and stellar soundtrack made enough of an impression that the gameplay was almost secondary. That said, I did like the gameplay for keeping it simple, even though there are some flaws here and there  (in addition to the speed issues mentioned above, the blacksmith’s aiming seems hit or miss in the levels when objects block thrown axes). This one was fun to play for me and yes, I’d play it again because it warms a few parts up with a bit of nostalgia. Hearing old stories come to life is always good thing.

-Review codeprovided by the publisher