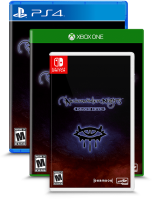 Good gravy, Skybound and Beamdog, you’re going to kill me thanks to my withering away indoors with your ports of the two Baldur’s Gate games, Neverwinter Nights, Icewind Dale and Planescape: Torment games. One definitely can’t gripe about the cost, as each game and their expansions (plus new content that was missing in the PC versions) cram in more that enough play and replay value to justify the price ($49.99 each). Pretty much, each one will take a few weeks or months to play and hell, you can’t say that about many games outside the genre that don’t require an online connection or double-dip you (or more) with fees and micro-transactions.

As I noted in my preview a few months ago, there goes my free time forever. Amusingly, I’ve not requested a review code yet because from experience, games like these games are professional time eaters (I’ve played them all before on PC years back), and well, as I sand, my free time (and hell, all of my work time) would necessitate a format change to an all-Beamdog, all the time blog. That, and yeah, I’ll likely support both companies with a purchase because I have the feeling some wags out there will feel these enhanced ports won’t be worth full price because of the dated looks and other biases against things like the length and maybe the mobile ports (which cost less, but the console versions have a number of changes that make then worth playing and then some).

Now if you’ll excuse me, I need to figure out when I’ll play these and work on my time machine so I can play them. At least Neverwinter Nights isn’t out until December on consoles, so that gives me time to play the other games.

2 thoughts on “Games I Need to Play 2: Beamdog’s Classics Come to Consoles”