Well, this looks pretty cool. I’d never heard of this game or comic character before, but as a fan of adventure games for a while, this looks really fun and noir-ish is right on up my alley and then some. Microids, Pendulo Studios & YS Interactive are the folks behind this, so I’m going to be doing some digging to see If a review code can be located. I think I have at least one PR contact at Microids, so that’s a good sign. If this one’s as good as it looks, being aboard the train will turn out to be a fine thing indeed. Especially for those of us who haven’t yet read the comic stories yet.

Well. looky here, bonuses if you want them! 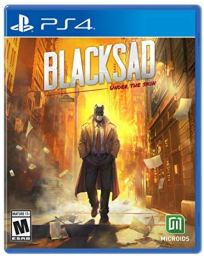 The game will be available in retail and digital formats in either standard or Limited Editions (PC, Mac, PS4, Xbox One and Switch) on November 19th, 2019.

2 thoughts on “Blacksad: Under the Skin Story Trailer: Or, I Need to Get Out More (Or Stay Inside and Read More)”