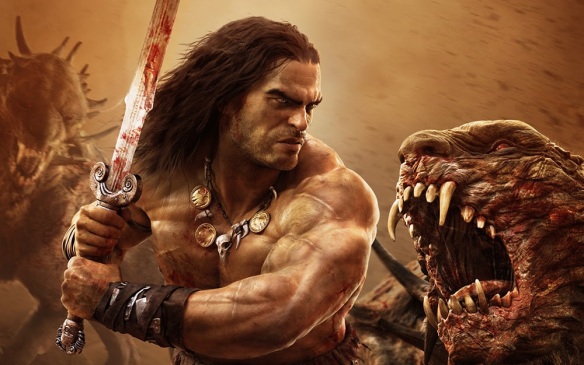 Survival games come in a few flavors these days and Funcom’s mostly solid Conan Exiles ($49.99) has that interestingly coppery taste of blood, a bit of crunch from a handful of insects and a grassy finish, all wrapped in a hide of some sort that’s been smoked thoroughly. Or something like that. The game is a rough and tumble chunk of violent fun, complex crafting (that *really* needs streamlining), endless exploration and thankfully, offline play when those too packed servers are busy.

As with ARK: Survival Evolved, the massive open world sandbox element tosses you into things nearly naked and needing to gather resources quickly or die trying. Conan pops up at the beginning to free your user-created crucified character and wish you well before you’re left to your own devices. The game prompts you onward with small to large milestones and some fast level gains for small to large accomplishments. Drinking water, finding space for and creating that first shelter, crafting your first basic armor, figuring out the ridiculously complex cooking system and more all help you get a feel for the game right away. Or at least, you’ll realize that this is a game where you’ll need to pay constant attention to even the smallest thing lest you want to punt that Dual Shock 4 through your TV. 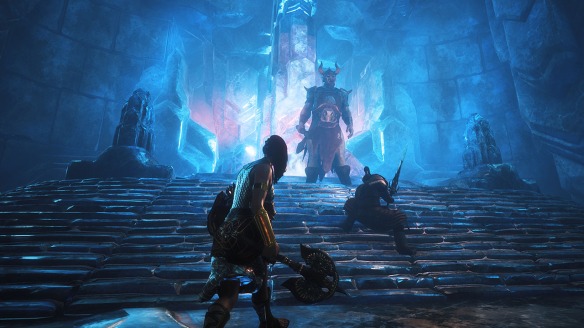 If you’re playing solo and new to these online survival games, you’ll very likely want to mess around in the offline mode before setting foot in a PVE or PVP server with other live players. While you can still die horribly offline from any number of things, learning how to do certain tasks as quickly as possible will keep your fat out of the fire. While you’ll learn the ins and outs of the combat system by fighting and trying not to lose stamina to quickly, crafting is a chore that’s too complicated at the beginning and only gets more complex as new recipes are learned. Granted, in online or co-op play, working together to build along with your thralls (more on them below) makes things go faster.

That said, the game REALLY needs to take a page from the RTS (real-time strategy) genre and allow some smaller structures to be automatically built/manually placed with a button press or two if one has the materials. So far, I’ve never be killed while building a structure, but it was close on a few occasions when ticked off creatures or humans popped into the area where I was trying to build and attacked. Thankfully, I had the sense to have weapons set in my item wheel and made quick work of them. Everything has a breaking point, food will go bad over time, and even your best structure will require repairs. The game never lets you forget about the frailty of your handmade goods, but you need to balance crafting, item storage and deciding how light or heavy you want to travel. Hint: travel light, especially if you’re on a gathering mission alone. 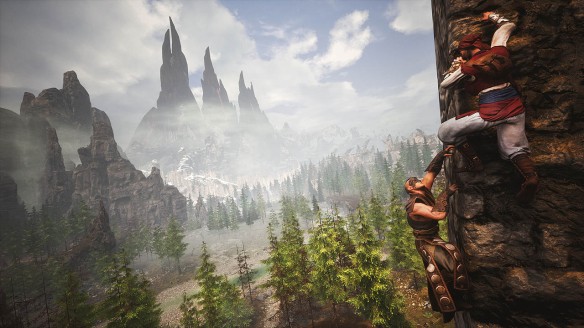 Another time, I’d built a nice, larger home that was in a really good spot near water, a pack of mostly easy to deal with creatures and a somewhat deadly cave I was planning to explore cautiously. I logged out for the evening, only to come back the next day, step out of my door and hear the unmistakable sound of something rustling around nearby. The game decided to spawn three crocodiles near my water supply and two other creatures near the patch to the cave along with other beasts that I’d not expected to be that close to where I was planning to go.  So much for that “perfect” home.

There’s a lot to see and do in this game but progression is at your own pace (well, provided you keep yourself fed, properly clothed and always have a weapon or three on hand). Night travel is always perilous because there’s nothing worse than being pounced on or trampled to death by something coming at you outside of your torch’s range or worse, from behind you after you missed whatever was lurking off to one side in the darkness. Granted, a decent set of headphones really helps out because the sound design will keep your head darting around at every ambient noise that sounds like a growling beast of some sort. 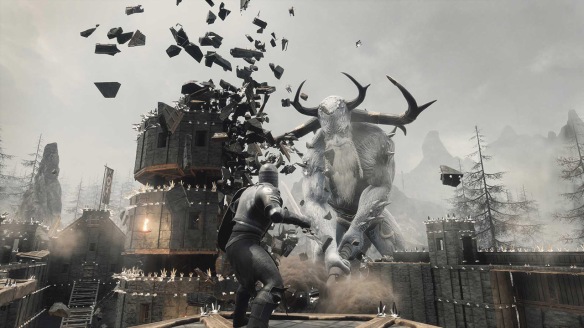 Speaking of growling beasts, choosing one of the games religions with the exception of Crom will allow you to build shrines and later, summon a rather gigantic and terrifying avatar that can wipe out pretty much entire cities and anyone foolish enough to linger in the area. If you choose Crom, however… well, you’re basically agnostic and get absolutely zero bonuses. Yeah, Crom laughs at your four winds, and nope, he won’t protect you from falling rocks or falling off a cliff. Oh, by the way, yes, I also died once from falling off a cliff after running out of room to back up after a pack of savage types gave chase. Oops.

As noted above, thralls come into play early on when you need to capture some poor sap, break them on a Wheel of Pain and pretty much make them into a primitive servant class. That’s right folks, the game doesn’t dance around this issue, although you can have a dancing thrall or a few to keep things entertaining around your growing empire. Okay, they also help out a great deal with the gathering and other aspects of the game that can drag on longer than necessary. For the record, I turned the Purge function off after experiencing one that totaled an even larger home I thought would last a bit longer and decided to keep it off after deciding to watch a few videos on how to build better structures.

Visually and aurally the game is fine overall with occasional performance issues on the stock PS4 (and PS4 Pro), some of which have been addressed at the time of this writing with two bug fixing patches. I still wish the camera had the option to zoom the view out even more because neither the first nor third person views allow for more tactical play. As decent as the game looks, you’ll often find yourself wishing your avatar wasn’t taking up so much of the screen (especially when larger beasts start appearing and you need to leg it or get chomped). I’ve not touched the PvP content outside of hopping into a session for about two hours of getting killed and deciding to go back to my safe offline space because I hate getting murdered outright within a few minutes of just trying to see how the other half lives. That and yes, your stuff can be stolen online unless it’s locked up tight.

The lore here is more of the “explore and discover stuff” school and thankfully, there’s more than enough content here to keep one busy for months. The game’s main issue is the busywork aspect that only gets busier as you need to get used to the cycle of upgrade, rebuild, hunt, store, cook, fight, expand, survive stuff to the point that you might think you’re playing an angrier version of a Sim City game set in Robert E. Howard’s Hyborian Age. I’m currently still forging on in this seemingly endless MMO adventure, camped out near a nice spot with a medium-sized home and planning to build a small fortress partially up the side of a cliff I spent a bit of time and effort climbing to see what was up at the top. No use in putting up a fortress if some jerk is going to start dropping boulders on my head when I’m tying to get a roof built, right? 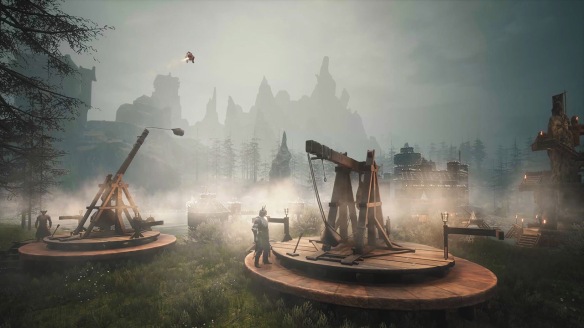