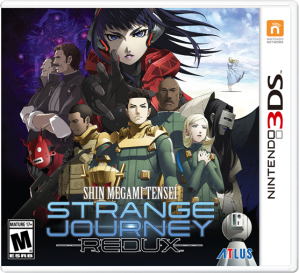 I’ve been a big fan of Atlus’ Shin Megami Tensei games for a while now (okay, close to 25 years – yes, I’m old) but I’d say one of my favorite portable entries in the series was Shin Megami Tensei Strange Journey, released back on the Nintendo DS in 2010. Like the other SMT games, the first person dungeon crawling (like some of Atlus’ early Persona games, was inspired by Sir-Tech’s classic Wizardry series), the mix of sci-fi, horror, and mature dialog all made for a pretty compelling experience. Remade and expanded for the 3DS, Shin Megami Tensei Strange Journey Redux ($39.99) still manages to be an excellent game well worth a replay or even a first experience for those new to the long running series.

New to the game are a new character with her own side story, a new multi-floor dungeon and new side missions, a great new animated intro and optional DLC (which is one reason this review is a few days later than expected). Additionally, 20 save slots (the DS game had a mere two!) allow for a bit of experimentation with the game’s demon fusing mechanic as well as let you tackle certain tough sections and deal with the potential outcomes or just mess around trying to cause demon fusion accidents, some of which can be rewarding in the long run. Oh, and for those who’ve played the DS version, yes, some of those old demon passwords still work. 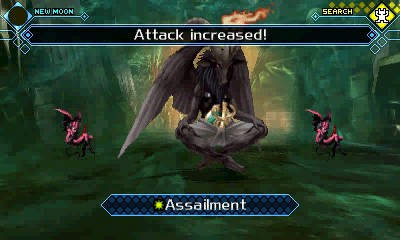 For those who just want to enjoy the story’s many twists and turns, Casual mode is also new, but don’t think it’ll go easy on you in every area. Sure, it lets you scan demons one time instead of twice and yes, some of the bosses are less murderous. But the core mechanics are the same throughout and while the game is indeed easier, it’s also great enough to get you to want to try the harder modes out once you’re all done. Or, yes, you get a New Game+ mode that lets you carry over earned money, demons and other stuff should you want to fire this up a few more times. Oh, that Mature rating is for some ear-burning dialog, so if you’re getting this for a kid, you may want to expect a few snickers from them. Some of the half-dressed demons aren’t really a negative, but hey, I took life drawing classes way back in the day, so that stuff doesn’t faze me one whit.

The story has an international group of soldiers and scientists assembled to take four specialized vehicles into a spatial anomaly called the Schwarzwelt which has appeared in the South Pole. The anomaly has been expanding and across the overcrowded earth, violent events have begin to multiply. A scan of the anomaly reveals some very earth-like similarities (albeit a bit more chaotic in nature) and of course, the four ships end up in deep trouble as soon as they take to the skies and enter the Schwarzwelt. As one of the survivors aboard the Red Sprite, it’s your job to discover what went wrong as your team searches for survivors from the other ships and tries to escape from the anomaly.

The Red Sprite’s crew ends up having to delve deeper and deeper into the Schwarzwelt in order to discover the fate of the other ship’s crews while also discovering how to deal with assortment of good, evil and neutrally aligned demons that populate the anomaly. The excellent demon art here is by the always great Kaneko Kazuma whose art direction for me defines the SMT and Persona games much more than the newer installments. Don’t get me wrong, though. The art style in these games has always been quite spectacular over the decades. It’s just that Kazuma’s mix of sexy, functionally weird and dangerously deadly still works as well as it did back in 1992 to the point that many of his demon designs are still used today to the point of impacting the games he hasn’t worked on.

The core mechanic of meeting, becoming allies with, and fusing demons keeps the game always interesting for a few reasons. You’ll need stronger demons to survive the increasingly challenging dungeons, demon skills can be migrated by fusion and hell, it’s just a blast to read the descriptions of each demon as you encounter them. I liked that some demons will ask to join your party, get huffy if you have no room for them (you can get them later once you clear a space) or in a few cases, force their way into a free slot. For example, if you talk to a Jack Frost, don’t have him yet and tell him he’s a mascot character, he’ll be adding himself to your roster before you get a chance to blink. The sole sore spot is for some reason you can’t just see the demon images in the game’s Compendium without text partially obscuring them (boo!). But I’m hoping this is something that can be altered in a future patch.

Oh, that’s a Landmaster, alright (see below for video proof)

If you know your movie sci-fi well enough, you’ll catch interesting influences in the game from John Carpenter’s The Thing and They Live in indirect but noticeable ways. Probably the most amusing influence are the four ships are very clearly modeled on the Landmaster from Damnation Alley, which wasn’t a great film at all, but had a memorable enough centerpiece in that all-purpose ride that it’s in the game as a major element. I’ll give the dev team credit for going back that far and more or less redeeming that film, but you kind of don’t need to see it to supplement the game experience at all.

As for the new character, Alex, and her contribution to the game, it’s a addition that works well for the most part. She definitely makes quite an impression when she pops up in Sector Bootes (no spoilers here!) and ends up with a pretty interesting side story to tackle. There are a series of battles with her and a few other bosses that can be pretty tough unless you’re well leveled and have some decent demons. Granted, the dungeons use a lot of traps, directional tiles, locked doors and good ol’ generous size to keep you busy. But overall, I found the maps to be a nice addition that added length and some challenge to an already lengthy and challenging game.

The DLC adds a few free items worth getting if you’re firing up a new game (some are a bit less useful for players seeking top-tier goodies), as well as some paid content that adds some nicer items. If you’re going to grab the paid content, just buy the $6.99 pack and get them all because it’s cheaper than buying one pack at a time and trying them out. None of these items will have you blowing through the game, though. It’s those aforementioned password demons that will be your best friends provided you have the Macca to summon them after you use those passwords.

Between the demon fusing, the dark plot themes (things get surprisingly religious on occasion) and multiple endings based on a few key choices you’ll make, this is a Strange Journey well worth taking a few times. While I’m not one to tell a developer what they “need” to do, It would be a more than welcome sight to see this series show up on more powerful consoles at some point because it’s far to solid a series to be confined to a handheld that while hugely popular, is being eclipsed by Nintendo’s newer kid on the block.