Ha. You should see my inbox and backlog. You’d scream. A lot. Especially at all the scary games that try to elbow each other in the eyeballs for attention. Some of these end up beign great, some not so great, a few even end up like broken dolls you want to keep because they have promise but need to be taken to the toymaker and fixed up a bit. Anyway, here are (well, three at a time in this series) some quick looks at a bunch of games I liked that you may want to try… if you’re brave enough.

A Room Beyond: Currently up to its second of five chapters (the first one is free), René Bühling‘s excellent, distinctly smart psychological horror game does its frights up right, using a superb, intentionally crude yet perfect and gorgeous “2.5D” pixelated visual style that actually amps up the chill factor considerably. The experience is pure classic adventure/exploration game with a Lovecraftian vibe creeping throughout its narrative, but combat against creatures is a necessary and well-implemented evil in the second chapter.

From the opening moments when your character wakes up trapped in a cave and makes his way down that winding hill to a foggy village with some very strange residents, there’s a sense of uneasy dread that something terrible not only will happen, but has happened. Your character is tied into all this somehow, of course. But despite his hardiness and good intentions to help out while trying to solve his own mystery, in a way he seems not quite prepared for what’s coming. In other words, I’m hooked in for the long haul.

The official site notes A Room Beyond is “A novel story of crime, mystery and life-philosophy is told in five episodes which finally reveal into a complete story line,” which sold me right away. You can try out the FREE demo on Steam (highly recommended), but if you’re already a big horror game fan, I say just pay the $6.99 for the current build and play this at night with the lights out and a pair of headphones on for best results.

Detention (demo): What is it with haunted schools in so many foreign-made games? I’m taking it a few very talented people REALLY had a hard time with all that pressure to succeed and the intense drive needed to do so. Well, as long as that suffering brings forth creativity like this, it’s worth it, I say.

I’d never heard of Red Candle Games or it’s disturbing side-scrolling horror adventure game until I was poking around on Steam and it popped up in the Greenlight section. The trailer and screens looked great, so it was off to try the demo out. Let’s just say that between the slick website that promised a terrifying experience to the slow-burning demo that indeed was a terrifying experience, I didn’t mind spending time cooped up in an old school with creepy goings-on and bizarre creatures making me too jumpy to continue.

The 1960s Taiwan under martial law setting allows the game’s creators to slide in some jabs at that era’s particular madness while giving players a distinct visual and animation style that delivers an immediately unsettling vibe right from the start. Adding to the dark tone of the game is an excellent score by Weifan Chang that will creep into your bones while making you grin at how accomplished it is. While there’s no word on when the full game will drop, Detention is well worth a look and play, as it’s one of the better made indie horror games I’ve played this year. 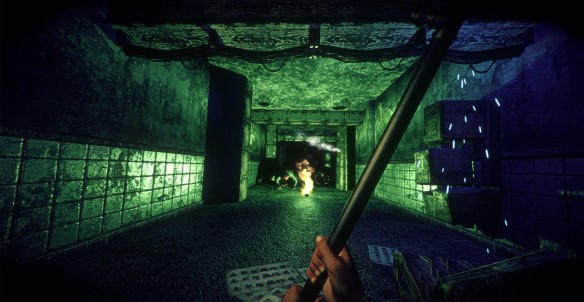 Phantasmal: City of Darkness: Oh, yes… this one. Eyemobi Ltd. (Joe Chang, Елена Ярошенко, Jeffrey Chilberto, Kit Chan, David Cummins) put out a total nightmare circus of first-person horror action that while loaded with great stuff, was initially marred by a few technical issues. Over time, it’s been polished up and improved to a better game well worth your time if you like being scared out of your mind on a regular basis.

Procedural generation means you’ll not play the same game twice, but even if you did, the sheer number of fright moments per minute combined with the random nature of the monsters you’ll face makes every play a jitter-fest where you’re too freaked out to move… but not moving fast enough will get your character killed.

The game has been dubbed a “rogue-like” for that randomness, but I prefer to call it a “run-like” myself. As in “run like hell!” when you can while playing. Of course, the stealth mechanic implemented here is in for a very good reason. Make too much noise or shine that flashlight at the wrong time and you’re deader than that lousy wooden plank you got stuck with because you ran out of ammo a few rooms back and have been hoping you’d make it to a new area of that ruined Kowloon city. Nope.

Anyway, my hope here is that Eyemobi gets a console deal going so I can play this from a few MORE feet away. Having hideous arm-less things and other horrific, fast moving creatures up in my face has been hard on the bladder. Phantasmal will set you back a mere $14.99 on Steam, adult diapers not included.

That’s it for today, folks. Tomorrow, three more scary games take the spotlight. See you then.