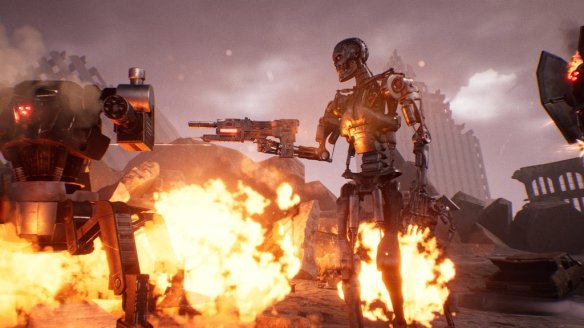 Hi!  I’m Darryl and this is my other brother, Darryl and we’ll be killing you in a sec…

Well, isn’t this a big surprise?

Reef Entertaiment‘s shockingly good Terminator: Resistance ($59.99, PS4) is the best game in the long running series of games based on the franchise since the one-two punch of Bethesda’s two very solid PC games, The Terminator: Future Shock (1995) and SkyNET (1996). What’s so astonishing is this new game’s developer Teyon is responsible for 2014’s RAMBO: The Video Game, which was raked over the coals critically for a number of issues, with being a simple rail shooter where movement was automatic and had too many QTE (Quick Time Event) sequences and some technical woes some of the biggest problems.

The Polish developer (who also has a branch in Japan) has been around since 2006 making a number of games for multiple platforms and to me, they’re a tiny bit like Cauldron, the Bratislava-based developer who made a number of journeyman-like titles across multiple platforms for a few publishers over the years. Whatever budget they had to work with here, Teyon really took the Terminator license seriously, going back to the first two films for inspiration and knocking it out the park as a result. Interestingly enough, there’s a even a Bethesda Softworks touch in the interaction scenes with other characters as choices you make affect a few outcomes and even the lock picking mini-game is lifted from the later Bethsoft-made Fallout games.

Now, the game isn’t perfect at all, so let’s talk about some of its issues first. The FOV (field of view) is a little tight and unchangeable, so it’s a bit claustrophobic at times when moving, especially in tight spaces. Some of the visuals tend to be a bit bland and dreary, but then again, these are mostly destroyed areas we’re talking about, so this isn’t supposed to be a paradise of shiny, picnic-friendly maps right? There’s no climbing or vaulting mechanics, so outside of cut scenes, navigation is all move, stop, take cover, shoot stuff and talk all mixed in with stealth sections, the latter which make for some super-tense moments. Finally, the game can be too easy on the hardest difficulty if you’re an expert player and level up those Skynet-issued Terminator weapons you later find and it’s all “You’re Termimated”, but with some bad-ass guns instead.

That said, what an experience it is even with those problems, none of which kill the fun, by the way. Teyon’s commitment to making the game they wanted to play reveals a game that’s not raising any creative bars at all, but taking parts of what works in the FPS genre mixing them with some light RPG bits and running with it at full tilt. The maps are laid out well, combat varies between stealthy avoidance areas and those where you can choose to blast almost anything you see fit to, and wait, what? The game even tosses in well-done and tasteful sex as a plot point. Yeah, you heard that right, and my head is still spinning that Teyon did this so well.

Uh, that’s LOVE for you, I guess. Good going, Teyon. 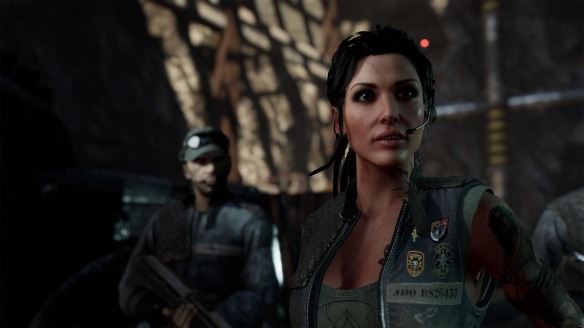 I was going to make a joke about the Resistance not holding up against the power of LOVE, but she’s looking at me as if she’ll beat me up. so…

To me, the answer to all this is a simple one. Too many more jaded folks today seem to think that “innovation” is a major key to a successful game along with visuals that have to be the latest and best there are. In the case of this game, both things absolutely defenestrate themselves because this isn’t at all the most innovative or best-looking game out there. But man, is it about as flawless as can be in its presentation of the subject matter. The game sets itself up as a prequel to the first film and nails it so well from start to the multiple endings that you’d believe James Cameron popped in from the past (or was it THE FUTURE?) to work on it. Even the music sets you back into 1984, with composer Chris Detyna spectacularly adopting Brad Fidel’s memorable main theme and making it resound even more.

Gameplay is also familiar on a few fronts, but while you do get those Terminator weapons at some point and there’s even a special knife that allows you to sneak up and one-hit some T-800’s, you can choose not to do some things and make the game geometrically more difficult. Now, you HAVE to have those weapons Skynet uses because they’re the sole means of destroying Terminators, although hacking certain terminals helps in some areas. But crafting, searching around for supplies and a few other things are optional. But I say if you’re paying full retail for a game, you want to get everything you paid for, correct? You’re welcome.

You can blast and sneak your way through this in about 8 hours or so, but this one’s a game I’ll go back to because there are a few ways to play (as I noted, choices matter) and I didn’t unlock everything the first time through. I suppose some will whine about the lack of multiplayer modes, but this one really doesn’t need that noise. The story is well done and just might get you to re-watch or even watch the first two films, sliding this one in as an interesting bit of canon, but not fodder. I have to give this one an Arnold-sized thumbs up for getting it right, especially as much larger studios haven’t made something this good with the license for decades. It’s not innovation that was needed, but passion for the source material that went a good long way that makes this game work.

Er, about the marketing, though. Well… that part could have been handled better, as the game pretty much turned up without much of it on PC last year or PS4 and Xbox One this year. Then again, given the tendency these days for some people to automatically hate on a publisher or developer for an earlier misstep, maybe word of mouth is the best way for a game like this to survive and thrive as an evergreen title of sorts. Terminator fans who haven’t seen this one before should be surprised and pleased as punch at what’s here. Recommended.

(I bought a physical disc version from the UK, as it was cheaper than the download, will run on any PS4 and well, I thought it wasn’t going to be as enjoyable as it turned out. It’s good to be wrong sometimes!)