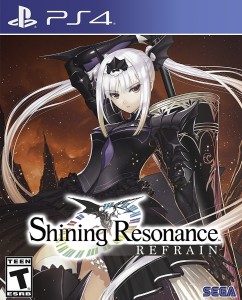 As a longtime fan of Sega’s Shining series (the import version of Shining in the Darkness was the first JRPG I completed way back in 1992), it’s been quite interesting (to say the least) watching the series evolve over time. While the first game, the assorted Shining Force entries, Shining Wisdom, Shining the Holy Ark and the portable Shining Soul have been the most engaging, some of the games localized after that point fall into the hit or miss category.  The last three I played, Shining Tears, Shining Force Neo and Shining Force EXA traded in the first person dungeon crawling found in SitD and Shining The Holy Ark and the more strategic play in the Shining Force games with seemingly simpler hack and slash action against some very powerful enemies that made combat quite challenging. While there was some enjoyment to be found in these despite a few flaws, the bloom was definitely not on the Shining rose during the PS2 era.

Shining Resonance Refrain ($49.99) isn’t quite the return to glory the series needs, but this enhanced port of the 2014 PlayStation 3 import manages to be quite enjoyable overall. Developer O-Two took the Media Vision original PS3 game and added an all new “Refrain Mode” that allows players to experience the game with two of its main foes as playable characters along with what seems to be a nice load of included  (on disc or as part of the digital download) DLC content added at no cost across all platforms. Yes, it’s best to explore Refrain Mode after you’ve played the main game, as plenty of spoilers abound. But if that’s your thing, you do you, I say. It’s also the first time a new game in the Shining series has appeared on current-gen consoles and PC and hopefully, it will do well among JRPG fans on those platforms.

The game hits all the expected notes many JRPGs take these days from lengthy expository scenes, a cast filled with familiar likable to annoying characters, a decent combat system, and more than enough strangeness that might knock the wind out of the sails of those new to these types of games when they see some of the game’s kookier moments. When your party members or enemies break out into song as part of an attack, it’s more than clear you’re not in Kansas anymore. But if you surrender, Dorothy, it’s all in good fun at the end of the day. 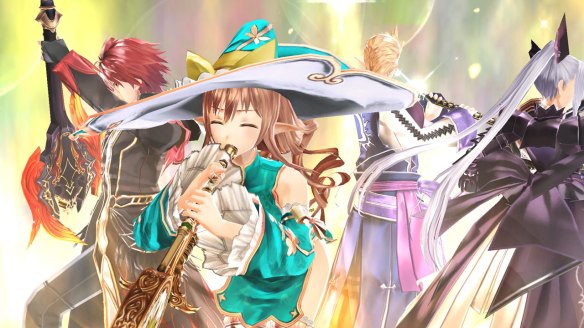 Slaying the crowd (literally) with some righteous tunes? All in a day’s work in this game.

The story rolls out in plenty of the aforementioned lengthy to really lengthy cut scenes where you’ll generally be bombarded then buried under a ton of information. Thankfully, there’s a dictionary that fills up with lore as new plot points, characters and monsters are unveiled. In short, main character Yuma Ilvern has been hiding his true persona as the legendary Shining Dragon, but after he’s captured and held by enemy forces then rescued, he decides to use his powers to take on those who imprisoned him. Okay, there’s a lot more, but this one’s a case where you’ll need to play it and see where it everything lands.

Environments are pretty large here, but the game is full of invisible walls that limit your traveling somewhat. It’s too bad, as most maps would actually benefit from a jump button that would allow players to explore a bit more. No matter where you go outside the main village however, you can expect to be assaulted by a nice variety of enemy types. You can sneak on on monsters and get in surprise attacks or they can do the same to you. You’ll need to be careful as the game doesn’t let you see how many enemies you’ll really be facing until a battle starts, which can lead to some perilous situations when engaging enemies of a higher level or you face too many at your own level and get overwhelmed. Fortunately, escaping is easy in most cases and sure, you can “farm” levels by leaving and reentering areas if you like. 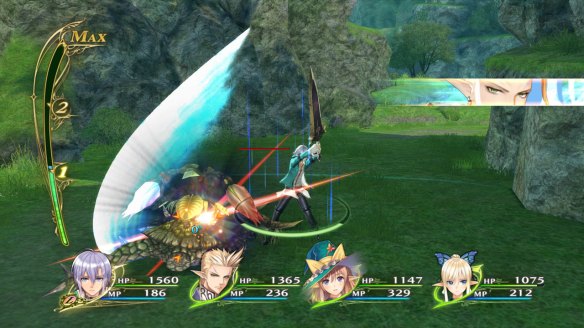 (sings) “It don’t mean a thing if it ain’t got that swing…” Okay, no classics like that are to be heard here, but the soundtrack is pretty nice nevertheless.

That said, there’s a healthy chunk of generic anime/manga personalities and characterization going on throughout the game, so expect few major surprises during the ride (unless you’re very prone to major surprises, that is). At least the combat is pretty reliable and very enjoyable, lifting elements from Bandai Namco’s long-running Tales series and a bit of the Star Ocean games, among a few other action-based JRPGs. While you can keep Yuma as the party lead for most of the game, switching up with other members lets you control them while the other three members of your party act as AI-powered battlers. You can either let them act as they wish, or tinker with a few combat options as part of the fun here is messing with every option the game doles out as you play. Yes, you can indeed rely on the simplest combat options for much of the game. But some bosses or playing on a harder difficulty from the start mean you’ll want to mix it up a bit.

Overall, the game doesn’t really do anything “innovative” with what it brings to the table, but it really doesn’t need to. There’s a solid and reliably fun time to be had complete with the ups and downs you expect. YES, there’s a dating sim element, but it’s not crude or offensive in any way. Hey, Yuma has it bad enough from the start when one of his rescuers, Sonia Blanche, refers to him jokingly as the “princess” she has to rescue. Yuma’s a bit of a cypher for a while until (and often after) he gets his dragon groove back. But even as he becomes more confident as the adventuring continues, he still shows some of his quirks (as do the other party members he’ll meet up with). 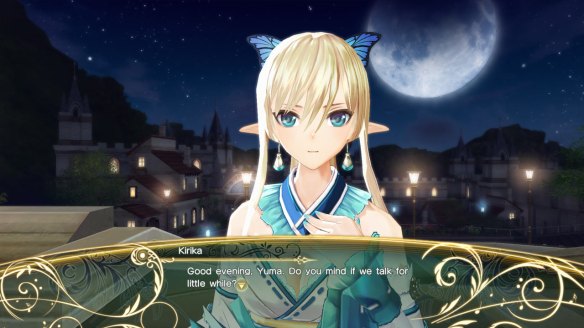 When Kirika says she wants to “talk for a little while” she’s kind of about to bend your ears until they resemble hers. Just nod, smile and keep playing.

As this is a primarily straightforward port of a PS3 title with some new content, it’s not exactly going to blow you away with its visuals if you go in expecting to be floored by every visual element. It looks fine to me, but that’s a case of seeing gameplay and trailers from both versions on and off over three years and knowing things weren’t going to be anywhere near “suupa HD-ified” remake territory. Graphics are clean, colorful and bright when need be, but the villains get a nice darker visual look that suits them, adding a nice balance to things. To be fair, if you stack up what’s here with an older (and more musical-related) JRPG like Eternal Sonata, you’ll find that that game’s use of color and its art direction still kills it some ten years after its release.

Musically, the game is pretty easy on the ears with quite a catchy soundtrack (and yes, you can buy it from an import shop if you like). English or Japanese voices can be selected as well, so feel free to try out both and see, er hear what you prefer. As “epic” as the game feels at times with all that storytelling on display, it’s more of a mid-sized concerto and not a complete opera. That’s fine at the end of the day because we’re finally getting a game many have been wanting to see appear for a few years. Given that this may (hopefully) kick off what’s hopefully a Shining resurgence if it sells well enough (and there’s a potential title for you, huh?), let’s hope enough new and old fans of the series give this one a shot and find it worthy.