I’ll admit straight off that I’ve been a big geek for MercurySteam‘s games ever since I got a review copy of American McGee Presents: Scrapland way back in 2005. Their attention for detail grabbed my eye and I’ve followed each game they’re released always looking forwards to what the team can cook up. Currently, they’ve two big games out or on the way, Metroid: Samus Returns (Nintendo 3DS) and Raiders of the Broken Planet, currently in beta on PC, PS4 and Xbox One with a release date set for its first of  four campaigns September 22.

As I’d been slowly killing off my MMO/online gaming phase (not enough time, too many me-too game, no way to enjoy them offline), I initially planned to ignore this one until I found out it had a solo campaign mode as well as a unique “4 vs 1 counter-operative campaign” that lets you play both sides of the conflict if you so choose or team up with friends to tackle some challenging missions against really pesky AI opponents. While the beta had a few matchmaking issues online (hey, it happens!), the gameplay is quite fun and very challenging in terms of solo play.

Two solo missions were playable after completing a brief tutorial and both bring trouble for the unprepared. The current cast of characters plays differently from one another (the game will recommend who’s best for a mission), but the goals in each map are the same. That said, just rushing into areas and trying to shoot everything up is a surefire way to die. Using the auto-cover system, well-timed melee attacks and reloading at the right time all come into play.

The game takes an arcade-like approach to dying – three lives and it’s over unless you can survive a timed section where you need to avoid damage while additional lives are generated. Playing on the harder modes quickly sent my chosen character(s) off to wherever dead space mercs go, but bumping the difficulty down got me a few rewards and a chance to get through the beta without beating up my PS4. As noted, matchmaking was a bit problematic (there were somewhat long wait times), but hopping into Antagonist mode made up for some of that. Here, you get to join an enemy AI team and take on other Raiders, so the game is less 4 versus 1, but 4 versus 1+ a whole pack of enemies. I’m not much into raid-style invasions or PvP stuff, but this was fun despite a few quirks.

Visually, the game is gorgeous, with skippable cinematic sequences (you’ll want to watch them just to get more bits of the story) and nope, that Mature rating isn’t for show, kids. Ear-burning foul language is commonplace and there’s not a nice person in the lot if you’re looking to find someone to digitally cuddle. Then again, everyone’s cranky attitude fits the whole mercenary vibe perfectly. These are angry men and women doing work for people they may not even trust. Hell, you’d probably tell your boss “go **** yourself with a can opener!” if you found out you were on a potential hit list, wouldn’t you? Uh-huh.

While the beta was decent overall, it’s in the final code where things will need to fall into place. That upcoming free prologue as well as the first campaign’s low price point of $9.99 are tempting enough to grab the game for the solo play mode alone provided it’s got more mission variety and can spin a compelling story outside of “pissed off space mercs shoot other pissed off space mercs in the face.” That said, the tie-in digital comics plus the unlockable lore and character story sections promise something more than the usual online shooter. I’m still a tiny bit wary of playing online at the mercy of someone’s schedule, but I may poke around with this and hopefully get a few like-minded friends to give it a try. 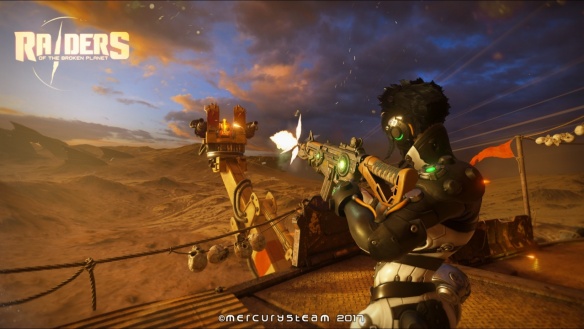 Granted, the online shooter market is packed to the gills with certain AAA releases and well-known indies doing well while others fall by the wayside thanks in part to fickle gamers who on one hand want change, but on the other, want to play the same types of reliably fun shooters. MercurySteam has an uphill battle ahead of them, but it’ll be great to see the developer score a longer term evergreen success if enough players are willing to hop in and check out the finished product. We shall see, as usual.