Back for more, are we? Well, then. Let’s amp things up a notch with some scary stuff that has you killing or being killed in gratuitous or thoughtfully gratuitous means. Or something like that. I guess what’s here is kinda NSFW unless you work at some place like your friendly neighborhood abbatoir, morgue, or cemetery and/or have a morbid sense of humor, hee-ho!

UNLOVED: Yikes. So, you want to run around in the dark (perhaps with up to three others) equipped with a handgun and flashlight looking for better weapons, armor, and colored keys while trying not to to get keelhauled by some fast-moving, ugly as sin monsters? Good. This game’s got your name, number and full address stamped all over it.

Nope, it’s not 1993 all over again, but UNLOVED sure rocks it like it is. Paul Schneider took his original Doom II mod and completely remade it using Unreal 4 to great, gory effect. As a solo or multiplayer experience, the game is wickedly fast, controls as expected (yes you can have at it with k+m or a controller if you like) and definitely not for the squeamish or easily startled. Or perhaps it IS, as it’ll surely prepare you for anything jumping out at you in the real world.

There’s an interesting rewards system at play as well where you can sell off gathered trinkets for assorted useful goodies. That said, a bit more character customization would be nice, as other than outfit color, EVERY player model is some generic white guy with sunglasses, making playing with others look like a Falco video with assorted guns set in a carnival horror house. But even if you just come for the scares and enjoy the ride (and dying a lot), this is quite a rush worth the $14.99 cost.

The Other 99: From a purely visceral standpoint, Burning Arrow’s first game is quite unforgettable, but still needs some polish and tweaking to be “just right.” Your avatar wakes up on an island with a note that simply says “THE ONLY WAY OFF THE ISLAND IS THROUGH THE OTHER 99” and it’s all up to you to soon figure out you’ve got to get to disposing of a bunch of people if you want to see your family again.

And Then There Were None crossed with Battle Royale, The Most Dangerous Game and what I hope the final season of Survivor (a show I’ve actually never watched a full episode of, but despise the concept of) turns out to be? Count me IN.

A few caveats to be aware of, though. While the dark theme is indeed a compelling enough reason to grab this one, a few bugs and combat-related issues knock it down a few pegs. These are being worked on as we speak, though. Also, you’ll find that you don’t really need to knock all 99 bottles of human-sized beer drinkers off the wall before the endgame and that things are surprisingly short. That is, unless you’re a slow player who likes to explore in between disposing of those trying to interrupt your exploration. In fact, if you have a twisted sense of humor, you can consider this game a “Get the hell out of my way, I want to see the damn island!” simulator as you take out those keeping you from enjoying the sights and screams.

So, yeah, if you do buy this Early Access game and someone at your real-life job asks “Sooooo, What did YOU do on your summer vay-cay?”, you can smile broadly and say, “Oh, I just killed a bunch of people while exploring an island… in a videogame. You?” Chances are they’ll have warped out of that conversation before you mentioned it was a game you were playing. If not, just walk backwards on the way home the rest of the week as you’re probably being stalked yourself… eek. 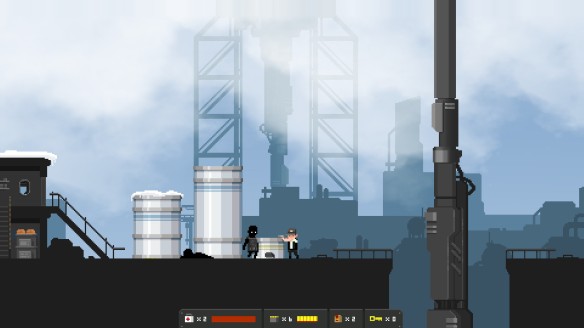 The Final Station: Part train simulator, part post-apocalyptic survival/exploration game, all fantastic, developer Do My Best and always reliable publisher tinyBuild have put out a bleak mini-masterpiece of mash-ups.

Super-dark story that will appeal to the more mature gamer who doesn’t want EVERY damn thing explained, the game has you taking a train down a series of tracks as you pick up survivors and try to find supplies to keep heading towards your final stop. The pixel art is great here because the simple style still leads to some scares when you step outside for survivors or supply seeking only to discover infected humans to kill instead.

The great thing about this one is paying attention during its five or six hours is key to understanding a few things that make the experience worthwhile. Eavesdropping on conversations leads to information, each stop is fraught with minor to major frights, the train needs constant maintenance as do all of your precious passengers. Everything here falls into place nicely, although yes, the game does get a bit task repetitive as it plays out.

Then again, the crushing reality that yes, driving a train full of starving survivors is indeed a heavy burden is something this one NAILS. Particularly when you get to the ending. $15 on Steam for a haunting shot of a future no one wants? A pretty decent deal, but have something funny handy to watch or read afterwards.

Which reminds me… tomorrow, we go for some laughs with your bloody bits. “Y’all come back now, y’hear?”

Review codes provided by the publishers.