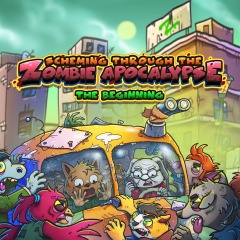 Disclaimer: Zombies as portrayed in the media aren’t a real thing at all and if you’ve been paying attention, apocalypses (other than the cosmic variety) are kinda man-made messes these days.

That said, in Scheming Through The Zombie Apocalypse: The Beginning ($4.99, also on Switch, Xbox One, and PC) some really hilarious and crude content awaits in this game where an old cartoon rabbit called Hank and his younger mutt friend Larry, scam fellow animals to do their supply runs in this really fun and short (because it’s presented episodically) game from the fine folks at Entertainment Forge, GrabTheGames, and Ratalaika Games. The funky cartoon style and limited animation recall something you’d see in an underground comic or during Cartoon Network’s better years, the script is pretty funny, and the game is memorable enough that you’re left wanting more (and more is on the way).

As the game begins, a (or The) zombie apocalypse has started, and buddies Hank and Larry have plans to hole up with Hank’s storage of a year’s worth of food plus some movies to get by (and yes, some drugs). Four months later (oops), they’re out of supplies, the power has been turned off (it’s actually one of the first things that happens) and Hank and Larry have to brave the outside world to get new supplies, starting with the wrecked shop across the street from them. Poor Larry is the first guinea pig, as Hank’s a bit slow (and he’s got the binoculars) and he survives, only to run into a drunken parrot and two easily pissed-off bulls who demand they give up some of their hard-gained loot.

What’s more important when the world has ended? I don’t know about you, but I’d take TP or bandages over the cigs, especially if it’s 2-ply.

This trading becomes an important game element as from their van, the pair con other helpful animals to gather supplies using a stolen map that shows different locations where supplies can be had with a bit of risk. You also have to cut a percentage of the loot to your temporary pals, so there’s an element to consider in scamming someone or making a fair deal. Yes, there a trophy for keeping everyone alive (I was pleased to see this one pop on the first try), but I found out on replaying that you can indeed, lose an ally if Hank chooses the wrong dialog option in some cases.  The UI takes a bit of getting used to as it seems to highlight text incorrectly until you realize what’s going on. It took a few minutes to get this early on, but fortunately for poor Larry, he probably got a beat down because I chose an incorrect response on a few occasions in the first area (oops… but it was funny).

The game is amusing enough to recommend although those fast Trophy hunters out there might get dismayed that the game has to be played more than one time to get everything.  I personally don’t play these short games for the rewards at all. This one stood out for the art style and M-rated plot, plus the “survival” elements and trading were easy to grasp and explained pretty well. That and the game really makes you want to shell out for the other parts because crude looks aside, it’s got some quality voice acting and Hank’s salesman past comes in quite handy… except when Hank accidentally or intentionally (and hilariously) insults an animal or gets in trouble through his scheming.

So yes, it’s another budget-priced winner from Ratalika Games here, and a nice surprise overall. I can’t wait to wee what comes in next part, but for now, this one’s a solid, fun and yes, somewhat Mature time while it lasts. Highly recommended if you’re open-minded and can take the art style and M-rated content. Oh, and the replay value here makes it a must as it’s a game with a few possible outcomes thanks to Hank’s attitude and your own willingness to try out a few responses. When’s the next chapter due on consoles? Soon, I hope… at least before the world ends.

“They’re the people that you meet, when you’re walkin’ down the street…”