You’d best believe I uttered out loud (to no one in particular) “Wait, there’s a Dark Quest I out there somewhere?” as soon as that email I recently received about Dark Quest II ($14.99) landed in my inbox. I took a look at the brief trailer on YouTube and yes indeed, put in a code request because all sorts of nostalgic switches were flipping in my brain.  A few days of playing this later and I’m very pleased developer Brain Seal Ltd took the time to craft this hard to put down throwback of a keeper.

If you’ve been around the RPG block for any decent length of time, you know the drill: Evil sorcerer doing evil things socked away in his castle, a hero strolls up to the gates, yadda, yadda, yadda – you’re in deep dungeon doo-doo, make new allies along the way and it’s a fight to the finish against that mad magician and his kill-crazy minions. Granted, this game will be a hard sell to some stubborn ones out there who think console or PC RPGs started sometime in the 90’s or early 2000’s, or who’ve never played either classic Dungeons and Dragons, the old board game HeroQuest, or Hero Quest II: Legacy of Sorasil on the Amiga.  DQII wraps these three influences together, adds in some lovely artwork and ties everything together with an appropriately nifty audio experience that seals the deal.  The stripped-down to the basics gameplay here had me grinning through surviving encounters by a hair and even relishing a defeat or three just so I could retry a quest and try new strategies to win.

For players new to this particular style of game, you’ll need to be aware of a few things such as despite the isometric viewpoint this isn’t a “Diablo-style” chase ‘n chop nor any sort of action/RPG in that vein. Combat is turn-based and there’s an invisible sort of dice roll happening where you and your enemies will hit or miss attacks based on a few factors such as active or passive skills and potion use. You can take your time while playing this, as enemies will patiently wait for you to act and yes, this also means when you’re in a room packed full of them, you’ll likely be attacked one by one as their turns roll up. 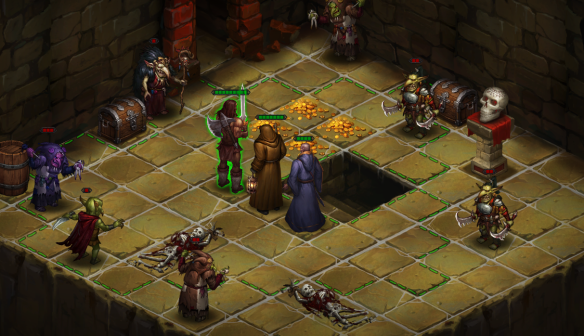 Outnumbered? Well, hopefully you’ll get lucky when that skull on the pedestal is fiddled with. Hopefully (heh)…

This isn’t a RPG where you or your foes are packing hundreds or thousands of hit points and you’ll need to rely on leveling up your party’s skills after each quest as well as crafting gear and equipping it on the appropriate heroes. The game adheres to a strictness regarding gear some may find restricting, as in you can’t make more than one unique item or trade what you’ve crafted to another party member as the game progresses. This forces you to spend that gold wisely and/or invest in a skill that makes a bit of extra gold to drop in addition to scouring every room during a quest in order to find those blue potion bottles needed to upgrade your team’s skills.

Every single party member you recruit or rescue is useful, but you’re limited to who you can take with you to four (or fewer in some cases). Not having a healer’s talents or healing potions is a very bad thing, especially as you only have two slots per character for potions and your healer(s) have limited spell use (which thankfully, increases as you level their skills). You can go back and replay certain maps to earn more gold and blue potions, but be aware that the difficulty ramps up each replay as enemy placement as well as traps will be added to shake things up. The game certainly isn’t easy past the first two or three quests, so expect to be surprised a few times and as noted, needing to work out new tactics as you get closer to your main goal.

Oh, this is really going to get messy if your party’s skills aren’t up to the task at hand.

So, how does it play, you ask? Well, as you’ll see from the gameplay video below (you’re welcome!), there’s a certain rhythm to the game that lends it a nice mix of board and videogame styles:

The game also supports drop-in/drop-out play for up to three players, which combined with its pick up and play nature makes it a pretty decent way to spend an evening (Mountain Dew and assorted salty snacks not included). You can either connect some extra controllers to your PS4 (or Xbox One), or if you don’t have extras, pass that controller to another player when it’s their character’s turn. The game only supports Trophies for the system owner, so if your pals like this a lot, they’ll need to go buy their own copy and play this for their own rewards. Did I mention this is also on the Nintendo Switch? No? Well it is (and in what may be a first, it’s a bit less expensive on Nintendo’s system). It’s too bad Sony let the Vita die an ignoble death as a viable handheld, as this would work REALLY well as a portable game with a few tweaks to allow multiple players to hop in and enjoy the questing.

So yes, Brain Seal has a really cool sleeper here that’s worth a buy in my book. The nicest thing about Dark Quest II is it will have appeal to a wide range of players who want something just about anyone can play without needing to learn a pile of new skills or having to deal with fiddling with customization options galore. It’s also a game where relplaying is just as much fun each time thanks to the random nature of those invisible dice rolls. Sure, success leads to the same outcome each time. But if you’re a fan of the old school stuff, it’ll feel like a new experience every time you fire it up. Recommended (and yes, I think a sequel is in order). Say, would you like another gameplay video? Sure, why not: