Figment ($19.99) is just about as good as it gets on a number of fronts. it’s visually charming yet quite surreal, a bit edgy in tone, perhaps a tad too challenging for younger kids but a total sweet spot game for those who appreciate solid and well designed indies. Did I mention it’s also got a great musical score and songs during some fights? Well, it does (another thing that makes it great stuff).

All its cranky antihero Dusty wants is some ice for his drink, but that rather quickly turns into a quest to rescue a fractured mind in a impressive hybrid of adventure, puzzle, and action game elements liberally sprinkled with wry humor adults will appreciate. There’s also a deeper psychological thing going on that lends the game a Psychonauts-style approach to storytelling as layers are peeled back and you realize the game’s got a serious side that adds to its depth.

Dusty (who looks like George Herriman’s Krazy Kat as re-imagined by Dali with a dash of Tim Burton) is accompanied by a super cheery companion, Piper, a bird-like creature who’s a fountain of peppiness. The banter between the pair is pretty amusing because at first, Dusty is annoyed by her constant reminders of his past deeds and sunny disposition. he doesn’t want to get to anything but his beverage and is mighty tiffed that his relaxing time is turning into a big deal that has him venturing into places where others recall his old good deeds. 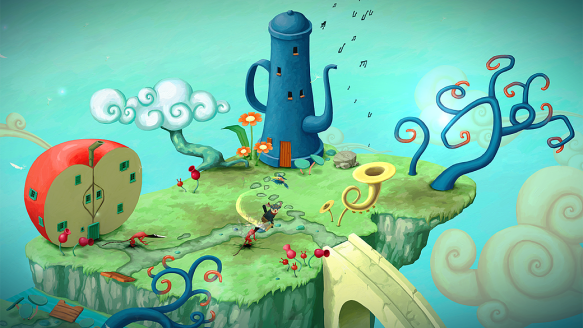 The artistic influences here are brilliant if you know your art history. Even if you don’t, the game is a total visual treat.

Gameplay involves a good deal of puzzle solving where collecting and combining objects to unlock areas and progress to new locations is key. Dusty’s trusty (but not rusty, as it’s wooden) sword gets used in combat and to flip switches, but you’ll need to avoid fighting in cases where enemies either outmatch him or need to be defeated with a bit of thought and planning. Then again, this really isn’t a game where combat is the big star attraction. The game auto saves at certain points so should Dusty fall, he’s back up and ready to go without losing much progress.

While the puzzles are indeed clever (and the puns in the game even more so), there’s a bit of backtracking necessary throughout that may rankle some players who don’t like perambulating about collecting items to use in one spot, then figuring out they need to take that same item and use it elsewhere after trucking halfway across a map. Personally, I didn’t mind this aspect much because the art direction kept offering up plenty of gorgeously weird locales to explore and part of the fun was realizing that elevator platform or battery you left behind would be needed to get to a secret or pathway that led to another story element.

Oh, poop. This maps is a total gas. Ha and ha-ha. Okay, no more stinky jokes from yours truly.

Even though the game can be completed in about five or six hours, there’s a case for taking one’s sweet time and taking in all the sights and sounds over blowing through things in a single sitting. Early on, I did run into one minor glitch where Dusty couldn’t knock on a particular door, but the game ran very smoothly overall. Oh, in case you were wondering, knocking on some doors gets you a few jokes from occupants inside some structures as well as the occasional reward, so make sure to be as nosy as possible until NPC’s start repeating themselves.

One of the more interesting things about the game is it’s probably good for a discussion topic with younger players on the subjects of courage, death and other traumatic bits it brings up without a heavy hand. Not to spoil anything, but the game does open with a an intriguing scene that lets you know it’s more than just your average indie with a superbly whimsical visual style. Anyway, go get this game and see for yourself what’s what. I really hope Bedtime Digital Games has plans for more Dusty and Piper adventures, as they’re certainly a duo that may not be “dynamic”, but well worth seeing again at some point. 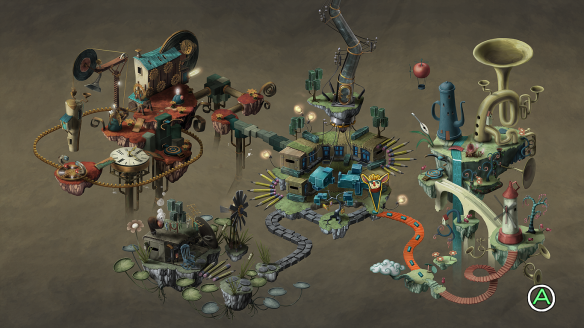 Oh, the places you’ll go in this game. I’d bet Wes Anderson would have a field day making a movie out of this.