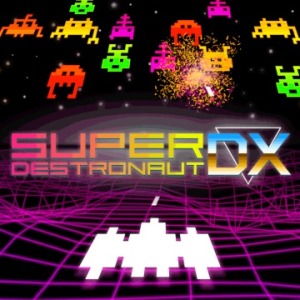 Amusingly enough, in the middle of all the stuff I’m working on, I got distracted by a code for Super Destronaut DX ($4.99, Cross-Buy) and made the “mistake” of downloading and playing it for a bit longer than expected. I use the word “mistake” in the jokiest of manners because the game is not only a ton of fun, it brings back memories of hitting the arcades on the weekends and dropping quarters into way too many now classic shooters and other games. It’s also a Trophy hunter’s dream game, as those rewards drop like rain during a sudden thunderstorm. Even if you’re not into collecting those invisible treats, they appear so frequently that you may think there’s some sort of crazy glitch taking place.

Once again, Ratalaika Games and Petite Games have whipped out a fun retro-inspired blast of greatness that’s seemingly simple on the surface, but packs in the fun for a low enough price point that it’s an instant recommend. As with Inksplosion (also $4.99 and Cross-Buy, so go get this one as well), the game’s not the longest out there on the surface. However, to this former arcade denizen, both of these titles replicate flawlessly the intensity and some of the challenge of those old arcade games (which by the way, were primarily really short experiences that were replayed in order to be mastered). 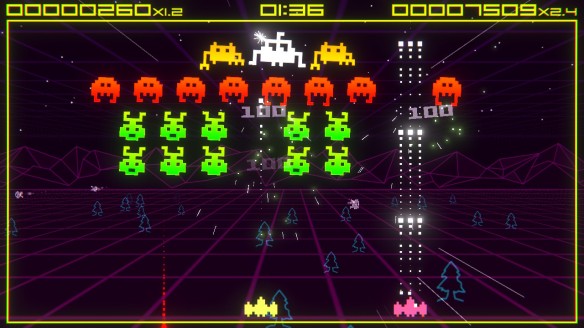 No, they didn’t run out of money making all those aliens to blast and have to use Battlezone assets, for the background. That’s silly.

While it’s not the hardest game out there, Petite has tossed a few visual monkey wrenches into things to keep your eyeballs occupied. Unlike Space Invaders, the background art uses vector graphics that scroll towards the player(s) as those aliens come down from the top of the screen. In addition, alien shots are craftier, there are transparent falling aliens to deal with, and both screen shake and chromatic aberration to deal with. Yes, you’ll want to turn off at least one of these, perhaps both because they game gets truly hectic at times. Oh, and the music is great because it changes as you play and you’ll certainly hear it when you’re playing badly and the soundtrack gets a bit wobbly.

Co-op play is onboard (grab a friend!) and while there’s no online play (go make a new friend offline!), leaderboards track your progress and stack it against every other player on your console of choice. I was a lowly #850 at one point (around 5am or so), but that number has probably dropped significantly since I’ve been away from my PS4 most of today other than recording some stuff for a future article. There are also a bunch of challenges to tackle (you’ll see some of that in the video above), a one-life mode and a Time Trial mode that will test your alien-blasting  accuracy to the max. 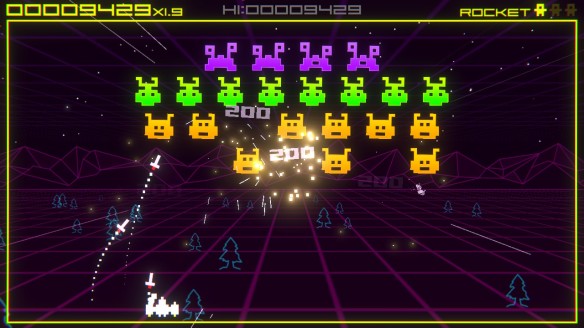 There’s no school like the old school, but  it’s not cool if you skip school to play games all day, kids.  Uh, that’s for us PROFESSIONALS (*snort!*)

So, yes. Games like this and Inksplosion are fantastic and simple on the surface, but highly replayable when you need the quickest of gaming fixes. Don’t be surprised if that five or less minutes you expected turns into a far longer time span, but at least you’ll be rewarded with a big grin and a pile of digital trophies as your feet. Oh, if you do get both games, for the otherwise awesome Inksplosion, turn the ink splotching effects OFF in the options, as this makes the gameplay less of a fake-out on your eyes. Or, heck, leave it on if you like for the added challenge.

Ooh, look! You got one and a half (okay, one and a quarter) reviews for the price of none today! Are you not entertained?!” 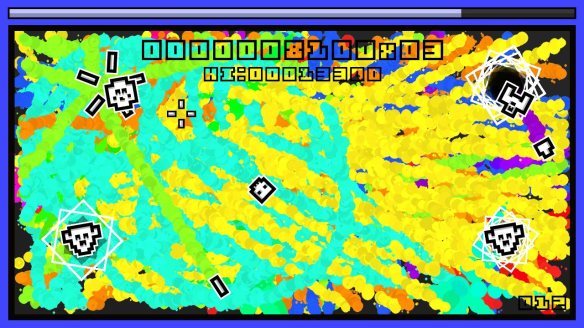 Inksplosion channels Asteroids and Jackson Pollock and believe it or not, really works well. Too bad there’s no “just paint!” mode, though.

Review codes provided by the publisher