Wales Interactive’s Don’t Knock Twice is an “all-in” game if ever there was one. While it can indeed be played without the PSVR headset and during the sunnier daytime hours, the game works best when you wall yourself (Amontillado or not) up all alone in the dark (heh) completely wrapped up in those goofy goggles and a decent set of headphones. Being afraid of the dark and having the additional fear of things that go bump in the night also go a long way in making this mild experience in terror a bit scarier.

On the other hand, if you’re one of those really jaded people who think all horror games need to be gory undead shooting galleries or have stuff jumping out at you every ten seconds, you may not totally grasp what the fuss is all about when the game finally ends somewhere about an hour to hour and a half later. Is the game perfect? Nope. Does it do what it intends to do? Yep. If you let yourself become immersed in the mood it aims for, it’ll get under your skin and make you a bit jumpy for a tiny slice of time. You’re not going to use the (overused) word “innovative” here at all to describe this one. You’re getting a short and creepy horror experience that’s not going to wear out its welcome when all is said and done.

Yours truly had the hilarious (mis)fortune to go half-in (no VR, played first during the daytime) and while the headphones I used were a nice set of open-ear Sennheisers in case someone were to ring the doorbell, I nearly keeled over dead when about two minutes in, a loud banging came from my own front door as the game’s near-incessant and softer tapping started. Yaaaaah! Well, it was only the new postman delivering some games and other stuff I requested to review. The downstairs door to the building was open and he just came on up without ringing the doorbell. Gee, thanks. Mr. Postman.

And I thought physical games were less threatening than digital, ha and ha. Faint, THUD! 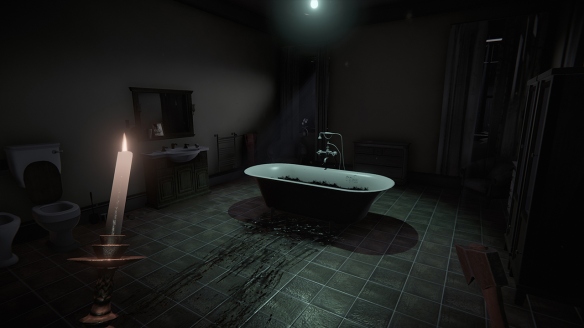 Anyway, what we have here is a fairly straightforward ‘walking simulator’ with light adventure game elements in the forms of text to read, a few puzzles revolving around locked doors that require lighting candles for some and searching around for clues that unlock others. You also have a cellphone that buzzes with text messages at the right moments (usually to freak you out a little), excellently creepy sound effects that also add to the chill factor and super-dark visuals that can be adjusted so you’re not walking into walls constantly. The first time I played, I kept the brightness, gamma and field of view at the default settings and man, was it a somewhat freaky ride. I liked it more than I thought.

The second time, was the “woo-hoo!” moment thanks to lending the game to a friend with a PSVR setup, a significant other with a big fear of scary stuff willing to try the game out and a very skittish cat in the house. I decided to stick around, make dinner for everyone (just some pasta with a homemade sauce) and see what happened. Between the cursing and occasional screeches followed by a loud scream and the cat running out of the room after power-sliding past me (in the way freaked out kitties do, nails on the floor and all) I’d say that part of the evening was a success. It turned out that the cat decided to brush past someone’s feet during a creepy moment and the ensuing scream sent that cat skating out of the room. Well, the pasta sauce I made went over well, too. I tried out the VR version for about 15 minutes (about the most I can stand in a row for VR games) and found it creepier but for me, the motion sickness I get keeps me away from the technology (sorry, VR devs!)

The game looks fine for what it is, but you need to accept the lack of voice acting and let the aural experience reel you in. It’s kind of a tricky rope to walk here, as some games with narration and/or people talking to themselves for the sake of exposition can come off as contrived. In reality, I think some going into this (especially in VR) will drop themselves into the shoes of that protagonist and speak or scream at their leisure. I know I let out the occasional gasp and yep, talked myself into creeping into a particularly unsettling spot. Sure, you can run through most of the game and be unafraid just like some who hit carnival haunted house rides totally unfazed. But let a little Baba Yaga in into the house and once you’re under that spell, you’re likely to be glued to your seat from start to finish.

While it’s got its flaws, Don’t Knock Twice does what it does and gets out (double heh) once its time is up. You can’t ask for more than that unless you really want an evil spirit hanging around rattling your cage while you’re trying to sleep. Hey, be careful what you wish for, folks.