Short yet very replayble and guaranteed to make you think a bit about life on a few levels, George Batchelor’s brilliant Far From Noise is a compact indie game well worth a buy. If you love your games way on the weird side, this meaningful meditation will capture your attention and keep you on the edge of your seat. Given that in the game you’re trapped in a car perched precariously on the edge of a cliff and have nothing to do but wait as a bit of nature pops in for a visit, it’s one of those experiences where revealing too much spoils the fun.

Let’s just say this visually simple and mostly text-driven affair makes for a great bedtime tale where you encounter a talking deer that more or less helps you see things from a few perspectives. A bit of philosophy, some star gazing, a few guests and even the weather are your main companions as your character addresses his or her fears during a long night where it seems anything can happen. While seemingly simplistic, the visual style hides some nice effects and excellent use of controller vibration and the PS4’s color bar (which emulates the game’s day to night to day cycle as time passes).

Even though you’re stuck in that rusted, failing ride about to fall to your doom (maybe), there’s a rhythm to the game’s pacing that’s perfect. As the fateful meeting occurs, some scenes are intentionally drawn out with longer periods between responses that allow the camera to move or accent other visual cues to occur that compliment the proceedings.  There’s no “right” or “wrong” way to have dialog here. Your choices determine a few outcomes from what sort of wildlife you’ll meet to what kind of weather will pop in at certain points. There are a few mandatory sequences in each playthrough that act as bridge points to move the night along. But it’s in the replays where you’ll see how choosing your words comes into play.

Granted, there are only so many choices to make before you think you’re out of them. but the game does offer up a few chances to expand on certain moments that can affect a few variables as your conversation continues. Still, given that the handful of Trophies will only be seen by those who decide to go through the game at least three or four times, this is a case of really getting the most out of your gaming dollar and sinking into a short but sweet dreamlike state where you just might find yourself thinking about stuff you don’t normally think about in your escapist entertainment. Oh, and the music and sound design are impeccable as well. So go slap on a set of decent headphones and you can practically feel yourself on that cliff edge.

Yes, it’s a niche game for those of us who like them, but it’s one that’s a purely well made treasure that’s also one of the best games of the year (short form, division, if one were to create such a thing). 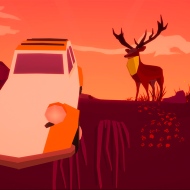 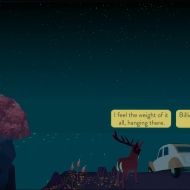