Fans of Mature-rated fan service galore will absolutely be in deep grin mode with Dungeon Travelers 2: The Royal Library & the Monster Seal, which also happens to be an excellently designed and lengthy dungeon crawler. for the record, developer Aquaplus doesn’t reinvent the wheel at all here. But the gameplay is solid and challenging enough that fans of old-school Wizardry games and more recent riffs on it (Etrian Odyssey, Elminage Original) will find the game an excellent time eater.

In addition to some pleasing visuals, smooth dungeon movement and plenty of quick turn-based random battles against enemies that aren’t pure pushovers keep things rolling merrily along. The rather heavy fan service (in the form of plenty of under-dressed character art ranging from mild to somewhat creepy) will indeed be a sticking point for prudes and anyone else determined to dislike the game for the one thing it’ll sell for to some players who like this sort of content. Interestingly enough, the game somehow balances that out thematically by adding a religious subplot and characters to the mix. It doesn’t make up for everything, but it’s amusing, surprisingly well written (for a game such as this) and intelligently implemented.

You play as Fried, a new hire in the titular Royal Library as he sets out to set things right in the kingdom of Romulea after monsters start acting up a wee bit too much. Unlike in most other RPGs, Fried isn’t a skilled or even novice beast battler. He wields a monster-sealing spell book and needs a growing assortment of ladies from the Academy (and other locations) to do the fighting for him. Initially, two of his friends are his sole companions for the first slice of the game as it teaches you the basics while also not hand-holding you when it comes to difficulty early on.

Those with experience playing western dungeon crawlers and/or the aforementioned games will know that venturing too deep into the first dungeon is a bad idea because you’re under-leveled and haven’t enough healing supplies. That first smaller dungeon and (in fact, every area in the game) will require repeated trips back to the Academy to heal, frequent saving and proper skill point distribution for maximum effect. For every nine monsters you dispatch, Fried can create a different spell book each gal can equip that boosts or lessens certain skills. Boss monsters get transformed into books Fried can equip that add different effects to the party that range from less encounters, increased critical hits, decreased negative status effect time and more.

The story unfolds through a series of event and dialog scenes letting you know early on in the tutorial dungeon via the two pair of panties your first two party members are wearing staring you in the face (after a cave-in tumbles them to the ground) that this isn’t a kid’s game at all. DT2 isn’t shy about displaying its saucy shots at certain points and there are more than enough nicely rendered eye-popping images to fill an art gallery. Of course, you get two of those galleries along with event and sub-event viewers as unlockable bonuses on the title screen. You can very safely say that DT2 loves to bend itself over backwards (and forwards!) to show you its best sides whenever possible. 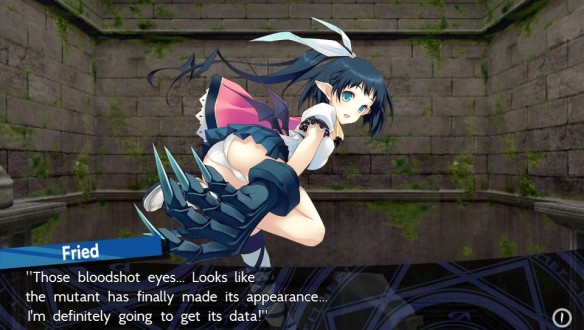 That said, some fans are “outraged” (*yawn*) that a mere four images were altered for the English language version. However, it’s not as if the edits were SO awful that they demanded any anger at all. The game is still fairly risque in terms of what you get to see, but you can fast-forward through cut scenes if you’re not up to those gratuitous images tickling your eyeballs. It’s important to remember these minor edits helped get this released in America with the bulk of the artwork intact. For those new to these sorts of games, what’s here is racy to questionable enough to raise eyebrows (and anything else you want hoisted if you’re into that sort of thing). Like it or not, “moral” standards here in America are much different than in Japan in regards to what sort off stuff can slip into a videogame and allow it to keep a well-earned Mature rating from tripping into Adults Only territory. 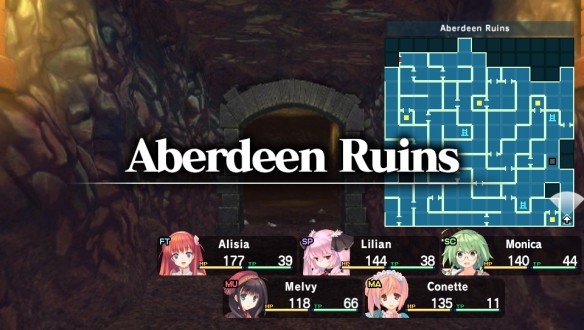 That said, there are no actual “sex” scenes and humor is used quite well during most of the half-peeled character content. The overall tone is more wacky fantasy RPG sex comedy and nowhere near “pornographic” unless your brain reads too much into some imagery and dialog. If suggestive poses, scads of goofball dialog and not so veiled to “okay, that’s a wee bit much” visual imagery gets your brain boiling, you probably shouldn’t be playing this game. Meanwhile, back at the ranch, difficulty ranges from tolerable to highly challenging especially if you get too cocky and roam into trouble. The game gets geometrically harder in each new area (or floor in the multi-level dungeons) and you’re warned right before you reach a boss encounter or certain areas where a tough battle awaits.

it’s not just tough enemies that will do you in if you delve too deeply into the dungeons. Grinding for levels is not only key here, but absolutely necessary. Player impatience is the bigger party killer, as even the initial enemies all pack a wallop and will have your party for lunch if you’re just jamming away on the attack command and not paying attention to your party’s needs. Minding enemy turn order, using buffs, debuffs, magic and skills properly will keep your team alive, as will having the best gear you can find (and later, enhance).

While most battles are random, the game also has preset spots where enemies will jump you when a door is opened. You’ll need to get used to these preset encounters because they make for good farming locations for experience and random drops. The game also has some treasure chests that refill their contents, allowing you to make a nice chunk of money throughout the game from selling off collected gear.

Given that you’ll find plenty of healing items as monster drops, quest rewards and from chests, it may not seem as if the Academy shop is all that important outside of identifying items and perhaps topping up certain useful items on occasion. However, you’ll end up needing a hefty amount of gold in your coffers because of the weapon crafting that unlocks a few hours in. Beefing up your team’s gear is another key to success. Having weapons and gear that make you almost to completely immune to status and elemental effects is a lifesaver when you run into enemy groups that use multiple effects on your team.

During play, extended, comical tutorial cut scenes pop up in the dungeons that explain certain game systems and how to effectively use them. In addition to these, there’s a Maid-Sensei back at the Academy that offers her own lessons on important gameplay elements. While you’ll figure out some things by reading the manual and/or via experimentation, these bits are generally hilarious and poke fun at things quite well. 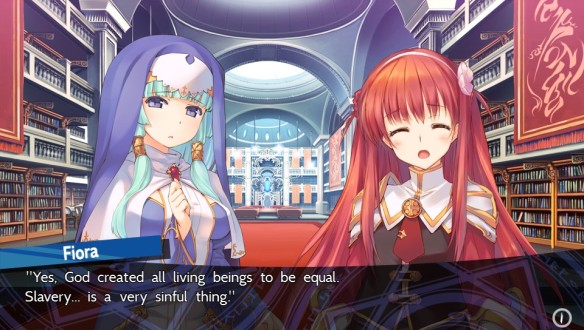 Even more of a key to victory (and less death in the dungeons) is the game’s class change system. Your party can switch classes at level 10 and again at level 30. The girls each keep their previous class skills and will learn some really powerful ones no matter which path you choose for them. If you don’t like your new class or want to try a new one, you can reset a character’s level down and pick again. The drawback here is that character will need to level back up to the rest of the party. Additionally, lowering a gal’s level may give her a few less skill points to spend. That said, it’s important to have a nice range of different classes to choose from as some areas mid to late game feature powerful enemies that can decimate an otherwise well-prepared party.

DT2 also has a Quest Desk where you can tackle a ton of not-so optional tasks of the usual “collect X number of item” and “kill x number of monsters” variety. Ranking up here unlocks a bunch of dungeon extensions, new areas and some other fun stuff. You don’t have to do any of this stuff if you don’t want to. But the meat of a good dungeon crawler is unlocking and exploring new areas. Thankfully, the stuff you uncover here is well worth all that hunting and gathering. While the first dungeon is a simple one, one past that point both the main game and extra dungeons are littered with traps, anti-magic zones, dark zones, hidden switches and light to heavy puzzle elements. You need to learn quickly how to deal with multiple threats like status effects hitting you as you walk into a room, making sure to heal up before taking another step lest you run into some enemies who may hit you with more effects that could wipe your team out.

If the 80+ hours of gameplay, super-tough dungeons and 16 different pretty party members aren’t enough for you, DT2 also offers up some paid DLC that features a whopping twenty more girls to use as party members. This batch of characters comes from the never-released in North America PSP game To Heart 2: Dungeon Travelers, but none of these gals have story sequences. All start at level 1 with one of their skills getting a point plus you get three points to spend how you wish. $9.99 gets you those ladies plus two cool equips. One boosts experience gained and the other nets you more gear drops post-battle. If you’re really into the game and its grindy greatness, you’ll probably be down with dropping that tenner in a To Heart-beat.

Overall, Dungeon Travelers 2: The Royal Library & the Monster Seal is one of the nicer surprises of the year not only as a Vita game, but a solid dungeon crawler as it gets. Yes, it’s not for everyone and nope, it’s NOT for the kids at all. But if you love a good, long and hard RPG and don’t mind the fan service and consistently humorous jabs the game takes at itself and the JRPG genre, it’s going to be a treasure you’ll be spending a ton of time uncovering.