GameCrafter and GameTomo‘s formerly PC and PS4-only indie Project Nimbus blasts onto Nintendo Switch with a few tweaks as Project Nimbus: Complete Edition ($19.99) and it’s a near total blast for mecha fans who crave dynamic action and some pretty cool-looking well-armed and armored machines to zip around in. The game looks and sounds great, runs quite smoothly and has three distinct play modes that add to the experience and make it infinitely replayable. While it’s not a flawless game, it’s definitely well made and entertaining enough that it’s going to keep those hooked into it busy bees whenever they need that mecha fix they crave.

Campaign mode is a four-chapter story arc that’s pretty much a Mecha 101 course packed with a ‘we’re making war to have peace’ political narrative (there’s an AI named after a certain former US President!) told though audio logs and in-game engine CG sequences. It does what it does well enough and keeps interest high throughout the campaign’s twists and turns. Gameplay here has you piloting a few different Battle Frames as the story progresses and sometimes your loadouts will be limited for the plot’s sake, while other times you’ll have access to a number of pretty tricked out BF’s to deal with the more impossible odds. There’s also a first-person option (in campaign mode only) if you’re wanting to get a cockpit view at the expense of some tactical advantage. I don’t own a Labo VR kit, so I can’t comment on whether the game supports Nintendo’s cheaper DIY Switch VR solution, but if there’s an update for this, I’m sure it’ll get love where it’s needed.

Some very bad children need to be taught a lesson. Let’s start by taking them to school…

In terms of controls, they’ll be initially daunting to some players, but once you do a few missions and adjust to the on-the-fly weapons switching and learn when to manually reload your equips, the game clicks into high gear. Expect a few types of automatic rifles, shotguns, missiles and even swords, the latter which are great to see, but may be underutilized by those who prefer exploiting purely ranged combat options. The three difficulty levels do make a huge difference, as your reaction speed and aim need to be on point in the harder modes. The more casual mode is great for learning the ropes and blazing through most missions with little to somewhat fierce opposition and yes, you can change that difficulty before any mission in any game mode.

Survival mode is as you’d expect – pick a BF from 15 available types (lovely!), pick a map from the six main areas in the game and play until you’re blasted out of the sky by the AI. It’s great fun, but yes,  for some players expecting more it would have been nice to see a co-op or multiplayer mode included. On the other hand, given that this is an Unreal 4-powered game running at a pretty respectable frame rate on the Switch, I don’t even want to know what a split-screen or online mode would demand that Tegra X1-based chip handle for a decent experience. Playing in docked and then handheld mode reveals that the game looks great either way, but yes, it’s not as sharp as the PC or PS4 versions. That said, if you’ve played neither of the other versions of this game and only own a Switch, you’re being more than well-served here. 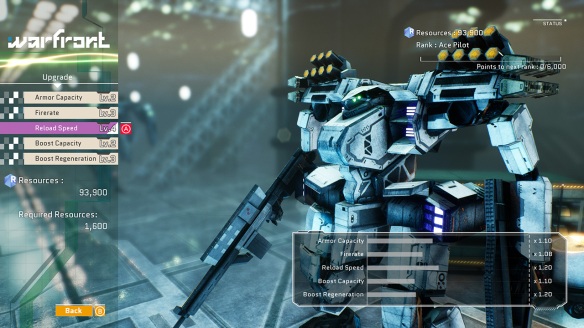 Oh, yeah – Warfront is where its at if you like it grindy and rewarding. I do, so sign me up!

Warfront mode is, as I predicted in my earlier hands-on time, where the bulk of the fun can be had if you’re really into what’s here. You pick a side to fight as and choose a Battle Frame from an increasingly more powerful garage of them (which unlocks as your pilot gains levels), upgrade it using earned resources and have at it in six different scenarios from straight battles, boss fights and other events set in a few randomly-generated level variants. There’s a nicely grindy nature to Warfront that’s easy to over-judge because of the repetition, but it’s more than acceptable for my own tastes, as it’s also a case where players can learn the ins and outs of each BF as they blast their way through missions on their difficulty of choice. You not only gain resources for kills made, but for remaining AI teammates, whether that base you’re defending is damaged, or a few other mission variables get accomplished (or not).

You’re encouraged to try a few different tactics or a different BF if you’re having a hard time with a mission, and hilariously enough, the two starter BF’s (one for each side) are very and comically woefully under-powered for what they need to do.  Still, that CFN model M1 Guardian with its low power 20mm machine gun and Micromissiles makes for a much better rig to fly than that UCN S-20 Shika, which has no missiles at all and that same weak 20mm gun. Let me tell you, spending about 26 minutes flying around in that dinky metal flea trying to shoot down a Judgment (a huge unlockable BF) after dealing with a few waves of enemies had me dying laughing because I actually did it without getting blown to bits after that huge ship wiped out the rest of my AI assistance within a few minutes of appearing in the combat area. The great thing is your overall earned experience carries over into whichever of the two sides you choose, so you’ll automatically unlock the other side’s BF’s, but need to level them up separately using earned resources. 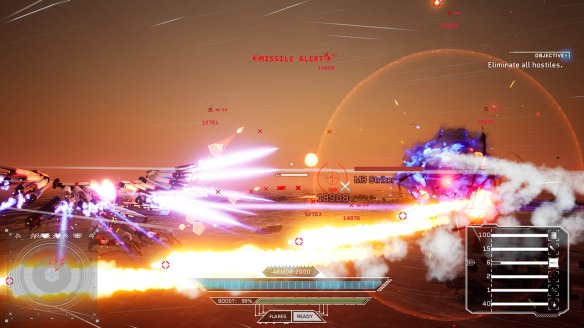 It looks busy because it is. But you’ll get used to it, trust me.

As noted, presentation is quite solid overall, but I did run into two instances of enemies getting stuck in odd spots, forcing those missions to go on for longer than they needed to. In both cases, I was able to locate and take down both enemies, but it was a bit trickier in one map because it seemed the AI was caught in a loop where the enemy could only be hit as it descended past a certain invisible point where it could be targeted. Not a game killer, mind you – just a loud burp interrupting my mecha reverie. That’s the only real negative I came across in the game outside some long load times between areas (which isn’t that big of a deal in my book) and a single crash that couldn’t be replicated when restarting the mission it happened on. If there’s a sequel in the works, I’m all in, provided it’s packing in a few more environment types, ground-based combat and maybe a Battle Frame editor so players can get more of an Armored Core feel from the experience. as usual, we shall see, but in the mean time, go grab this and take to the less than friendly skies as you do your best on a few battlefronts.