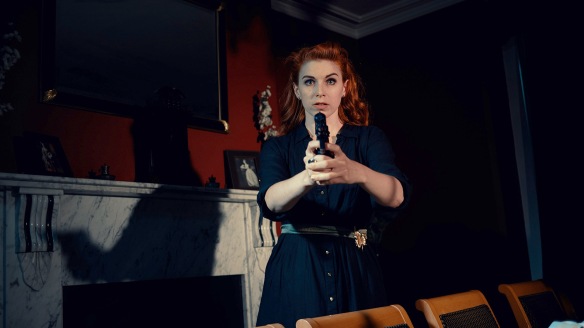 That’s the lovely and quirky Violet (Aislinn De’Ath). Is she the killer? Maybe? I dunno, but she’s certainly looking like she’s about to be one in this screenshot. 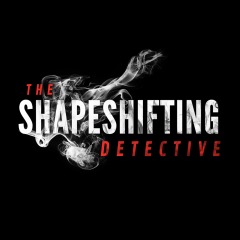 I consider publisher Wales Interactive as the new gatekeepers of the FMV (Full-Motion Video) flame these days simply because they’ve put out a number of memorable modern titles that bring this style of game to players in full HD glory. Yes, the Digital Pictures comeback (Night Trap, Double Switch) is a good thing for those who recall the 1990’s fondly through those older games. But Wales’ modern FMV output stands out with better production values, less gimmicky casting and some decent mature story lines as hooks that make them well worth a look.

Granted, there’s a fair bit of comic relief to be found in D’Avekki Studios The Shapeshifting Detective ($12.99), but it’s a case where if you’re into what’s on display, you’re chuckling with the game rather than at it. A murder most foul has been committed in the sleepy town of August and it’s up to you to help solve the crime. Well, it’s not you, but a character named Sam (which isn’t really his name) who can transform into other characters who’s tasked with discovering the culprit. The game works well on a few levels where thinking outside the box can net some interesting results that will change each time you play based on how you handle those transformations and who you interact with. 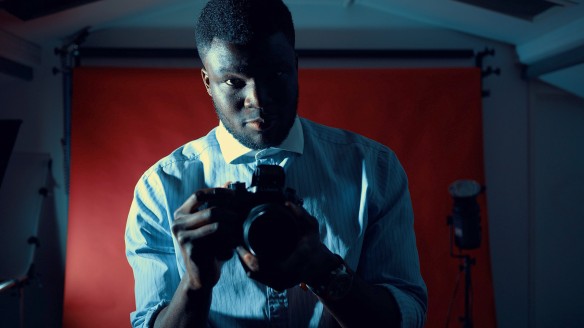 Esmonde Cole is Zak, handsome man with a camera who knows how to use it to get what he wants. You’ll see he makes quite the suspect as well. Killer? Oh, we shall see…

Your initial suspects are three tarot card readers holed up in a fancy inn run by a strange woman who’s taking pills that cause partial memory loss. The list grows as the game progresses (a shady photog, the victim’s boyfriend, a potential victim and a few others you meet) and you’ll discover less than perfect alibis all around as well as a few revelations that both help and hinder your efforts.  The intentionally loopy nature of the gameplay will keep you guessing for a bit, but as you start piecing things together, you’ll be dialed in for the long haul each session. 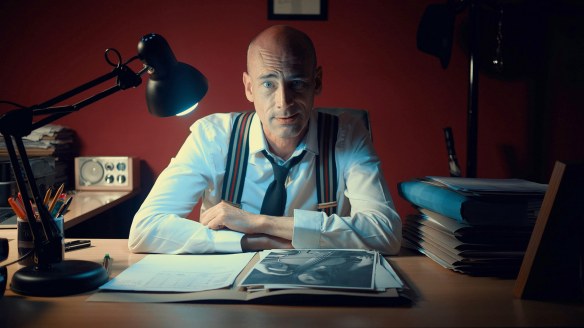 That’s Chief DuPont (Rupert Booth), the guy who hires you, so he’s NOT a suspect… or is he? Well, that’s what you’ll be needing to find out now, isn’t it?

Unlike a standard point and click adventure, Sam’s movement through the game is more a sort of trance-like drifting as you choose which person to shift into and experience the results. Your interactions initially seem limited, but once you discover the game’s flow and start experimenting with the shifting, the fun really begins. Gameplay is split into “hours” where Sam needs to swap back and forth between a growing list of characters interacting with them until he’s exhausted a chapter’s conversation and/or interaction options. You’ll know it’s time to move to the next hour when characters stop talking to you or you simply decide you have the evidence you need to progress.  You get a second chance to poke around before a new hour begins, an there’s a recap feature that lets you keep track of where your efforts have gone in terms of who’s been spoken to and who needs to be spoken to to advance.

The thing is, the game randomizes the suspect each time you play so you’ll be wanting to dive right back in to have another go if the first time hooked you in. This means you’ll not want to fall for the cute gals or handsome guys here at all if you’re prone to that sort of thing because there’s a very good chance that they may be the murderer. Still, it’s to the game’s credit that its cast is mostly made up of some pretty attractive people who do decent jobs at portraying their parts. Another great thing is how far the game lets you take certain segments even allowing for a bit of seduction that’s kind of creepy in a way as it’s Sam in control and things can get really weird if you let them. That said, the game’s Teen rating keeps things from getting too off the rails, but I wouldn’t recommend this to younger kids unless you’re an adult willing to explain some mild birds ‘n bees stuff.

“Went to a fortune teller, had my fortune read…” That’s Anarosa De Eizaguirre Butler  as Bronwyn, by the way. Killer? maybe, but you’ll probably not want her to be.

The ability to eliminate questions is another solid thing here that also has its drawbacks. While it does help to narrow down potential suspects or net you extra time with some characters, you just may shut off a suspect too early and end up with an ending you weren’t expecting. Granted, in this game this isn’t a negative at all – it just get you to try again and mess with those Q & A sessions slightly to very differently. One plot element that’s incredibly intriguing is the three tarot card readers are in pursuit of a demon of some sort that’s hunting multiple victims, something that’s ripe for exploration in a future standalone game should D’Avekki want to deeper dive that way.

While there’s at least one random technical issue where the game will wig out and do some Max Headroom-style audio and video glitching, this actually works an odd feature that sort of gives an idea of Sam’s hold on his identity being a bit loose. If you play your cards wrong, Sam can give himself away as a shapeshifter and fall prey to all sorts of questioning by certain characters more in touch with the spirit world. Again, that replay value here will keep you coming back to this one for a bit, so the game comes highly recommended if you’re a fan of games that use multiple paths and endings as a means of keeping your interest high.

In short, this one’s worth a buy, hands down. For the price of a movie ticket (well, here in NYC), you’re getting an interactive movie with a compelling narrative, multiple paths and endings, all served up in fine HD form. You’re also getting a very weird radio station in-game that plays some offbeat tales read with relish by a few fine voice actors. The option to turn the station off is here, but I say leave it running because those tiny tales of terror add another layer of weirdness to the proceedings that assist in making the atmosphere all the more bizarre. 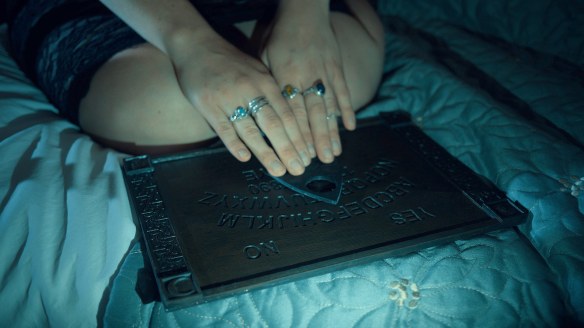 Those Noyce hands and knees belong to Lexie (Olivia Noyce), one of the tarot readers who, yes, is also a suspect. You kind of don’t want her to be the killer, but it’s kind of not your call.