Uh, mommy? Holy hell, The Conjuring House sure is scary when it needs to be (which is often). Developer RYM Games has a an almost killer game here that despite a few technical flaws (which are currently being addressed via patches that will hopefully improve the overall experience) is one near-total freakout of a game. Things get off to a scary start and the tension builds as the game follows the tried and true “Old Dark House filled with dreadful evil”  formula with some pretty hefty psychological horror and jump scares. Unlike some more popular horror titles, you’re unarmed and have to try and avoid or run from enemies whenever possible, the game has intentionally distant save points and yes, this leads to a few too many deaths whether or not you’re careless. On the other hand, when when things click, you’re playing half under whatever you were sitting on when you started with one eye opened because the other has shut itself closed.

Nevertheless, in its current form, some elements of the game aren’t quite as solid as they should be. Changing the default video settings immediately makes the game too dark to see and that default setting uses a post-processing effect that seems to add too much blur to the movement. Some well-done but lengthy cutscenes do a great job of storytelling, but can’t be skipped at all, so if you die  before one, you’ll need to watch the whole thing all over again. Add in those long treks and/or backtracking between those save points plus a single save slot and you get a recipe for frustration as well as fear of playing for some of the wrong reasons. 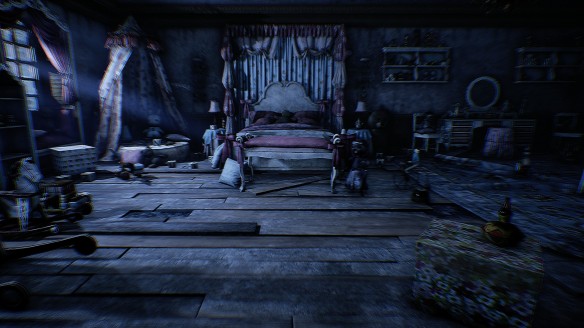 Your brain will look and feel like this decrepit room right from the moment you gain control of your hapless non-hero.

That said, I actually see where RYM is going with this, so I’ll recommend it with the hope it can be polished up to a shinier (yet still depressingly gloomy) finish. They wanted to make a story-driven, fear-filled game where players were trying to stay alive as they solved puzzles and got deeper into the creepy cultist-packed mansion (as well as some other areas). Yes, it succeeds on that front (and how!). But players new to this sort of game will need to know it doesn’t even try to hold your hand or guide you as to where to go (although this makes it all the more frightening when you get deeper in and are too scared to push on). Granted, that’s excellent for players that like to play mental chess with games like these, but not for the “checkers” crowd or horror fans that likes more direction or at the very least, a fairer chance of survival.  There’s been one patch released already that’s addressed a number of issues, but there are still more problems to be tackled (hopefully sooner than too late for the game to get a more appreciative audience).

My suggestions are for RYM to add a save anywhere option and/or add checkpoints and auto saving whenever a door is opened, fix the lighting issue and post-processing effects, and maybe add an optional hint system for those who get stuck or lost easily. They’ve got a winning formula with the creepy visuals and frantic character animations in those cutscenes, but everything needs to really come together if this one’s going to be a better true horror classic. I’ll check back in once that new patch is up and running and post more impressions then or a more concise review (with an actual score) if the game is working as it needs to.