Like your games of the semi-arcade space shooter variety with assorted adventure elements mixed in to shake things up? Want something that’s pretty cool but tough to play for a nice price? Well, step right up and snag a copy of Defenders of Ekron, currently available on PS4 and PC.

If you’re one of those gamers who won’t keep silent about some games being “too casual” these days, get ready for one that’s ready to get you jumping up and down on your controller if you’re that type of person. Well, PS4 controllers aren’t cheap, so maybe get one of these and keep it handy. Granted, the challenge is a welcome one overall if you’re willing to jump in and explore. 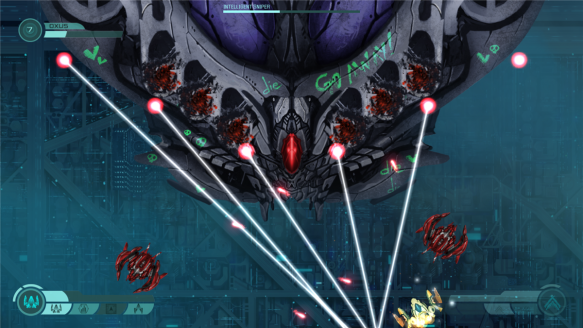 Mixing single player twin stick “bullet hell” shooting with a top-down view, gear upgrades and a few different styles of play is what keeps the game fresh. Chilean developer In Vitro Games has cooked up a pretty cool sleeper that’s well worth the price point.  Somewhat like DOGOS and to some extent, the top-down levels in Thunder Force II, the ability to explore areas at will makes for a nice change of pace. Add in puzzle-themed missions, some great boss battles and a ton of other surprises and you get a game that’s pretty deep overall.

Then again, in this day and age of too many games being over too quickly and/or gamers being dissatisfied with one-note gameplay, what’s here is quite amazing on a few levels. You get quasi-dungeon crawling adventure/exploration, areas where only certain offensive or defensive gear can be used, puzzle-based sections and more. The game mixes it up enough that it might seem daunting to those expecting the usual retro “shmup” of the week (although there’s nothing wrong at all about a good shmup/adventure/puzzle hybrid at all). That top-down perspective is initially going to make some players think this might indeed be a generic shooter, but you have to get very quickly that you’re a guy in a power-packed death machine as seen from above and have fun with how it plays out. 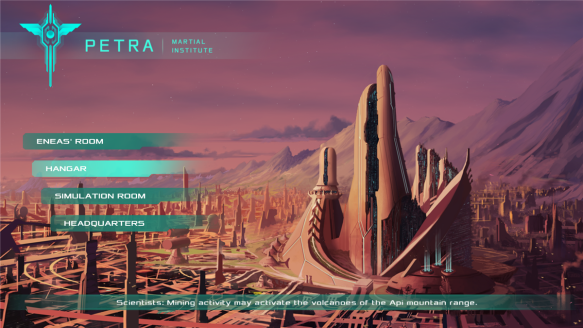 You’re playing as Eneas, pilot of a highly advanced mech called an Anakim which is part of a small team sent out to stave off an interplanetary war before things get out of control. While the overall storytelling is fine and there are a few nifty twists and turns before it’s all wrapped up, you’re not getting a full-fledged “epic” (although you can see a ton of work went into the lore). Then again, I was reminded at one point of the somewhat epic opening movie to Xyanide, where you get an almost eight minute CG intro and a game that while quite good, never really built up past that wild, lengthy introduction. This game stretches its story out and while not exactly novel-worthy, might make for an interesting sequel with perhaps co-op or online modes as options.

The assorted level designs and different tutorials allow you to mess around with weapons and upgrades, a good thing because you’ll be needing to concentrate on not dying (much) once you’re in the soup. It’s tricky but thrilling to figure out some of the puzzle-type missions, although one could say the game has more than you might want. Then again, that aforementioned variety keeps you on your toes and new gear is doled out carefully enough that you’re not overwhelmed with choices. 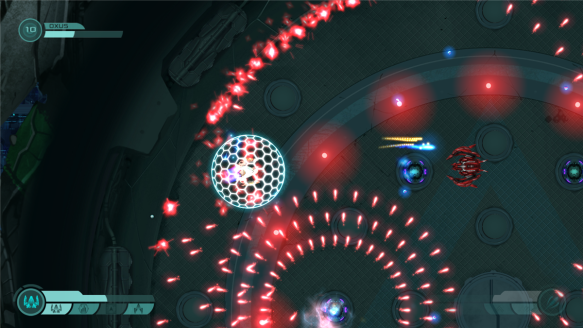 As proper energy management is key to success here, merely jamming on the weapon buttons will get you blasted into scrap in no time flat. Learning when to shoot, use your shield, or just get the heck out of Dodge is fun for the most part. There’s also that somewhat sweet spot where you’re dying less and making more progress and the game gets less frustrating yet still retains some unpredictability. I guess someone out there will blow through this in a speedrun of some sort, but that won’t be my well-aged self on that ride to hell.

Simple controls, a clean visual style and mostly decent score work well together, although some of the busier backdrops can be a bit distracting once things get hectic. When I first heard of this game, I was surprised it wasn’t getting a PlayStation Vita release as well. Then I played it and realized as much as I love my Vita, this is a game I wouldn’t play on a smaller screen because it just feels right in a larger format. That and yeah, I’d probably “accidentally” toss the thing at a wall during some of the tenser missions. Anyway, replay value is high and hardcore genre fans with open minds willing to spend $15 should get a kick out of what’s here.

While not “perfect”, it’s clear that In Vitro wants Defenders of Ekron to be a showpiece of sorts for their talents. Hopefully, we’ll see more from this team sooner or later, as the games market tends to be fickle and fans forgetful to a fault when smaller, well-made indies get lost in the swarm of too many me-too AAA releases that aren’t worth half of what this game costs to pick up.