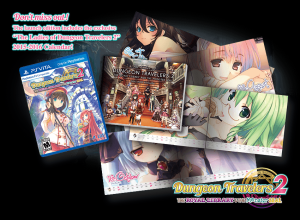 Let’s get this out of the way first: Atlus’ upcoming PS Vita JRPG Dungeon Travelers 2: The Royal Library & the Monster Seal is NOT for kids. Period, end of story. Developer Aquaplus’ first-person dungeon crawler may have that cute anime look to it, but the mash up of bishojo game and classic (albeit simplified) Wizardry gameplay seems to have twisted many gamers into human pretzels as they either express offense at the content or defense at wanting to buy the game.

The thing is, half-naked artwork and cheesy dialog aside… the game isn’t “porn” by any stretch of the imagination unless it’s an overactive one at work. Some of the furor about the game comes from the presentation of its female characters in assorted states of undress, some silly cut scenes that let players linger as long as they want to on images and oddly enough, the fact that the ESRB determined a mere four of these images to be worthy of getting edited from the final North American product. While some journalists are doing the “A-ha!” dance around those unseen images (you can look them up online if you wish), they’re also busy unintentionally or intentionally insulting not only Atlus’ decision to publish the game, but people who may want to buy the game in the process.

As with other Mature-rated RPG’s and other niche titles with “offensive” near nudity that have been localized (such as Demon Gaze, Monster Monpiece, Valhalla Knights III, Conception 2, Dragon’s Crown), the rush to condemn is so fervent that it makes certain publishers look “guilty” when in fact, they’re dipping a toe in this particular water thanks to fans. It’s also an interesting business experiment to see if certain types of Japanese games can find an audience and not at all an intent to corrupt anyone not of age who buys every cute-looking anime/manga RPG as they drop.

By calling out Atlus and other publishers for bringing over more adult-themed games (that, yes don’t look too adult at first glance), there’s such a huge ignorance of game history that it’s more offensive to see that lack of research making for some clickbait-y and mean spirited posts by people who’d know better if they spent about a minute doing a simple search. DT2 is in fact, influenced by an actual hentai RPG series, Dragon Knight, which had four games made for Japanese PC’s and consoles from 1989-1995. One also needs to understand that the presentation of sexual themes in some parts of Japanese culture and entertainment is going to seem a lot more exploitative (although here in America, we’re not exactly a nation of prudes in many aspects).

But enough of that noise. “How’s the game itself!” you’re dying to know, right? Pretty darn good, as far as the demo goes. You play as Fried Einhard, an honor student who gets shifted from his dull school library job into a dungeon-diving adventurer. He’s not a fighter at all, so Fried needs to get help from the stronger female students in order to successfully navigate (and survive) a series of increasingly tough dungeons. Yes, the gals are all stereotypically clueless and naive, but they’re pretty effective in combat and the game allows you to mess with them in terms of how you tweak their skills as things progress.

As noted above, the gameplay is solid and very much like Wizardry (or Etrian Odyssey if you don’t know that older series well or at all) but with an auto-mapping system and speedier movement through the dungeons. In fact, with the game movement and battle speed cranked all the way up, things can move too fast. Death comes quickly if you’re careless or overeager in your exploration efforts. The best way for beginners to play the demo is to hightail it to the exit and the school’s safe zone, chat up characters to get info and story bits and head back to the danger zone. Taking it slow and taking on a handful of battles before zipping back to school for that auto-healing will keep your party alive, leveling up and making it through with relative ease.

The game is only difficult when you run into multiple enemies (either half-dressed women or goofy looking fruit) that cast status effects or slap you with powerful spells and physical attacks before you can get better gear. But careful play and saving frequently make the demo a lot less painful, One thing the game also does to make things easier is to have at least one treasure chest per dungeon that constantly refills with random gear. If you’re in need of money (the shop is fairly expensive right from the get-go), all you need to do is find that chest, grab the item inside, make your way out of the dungeon to identify and equip or sell what you’ve picked up. Combined with leveling from killing enemies (who also drop random items), my party was at the maximum level the demo allowed before I completed the first dungeon.

It may seem cheap to “grind” in this manner to some gamers. But those folks don’t know one of the basic rules of Dungeon Crawling 101: “When in doubt, grind a few levels!” Games like this don’t reward players for being masochists and they don’t penalize them for having the foresight to realize that beating enemies before they beat you makes sense. That and the game tends to slap you with random battles where you’re outnumbered and outclassed on a regular basis. Did I mention that the bosses in the demo are somewhat tough and cheap ladies? Yeah, they are. The great thing about the demo is you can save your progress and transfer that over to the main game when it ships out August 18, 2015.

As for any future “controversy” this game causes, as with the other titles mentioned above it’ll all disappear sooner than some want it to. Atlus and other publishers are trying to fill a tiny niche with games like these and they’re clearly not for everyone. That’s what ratings are for, folks. Back with a full review around the release date once the embargo lifts.