I remember walking into an arcade back around 1990 or 1991 and seeing a new machine added to the site’s already impressive selection. It was a large sit-down G-LOC Air Battle cabinet that had a line of about 10 or so people waiting to play. That machine looked like a super-deformed airplane and had speakers on the seat that faced forward, which helped mostly shut out sounds from the arcade save for music and sounds inside the cabinet.

Most impressive was the movement, as the machine would tilt forward, backward, left, and right based on what the player was doing with their plane. The game also featured a red button that shut the movement off if one was feeling the need for speed and all those motions were getting too much to handle. Think of a LOT less painful to ride mechanical bull with a kill switch and you sort of get the idea. Personally, I never saw anyone hit that button, but it did make for a great and safe addition if it was needed.

I didn’t find out about the even more impressively insane R-360 rotating cabinet version until a few years later when a friend played one while on vacation and showed me a few photos taken by his girlfriend where he was upside down or sideways in the machine’s cockpit. She later told me that was the one of the funniest things she ever saw and heard, as he was yelling and screaming a stream of expletives as soon as the machine went spinning, despite the seat belts and safety harness holding him tightly inside and the attendant nearby who helped him secure himself. He denied that screaming part for years, by the way.

Great, a Bogey on my tail and I’m not Lauren Bacall. Halp!

Well, thanks to M2, you get less yelling and screaming and more fun at home or on the road with its amazing port of the game in SEGA AGES: G-LOC Air Battle ($7.99), which faithfully recreates the stand up arcade and Moving Seat sit down cabinet versions plus four other viewpoints with 100% less rotating (no R-360 spinning here), but plenty of motion if you choose the Seat view. There’s also a new AGES mode that’s somewhat hilarious as it offers an excellent and increasingly more challenging 16 stages where you’re incredibly outnumbered but have seemingly unlimited missiles. Of course, that’s while the game throws everything it can at you as skies are filled with planes and other stages have more sea and land targets to keep you occupied. Well, maybe there will be screaming and yelling after all, as this mode is a ton of fun, but goes from super easy to super tough within those stages.

Along with the great new AGES version, M2’s port is superb, accurate and marks the first time the arcade version has been perfectly recreated for a home console. I had the Sega Genesis and Game Gear versions of this, and both were nowhere as good as this. Then again, pulling off those Super Scaler pixel visuals back in the early 90’s on a console was an impossible task. The Switch handles them with ease and has me hoping M2 has plans to get games like Power Drift, Enduro Racer or A.B. Cop ported and running on the hybrid console. We shall see I suppose, but those arcade classics are in good hands if M2 is on the case. 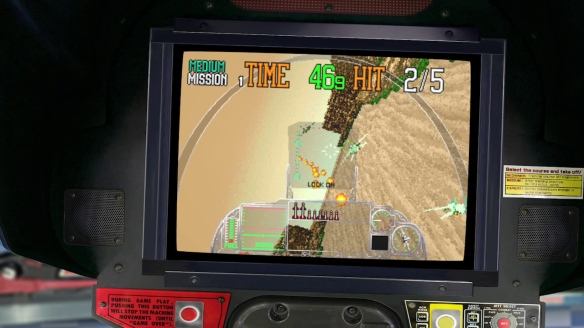 (Squints, eastward): How’d they get an arcade machine in my Switch???

The port’s sole drawback is if you decide to play the Moving Cabinet or Cockpit arcade versions, some players may want to use docked mode on a large TV.  Screen real estate in these modes is made up of the arcade perfect game presented in a fantastic recreation of each cabinet’s screen that, in tandem with the HD Rumble, really delivers the goods. Even the clicky button sounds from the arcade joystick are simulated perfectly, along with a background sounds mix that simulate arcade noises. It’s still playable in handheld mode, but if you have old eyes like mine, docked mode keeps the screen size larger and makes all those fast-moving targets easier to shoot. Three game modes also mean you’ll need to play Beginner, Medium and Expert to see all 16 stages, and the game and controls change based on difficulty level.

This may look a bit like another SEGA arcade classic, 1987’s After Burner, but in that game you could cheat death by avoiding planes and zooming through levels. In G-LOC, your viewpoint is mostly first person from the cockpit save for when an enemy gets on your six and is going to blow you out of the sky (you can escape if you’re fast enough) and those short landing sequences that end some stages. This is a very busy game and you don’t have time to think outside of the goals the game sets for you.

Expert Mode will keep your fingers on their toes, for sure.

So, score another winner for SEGA and M2, I say. G-LOC Air Battle is pretty excellent, and while short (hey, it’s an arcade game, folks!), it’s still packing plenty of nostalgic punch and M2 has done the usual bang-up job here. If you’ve never played this one or only remember the older console versions, this one worth a buy because it finally nails the arcade version’s visuals along with much of the intensity. Well, almost. You’ll need to roll around on the floor, Switch or Switch Lite in hand to emulate the R-360 version, but that’s up to you if you want to do that. 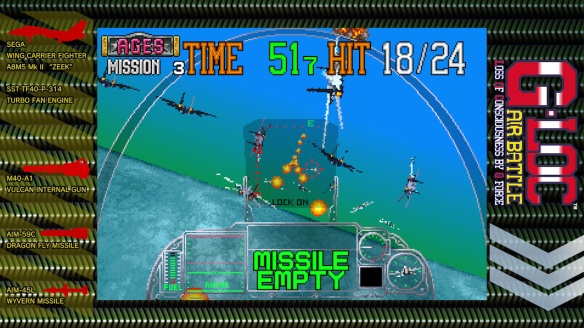 Oh, say – can you see if I packed my parachute? I’m a little busy here.