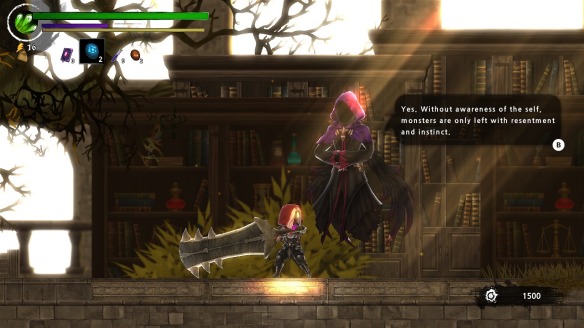 What’s in a name? Well, If you take things way too literally, Neopopcorn sounds like a really bad time at the movies if you choose to munch on what’s in that box as a substitute for the real thing (well, minus the nasty, salty fake “butter” glopped on top these days) and 3000th Duel sounds like a straight to cable flick you’d accidentally find on a random channel at about 3 am or so. Fortunately, neither of these are true and you have some shopping to do on Steam or the eShop now.

Got a PC or Nintendo Switch? Go get this game, pronto. Indie developer Neopopcorn’s mostly excellent 3000th Duel ($14.99) is a nice surprise overall and well worth a few plays because you can tailor your hero’s skills to your liking through a deep series of upgrades and multiple weapon choices. The game is more or less, a side-scrolling Dark Souls-like or similar challenge where the smallest foes initially take off large chunks of your character’s health, and bosses? Well, you’re going to be enrolling your hero into a health plan and double dipping on a life insurance policy here until you upgrade weapons and skills.

The game can be mastered (and joy of joys, controls can be completely customized!), but it’s going to take a bit of time if you’re stubborn and not going to learn everything here. The three weapon classes all have pros and cons, enemies come at you sometimes singly, but most times you’ll need to prepare for a few at once, and there’s a karma as currency thing that’s a pain at times, but you’d better get with the program and make it work for you or suffer. Then again, from the start, there’s a nice feeling of challenge here and that keeps you motivated to press on (the epic music helps a lot as well).

You’re going to need a long life bar… if you like one.

There’s a plot about a nameless hero with amnesia who ends up in a strange, but familiar world as he soon finds others with the same affliction in his travels. But play a few too many videogames with similar thematic elements and the story becomes almost an afterthought. The combat, assorted loot and plenty of upgrades are really where the fun is here. Well, that. and the stylized graphics, which give the game quite a unique look.

As you level up, you gain a few things such as Karma and Occults that can be used to buy gear and boost your skills. Accessories and other goodies can be found in well-guarded chests, plus there are a few hidden spaces you’ll want to make sure you find. The nice things as noted earlier, is your character can be quite the pain dealer, survive a few more hits, use magic, or a mix of whatever you like from the ever-expanding skills, so you’ll need to keep beating down those big bosses no matter how many times they get yo you first. You lose your karma in defeat. but it’s going to be waiting for you when you come back to life and retrieve it, similar to a few games these days.

There are a few dings in the game’s armor here and there, though. I wish the camera was pulled back a little more in some areas, but you can at least shift the game camera up a bit to get a better tactical look at maps. Save points are generally well-placed, but a save anywhere function would have been better (the Switch’s portable nature kind of demands it). All the bosses are tough, but once you get solid weapons and skills, fights with some seem like small wars of attrition rather than challenges. That said, the game will still be harder for novices or folks that think using one weapon will get the job done every time. Still, it’s a great and lengthy time to be had for the money. I’ve played games that cost more and are over before even half this game is done.

There will likely be a patch or two to fix up a few other things, but overall, 3000th Duel is pretty good stuff and a great little Switch game for those that like it rough. I have no clue what Neopopcorn is up to next, but if it’s a good as this. I’d sure love to take it for a spin. While it’s not the most “innovative” game out there, this one does what it does very well and is worth a play, plus.