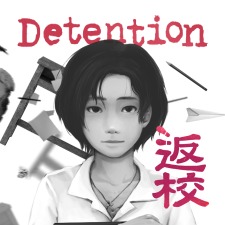 While thematically similar to The Coma: Recut from Devespresso Games, Red Candle Games‘ excellent Detention ($12.99 on PSN) manages to add a more psychological as well as historical tone to its scary elements. Set in a 1960’s era Taiwan during the horrfic period of martial law known as The White Terror, the game works extremely well as a short but solid game experience that gets as much mileage from its frightening imagery as it does with its somewhat timely political allegory

This isn’t a “survival horror” game in the zombie-packed Resident Evil vein and while it has a more similar vibe to the early, more thoughtful (but weirder) Silent Hill games, there are no weapons to wield here or a need to stock up on healing items for your trip through this virtual hell-space. This one’s a pure side-scrolling horror adventure game where you’ll need to avoid or appease the freakish ghosts you’ll encounter as you try and escape from the nightmare that Greenwood High has become.

Things start off in a similar fashion to The Coma as a student nods off during a class lesson and wakes up alone at his desk. He soon discovers another student asleep on a stage in the school auditorium and together, they set out to find a way out of the school. Well, there’s a twist to that I won’t spoil other than to say there’s a character change thing that occurs at some point. As you explore your surroundings, you’ll discover assorted clues and items you can use and/or combine in order to proceed. Of course, you’ll need to proceed cautiously as the school is also home to a number of very creepy spirits.

Some can be stealthily slipped past by holding your breath, which only lasts for a few seconds before your vision gets blurry and it seems as if you’ll pass out (not a good thing), while other spirits can only be dealt with by locating items they desire. There’s a bit of backtracking here that in some spots can be avoided by being a bit nosy in your earlier wanderings, although that may come with some risks. Then again, that’s one reason you’ll be wanting to play this, as a hoofing it about with clues and keys looking for spots to use them is what makes the genre what it is.

The beautiful stylized visuals are paired with WeiFan Chang’s brilliantly unsettling score and great sound effects that really pull you into the game world. Although the animation can be slightly stiff, it actually adds to the atmosphere thanks to the realistic proportions of the characters and some great environments. There’s a surreal tone as well with collage elements in cut scenes that flash seemingly subliminal imagery, some of it a little more than disturbing.

The game isn’t all that lengthy, but the final act can be a bit overlong as it plays out story elements that you may see coming. On the other hand, it feels as if Red Candle is trying to explain how awful those decades of persecution were for millions of people to an audience who very likely has not a clue that Taiwan was a pretty terrible place to live for a long time. So, I’ve giving the developer a pass on that because it’s a lesson not everyone learns or if it’s a case of something similar creeping into a culture, it’s shocking how many think it’s something creeping towards a good idea if there’s a little force applied to freedoms just because paranoia and power are a terrible couple.