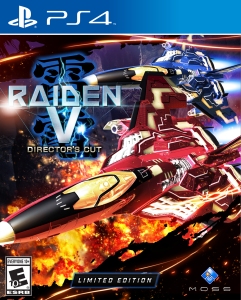 How great is UFO Interactive’s Raiden V: Director’s Cut? So great that I went and grabbed the previous installment on the PS3 (which just so happened to be part of this past weekend’s PSN Flash Sale and was $2.99 very well spent), slightly kicking myself (ow!) for missing it a few years back. I’d been cutting back on arcade shooters for a while, but something about this well-aged series has always drawn me to it. It’s probably because it brings back certain good memories, but it also helps that it’s been a consistently entertaining set of games despite some lesser console versions not being as fun.

This newest installment is more polished visually and aurally and thanks to its busy color palette and tons of explosions, it really looks and feels a hell of a lot busier to the eyes and reflexes. There’s so much going on that I found myself laughing out loud (to no one in particular, as usual). Skilled developer MOSS has reworked the traditional vertical arcade game screen so it’s packed with information to the point of distraction should your eyes float to the left or right of where the real action is. But you won’t let that happen, right?

Hey, the future of the planet is at stake, pal – eyes on the prize and all that. 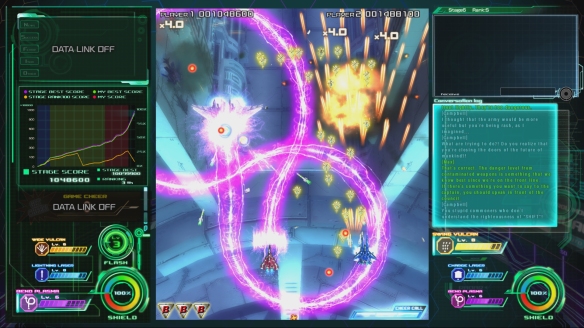 If you’re a longtime fan, most everything will click into place as soon as you fire this up. But MOSS has added a few nice twists to the formula such as a Story Mode that has multiple paths based on how well (or not) you play. In addition to the usual offline or co-op play, the game has online leaderboards and a rather unique “Cheer System” that allows other players to send you temporary gameplay assists at the press of a button. I’m not at all sure how this works because you’re not broadcasting your game when you start it up, but as you play, you’ll see point notices appear on one side of the screen (as if it’s not already frantic enough). You can also give cheers to others playing, so it’s good to tap that extra button when you’re not busy trying to not get blasted into space dust.

Then again, this isn’t a game you’ll beat a single time and never play again (who does that with a good arcade game anyway?). Mastering this type of craziness demands complete attention and flawless reflexes if you’re trying to ace a perfect one-credit run. The game’s difficulty is fairly challenging, but new players can coast through a dirt-simple Practice mode that the basic game with no enemies firing back. I haven’t touched it, but it’s nice to have it there for when I get tired of flailing around and getting smooshed by some big metal aircraft/tank hybrid. This a game where you take your small victories and try to gamble on bigger ones by maybe surviving that next level untouched (which keeps your high score intact).

The presentation is simply stunning overall with some lovely HD visuals popping right off the screen. All that flash is worth the fuss and shows the developer’s confidence with the franchise as strong as ever. The game segues seamlessly from cut scenes that zoom into familiar top-down gameplay and yes, that Raiden tradition of some shots being the same or a similar color to certain background elements is here in full force. This isn’t a complaint at all, mind you – it’s just something in the game to keep your eyes and fingers on their toes. That, and snapping up power-ups while under heavy fire and nabbing those tiny Fairies when they appear for some nice bonus points are all par for the course. Solid and almost always intense voice acting and a really killer soundtrack all get the job done well and everything add up to make this a game you’ll go back to anytime you need that shmup fix.

So, the final analysis is this: Yes, you should drop the 140 quarters on this game (that’s $34.99, before you start counting in your head) because you’re getting more than your money’s worth at the end of the day. Hell, I think I spent more than that way back around 1991 or so when I stumbled across the arcade version of the first Raiden at a taxi stand a block away and got hooked in something fierce. Grab a friend and hoist a few if you muist, but shmup responsibly because you’ll be a terrible space pilot if you’re too tipsy and seeing triple before the first boss drops in for a chat, lasers and missiles of assorted types peppering the skyline.