Indie developer/publisher Sometimes You also ports and distributes some interestingly nostalgic budget indie games for PC and consoles that aren’t perfect, but provide a bit of fun and challenge at a decent price point. Developed by Duck Devs, NeverEnd is a decent, simple looking top-down rogue-like/lite 3D pixel single player dungeon crawler (say that three times fast!) that’s influenced a tiny bit by The Legend of Zelda (without the overworld sections) with a tricky combat system that relies not only on weapon usage, but blocking and avoiding enemy attacks. While controls seem initially very clunky and off-putting, once you get the game’s mechanics and can deal with permadeath, things get much better. Granted, the game probably won’t win a ton of industry awards come the end of the year, but for $2.99 you’re getting your money’s worth and then some. 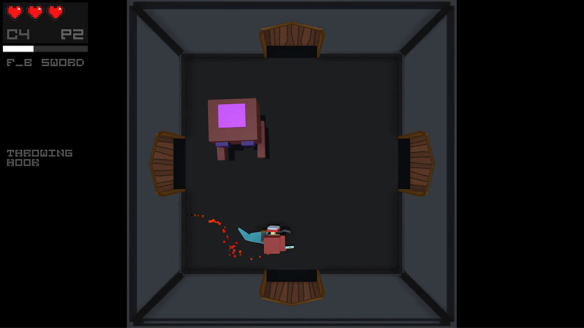 There’s not really a plot to speak of here. You’re just a blocky guy with a stick stuck in a dungeon that just so happens to be randomly generated each time you die and restart. There are enemies of a handful of types to dispatch (wolves, spiders, “zomborgs”), helpful shops to buy better gear from and so forth and so on. While finding and/or buying new gear is key to surviving, you can indeed beat the game with that starting stick, although it’s far from a simple task.

Dying happens often here, but the game saves certain stats such as enemy types killed and unlocked titles gained from progression. There’s also a bit of fishing to tackle if you’re willing to give it a whirl. In fact, it’s recommended to do some angling as soon as you can afford a fishing rod thanks to the ability to get some nice surprises (of the coin-y variety) from that diversion. As far as combat goes, learning to scoot behind enemies before they rotate and charge your way is the best way to play, as is whacking them soundly with your weapon of choice before they can do you in. 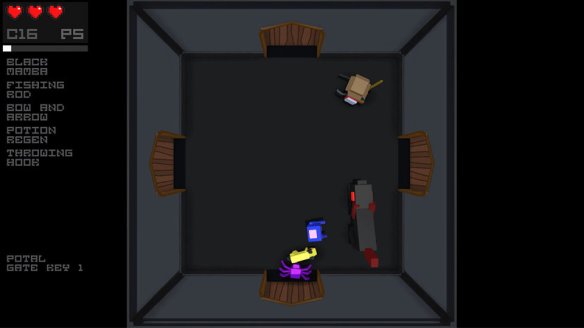 Shades of Gauntlet, There are also monster generators in some rooms that will pump out beasties until they’re destroyed. For the mist part, toddling up to those generators and getting bashy fast kills them off quickly, sometimes before or as they start producing enemies. You can catch both generator and monster with your attacks, which is a good thing if you’re clearing rooms and want to keep doing so. Bosses take a bit more effort and it’s here where you’ll probably expire quickly the most.

While the visuals are nothing to write home about, they do give the game a nicely retro look that may grow on you. The music cheerily bloops and bleeps along, adding to the retro vibe, although you may want to pop on a pair of earbuds so you can have your eardrums buzz if you really like the tunes. Overall, this isn’t a bad way to spend a few afternoons with if you like quirky games with a fair amount of challenge. Again, it’s not going to be the “best” game you’ll play on the Vita by a long shot. But if you’re a fan of indies and love supporting them, a little NeverEnd goes a long way. 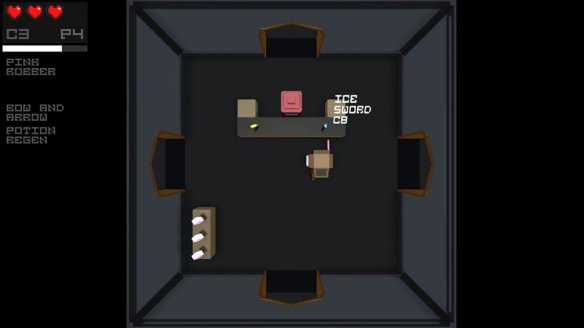