Eeek. I made it about ten minutes into the demo for Thailand-based developer YGGGAME’s upcoming horror game Home Sweet Home before tapping out for the first time, too scared out of my skull to move another inch. Of course, I wisely (or not so wisely) went back and restarted, determined to push on through my nearly squeezing my poor mouse to death. Let’s just say you’re all very fortunate I’m not some YouTube streamer with a loyal or any following, as the assorted sounds I was making were often creepier than the demo, which is absolutely nightmarish and so far, very well done.

I’ll let the official site’s version of the story lull you into its spell here:

Tim’s life has drastically changed since his wife disappeared mysteriously. One night, after suffering from sorrow for a long time, he woke up in an unknown place instead of his house. While trying to escape from this place, he was hunted by a rancorous female spirit. Can he survive? Is this place actually his house? Does it relate to the disappearance of his wife? Some dark sinister secret is hidden inside this house, and it won’t be a place of happiness as it used to be any longer.

What actually happens in the demo is you wake up with a hangover in a messy, unfamiliar bedroom you don’t recall (was that your wife’s voice telling you to get up?) and when you open the door, the stack of furniture in front of it is the first fright because it’s unexpected and wait? Was someone trying to keep you IN that room? Fortunately, there’s a flashlight under the table you’re crawling under that comes in very handy. A walk through a few filthy hallways and rooms leads to a simple puzzle where you need to find a key to get out of a suddenly locked room… but after that, it’s a descent into almost peeing yourself.

You spy a figure flash by a newly opened door and give chase down a few flights of stairs and into another trash-filled gloomy room. The door here leads to (surprise!) a brick wall with a huge blood splash on it and when you slowly (or quickly) turn around, there’s a trail of blood that goes out the door and outside, bloody footprints that go exactly where you need to be. Did I mention the hallway is now a different one?

While it’s no surprise that opening the door reveals who you were running after in full frightening form, but surprise!, your scare of the day or whatever prize she’s trying to claim doesn’t hesitate in coming after you. Well, as soon as her un-pretty head rotates around 180 degrees so she can chase you down quicker. Ulp! If you ever got a chance to play P.T. before Konami yanked it from Sony’s PlayStation Network, you’ll absolutely love this even when it’s making you squeal like a pair of live piglet slippers. 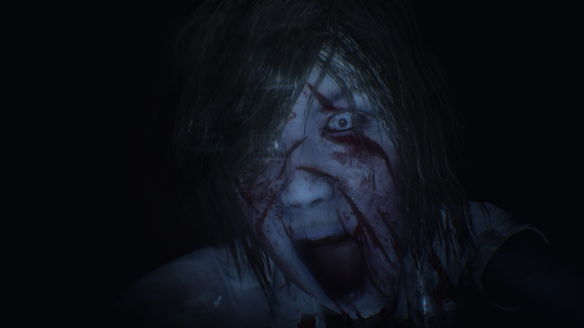 Yes, I died a few seconds after that and ONLY not because I opened a door to another brick wall down that hall I walked down earlier. I was lost in thought with an “Is that an Invunche? No, wrong country!” bouncing between my synapses as I turned my avatar around to meet his maker. Oops. The game auto-saved my progress right outside death’s door, so this time, running into a room on the left and quickly hiding in a locker did the trick. It also allowed me to see how Miss Freak-Out 2016 got around by using bloody portals to walk through walls. Great. Just great.

After that mess, the demo quickly turned into a creepy game of hide and seek with much-needed exploration and finding of items in order to unlock areas or otherwise thwart certain scary as hell deaths. That Unreal 4 engine and YGGG’s very talented team have combined to make a truly terrifying experience that also packs in some seriously spine-tingling sound effects and music. HSH plays with you, offering a glimpse of the unfair maiden slipping into a room you need to enter or bypass, then scaring you royally by allowing you to get in a nervous minute or two of jittery item collecting before dropping the horror hammer hard on your head.

I think the game is due next year as a final version, but I’m too frazzled to check. I ended up quitting after six deaths playing at night, but just blew past (okay, it took about 45 minutes that included my getting up and taking a 15 or so minute break after two particularly startling scares) the demo during this morning’s “coffee run” where I downed two cups of strong java and just went for it. This Thai horror is spicier than expected and if you like your jolts powerful and punchy, Home Sweet Home should absolutely be on your radar.