If you make it this far without losing a ball, you sir (or madam) are officially some sort of deity to be bowed down to.

tinyBuild Games decided to unleash a little surprise last week and allow some 3000 random Steam account holders to play a six stage Alpha version of Torched Hill‘s upcoming Road to Ballhalla, a game that’s a tiny bit hard to categorize. While it has a few similarities to Marble Madness and the 1998 PlayStation game Kula World (or Roll Away here in the states), Road to Ballhalla is more of a wall-less maze game where reaching the end of each level requires players changing their gameplay focus on a dime often within the same level. I guess you could all it a “puzzle” game if you like based on the simple visual style and rather cool music in that trailer below.

In case you didn’t watch the trailer and that previous sentence connotes “casual” to some of you core gamers who’d normally ignore something like this, you’re in for a big surprise. You can consider Road to Ballhalla the Dark Souls of indie puzzle games (or something *sexy* like that).

Controlling the game with the arrow keys was tricky (for someone reared on controller-based games) but pinpoint accurate with practice. Maps are untimed (thankfully!), yet you’ll need to hurry it up in some areas such as when a massive ball comes after your far tinier one with intent to crush. Other bits such as a map that tilts and messes up your concentration, life-draining floor tiles, lasers and other obstacles all make for an incredibly fun yet intentionally frustrating experience.

“AND WE’VE GOT THE BIGGEST BA-…” Oh, never mind – you’ll be too busy sweating and jamming hard on those arrow keys to be singing any AC DC at this point…

And then there are the puns. Puns galore, in fact. Puns and mild insults that make it seem as if you’re playing the game while a 1970’s era Don Rickles is sitting beside you egging you on. Given that the game is keyboard controlled, doing something bad like throwing it (or an otherwise good laptop) across the room isn’t the best solution to losing a ball on a board for the 20th time. tinyBuild noted on the game’s discusion board that it was tracking rage-quits for its little stress(ful) test. But I’ll have to say my own quits were less rage-y and more me playing the game while traveling and needing to displace myself from one wi-fi spot to another.

That’s not to say I didn’t have my share of trouble, mind you. I gave up on some stages initially because I kept hitting the wrong keys and losing balls (another fault of my console origins and a cramped laptop keyboard). But a bit less caffeine and a lot more patience ended up being the way to go. Ignore the insults, grin at the puns and turn on those zen-like reflexes for this one, folks. Going in and getting pissed off at the game poking you in the ribs with its visual verbiage is a sure way to lose (and lose that keyboard in the process). 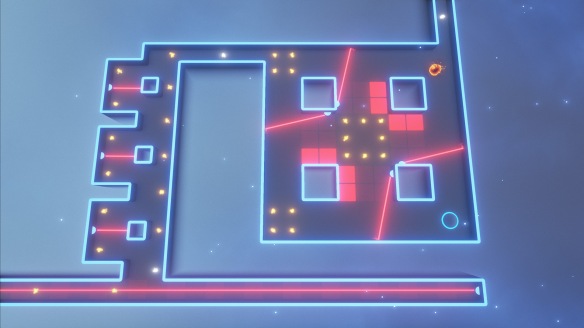 Cats go crazy for lasers, but you’re NOT a cat and lasers in this game will make YOU crazy.

The alpha build shuts down on Wednesday, but I think I have what I need and know the final version will be one for the ages. That final version has a to be announced “Mid-2016” release date, but that info will be updated with an actual date soon. Until then, stock up on keyboards or maybe legally hire some kid with excellent reflexes to play the game for you. That’s cheating, but the game won’t mind at all.