KT Racing has clearly put a Kylotonn of work into bringing TT Isle of Man – Ride On the Edge 2  ($59.99) to the Nintendo Switch and it’s truly an impressive effort on the hybrid console. The developer has recreated the recent PC and console experience perfectly in terms of complete content on the Switch with a few very obvious concessions to the lower-powered hardware. On Switch, there’s a tiny bit of texture draw-in plus some low resolution textures such as bike shadows, some of the signage, plus logos on your rider’s gear, which can all be a bit fuzzy in static shots. Despite these flaws and some long loading times, the game completely soars when in motion, particularly in docked mode. In handheld mode, the game is fine, but as a simulation that requires zen-like focus (there’s no in-race music for a reason!), every little detail needs to be seen at the best resolution available.

Where TT2 impresses constantly is in the excellent bike detail and its thrilling overall sense of speed thanks to excellent visual representation in the various camera modes and some tremendous sound design. The sheer intensity when you get to flying down a course and don’t go flying off your bike is nothing but a pure adrenaline rush, and the game will make you appreciate the art of the learning process. That said, it feels like a bit of understeer is in play on corners and you’ll crash a lot as a beginner and a great deal less (or not at all when you get better) as you get accustomed to the controls, which can by fully customized and come in a few styles from amateur to professional. Got a first or third party Switch compatible controller with a Rumble feature? DO please use that over the handheld’s Joy-Cons. The game goes from trickier to control and a bit too shaky to one where analog controls make things more manageable. The game is playable with Joy-Cons, mind you – it’s just more difficult if you stick to the standard control scheme and/or if you have the dreaded left Joy-Con drift issues some users have experienced with the handheld.

For beginners, a light finger on the gas and Free Roam mode will be your friends for a while as you learn the ropes. This is more a simulation with the option to use assorted assists, so just jamming down the accelerator will have you crashing your bike constantly. For new players, the game’s tough as nails and daunting main TT event will take quite a learning curve (there’s my second obvious pun for the day). But you can learn the Snaefell Mountain Course track in sections if you like, practicing up to all 12 parts of the track in bite-size but terrifyingly treacherous at speed slices. The game will also send you to 17 other tracks set in Ireland and the UK in its lengthy, season-based Career mode where there are temporary Perks to earn and in-game cash you can use in a few ways.

There’s a Tutorial at the start that gives you the basics using manual controls (it can also be accessed on the main menu), but go ahead and tweak the options after you complete it. Career mode gets you a seasonal set of race action where the main goal is to take the TT crown, but it will likely take less skilled players a few seasons to earn all the signatures needed. Quick Race and Time Attack let you take the available bikes for a spin on assorted tracks, while the brilliant Free Roam mode shows up in two flavors. The first is separate from Career and lets you ride in a beautifully rendered open world for as long as you like, and the second features the same large map, but with an ever expanding list of challenges that grow as your career progresses. Expert players may avoid it, but for my tastes, it’s a wonderful place to practice on every bike you can lay gloves on.

You’ll be all over this map every chance you get.

In handheld mode, the game tends to need a lot more steering management, as on the small screen, the blazing sense of speed can lead to wreck after wreck on some courses. The handling has been vastly improved from the first game, so you can indeed feel a lot more confident that any wreck is your own fault. Some of the slower class bikes (like the 1972 model MV Agusta 500 Three) can actually travel over a curb or very briefly on other surfaces and not crash, but you need to pay attention to the road surfaces and the various bumps and sometimes little jumps they hit you with. KT’s work on the road surfaces is stellar here and the HD Rumble gets quite a workout throughout the game.

The Career menu can be a bit daunting as first, but I wasn’t put off by it once I got about two minutes into seeing how it works. You can challenge easy, normal or hard races with more rewards based on your choice. You’re only allowed certain events each month via the game calendar, so try to finish in the money or at least get a respectable place and whatever Perks or cash you can. Perks cost game earned money to use, and not every Perk is necessary to succeed. Balance is the key here, as you don’t want to run our of cash, but Perks tend to be less important than getting and equipping new parts for your bikes, as you’ll see when applying upgrades as your career advances. 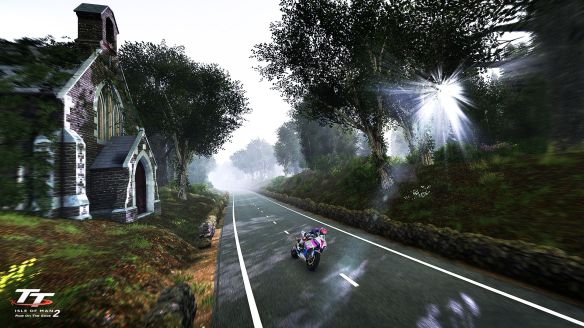 Yeah, yeah, it’s from the PC version, but taking screens on the Switch is a hassle when sharing them in a post requires so many steps. Sorry!

In terms of pricing, you actually get more than what you pay for, as if you’re into the sport, there’s a lot here to do and KT has made enough improvements that the overall experience will be worth the price if one really gets into what’s here. While it’s definitely not for those who don’t like its simulation aspects, it’s far cheaper than a trip to the actual race (which has been canceled this year for obvious reasons, anyway). This a big game that needs a small demo on Switch to help it move units outside its core players, as there will be a lot of Switch-only owners who may be curious, but not willing to commit to full retail unless they see and play it. Those who own the PC or console versions may not want to get a Switch for this one game, but if they have one, it’s worth a look to see what the developer has accomplished on the system.

I’ve not yet tried the multiplayer modes as there was no one online to play with as of this early review and current lockdown conditions mean I can’t round up friends to play hotseat with on the couch. But I did run a few offline single player events set to 9 other AI riders with the variable weather setting and the game performed quite well indeed. I actually liked that the AI would crash from time to time during my tests and even had a case where I had a crash happen in front of me and I had to try and avoid it. I failed when I braked, another bike passed around the flashing bikes, bumped mine and I took a tumble. Ouch and oops. That wreck was one game seller in my book, but actually finishing races and going up in the rankings is very likely what most other Switch players are looking for. You do get that in spades, but it’s not going to by an easy process at all. If you’re up to the challenge and want to go for that ride, Well, here’s your game then.

-Review code provided by the publisher.