Generally, when it comes to peripherals, I’m mostly a first-party OEM guy, particularly when it comes to controllers. That said, once in a while I’ll stumble across a third-party item that not only does what it needs to do well, it does it well enough to recommend without hesitation. I’d initially planned a review of the otherwise decent officially licensed Horipad Wired Controller ($19.99) and was just about done writing when I got an email from an Ematic PR rep asking if I was interested in taking their Wired N-Switch ($19.99) and Wireless N-Switch ($27.99) Switch controllers for a test drive. Of course, I said I’d love to and shortly afterwards, both arrived and were indeed, taken for a few spins and assorted tests over the past two weeks. 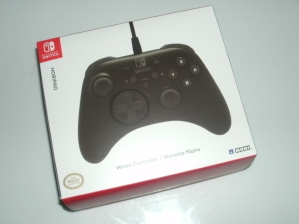 I’ll say first and foremost, that licensed Switch Horipad is an excellent official controller that’s lightweight, simple to set up out of the box and a really well-manufactured unit that works fine with every game I tested it with* with no real weaknesses outside the lack of vibration, NFC, and motion control functions that give certain Switch games that extra kick. Yes, that low price point means you get not a hint of feedback which is disappointing unless you really don’t care and just want a solid, inexpensive and very reliable controller for yourself or the kids. 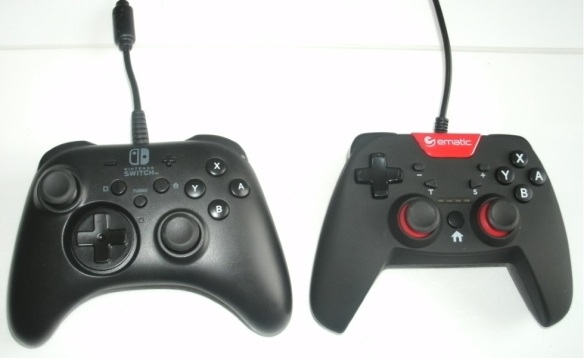 For some reason, the Horipad looks as if it’s got a slight frown, while Ematic’s has a “Hey, check me out – I’m cool!” smile thing working for it.

The Ematic pair also lose that NFC functionality (as in no Amiibo use unless you use the Joy-Cons connected to the Switch or the more expensive Pro Controller), but both feature double motors that deliver a nice rumble in games that support that feature. For the record, I’m really not a fan of motion controls at all, but as for that satisfying rumble, a little vibration goes a long way in some games where that tactile feedback just feels right. That said, Ematic’s Wired N-Switch controller not only compares favorably to the Horipad, it’s better on a few fronts.

Both pads come in a soft, matte black finish with red highlights under the analog sticks (no, they don’t light up, but they look like they should). The in-line dual analog sticks will be familiar to Sony console fans, and shouldn’t take much time at all to grow accustomed to if you’re more used to the offset sticks found on the Switch and Xbox systems. Buttons and triggers are nice and responsive overall, with a D-pad that’s quite pleasant to use. There’s an interesting difference in the Ematic and Horipad triggers where the LB and RB buttons are a bit muffled on the Horipad and nice and clicky on the Ematics, while the L and R triggers on the Horipad and Ematics have a looser feel. I did like the more cradled feeling on the Ematic triggers, but both pads do well when it comes down to it. 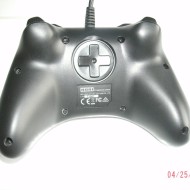 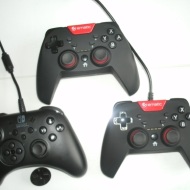 There’s a Turbo button on both pads which should please the arcade shmup fans out there who desire that function, although I believe some modern and retro shmups support at least one autofire variant accessible via their options menus. 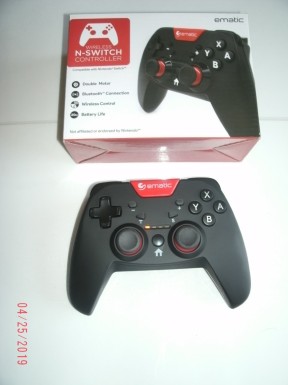 Interestingly enough, it takes less time to set up the wireless model, as it comes partially charged and setup simply requires turning the Switch on, selecting “Controllers ” from the Home menu, going to “Change Grip and Order” and holding down the Home button for five seconds. If you need to charge the controller, just plug the included USB cable into the controller and then the Switch. You can then use the wireless pad with the Switch docked or undocked.

Using the wired pad out of the box takes a few more steps and you’ll absolutely want to be in docked mode to do this effectively, or else as with the Horipad, the wired pad won’t work at all.

1.Turn your Switch on and scroll down to “System Settings”, then go to “Controllers and Sensors” and change that to “Pro Controller Wired Communication”.

2. Next, turn the console off and back on, and while docked, plug the wired pad into one of the USB slots on the Switch. The controller will register and can then be used in docked mode.

For the purposes of this review, I connected both Ematic controllers and that Horipad to my Switch, and as you can see below, everything was good to go:

Even better, once the Switch was turned off for the evening, the system still acknowledged all three controllers the next day when the system was turned on and each one’s L+R triggers were pressed. One drawback here is the wired controller’s 4 LED lights will flash on and off when the Switch is shut down, so unplugging it might be a good idea after all. The Horipad is the simpler to use of the three in terms of initial “plug and play” recognition, but once you set up the Emantic controllers its quite easy to do so again should you take one along to play on a different Switch.

The red lights on those Ematic pads means things are going well, the Horipad has no lights, but it’s on and working perfectly.

The wired pad also does double duty as a PC controller with the caveat that Steam users are supported right out of the box via tweaking settings in the service’s Big Picture Mode. Unfortunately, my attempts to plug and play non-Steam games were all met with the pad wigging out in a few ways that forced me to manually close anything I tried to play while attempts to connect the Wireless pad via Bluetooth to my laptop without Steam running were met with my PC ignoring it. As I don’t like having a constantly open Bluetooth connection and the box says nothing about the Wireless pad being used on PC, I didn’t try another means of forcing a setup at all despite finding out during my research that Nintendo’s Pro Controller does indeed work on Steam via Bluetooth provided it’s set up correctly.

The wireless pad also features an up to 20-hour battery life between charges with an estimated 2-hour charge time. I ended up playing about 4 hours a day on and off using the controller for five days and surprisingly, those four red lights on the front started flashing around the 18th hour, give or take 20 minutes or so. That’s pretty darn good, I say. Granted, your mileage will vary based on how long you play per session and possibly whether or not you put your Switch in sleep mode or just turn it off when you’re done for the day.

Overall, I’m quite pleased with all three controllers, but I’ll note that in terms of features and value for the money, Ematic has the edge here.

(*Yeah, yeah, I know some hardcore fighting game fanatics dislike that Horipad and a few other budget controllers for a few reasons, but I don’t play any games competitively and hey, that’s what those expensive fighting game arcade sticks are for, right?)