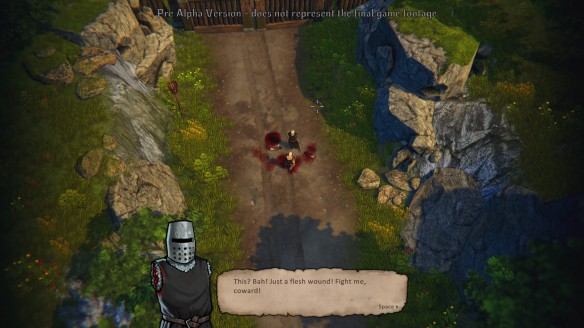 Yep. This needs to be played for this reference alone.

First of all, when I went to install the Rustler Alpha demo on Steam, I was greeted with Grand Theft Horse as a title on the game installer, which was magnificent. Indie developer Justus Games knows which side of the bread their butter in on. Second of all, for an alpha, the game is coming together pretty well. It’s just up on Kickstarter now and is there waiting for you to pledge or the drunken sot with the sword in the banner above may come for you. He’ll be right up your alley if you’re not right up his, as it were. That alley will be dark ad have a few rodents in it, most likely.

Gameplay is much the original Grand Theft Auto and GTA 2 isometric top down stuff but rendered in a nicer game engine with some lusher environments. As with the aforementioned games, there’s humor in all the mayhem you cause and yes, the old ultra-violence means it’s not a child’s game for sure. But there’s that nifty cathartic thing going on here that just works because you get immediate results from your attempts at criminal behavior (or, assorted guards and villagers don’t just stand by while you crime away), so expect to fight as you run run or ride a swiped horse away from trouble, or cause more pain for as long as you can. It’s your choice, but the lead’s character’s seemingly perpetually drunken state can cause him to fall off a horse or otherwise be dismounted.

As the Alpha demo available is an Alpha, it’s got a few issues in terms of performance and little glitches here and there. For me, as I’ve been doing this for a few decades, I’m more than used to playing or seeing game demos in assorted states. It’s like viewing an incomplete film, which I’ve also been fortunate to do a few times. You see things as they’re coming together and appreciate the creation process because you realize it’s NOT an easy thing to get right, these programming and creation things.

Oh, right. I haven’t seen a single episode of The Witcher on Netflix (I have issues with running streaming content as smoothly as I’d like here), but I guess this is supposed to be funny or meme-worthy or whatever:

Well, I laughed no matter the intention, so that’s a good thing, right?