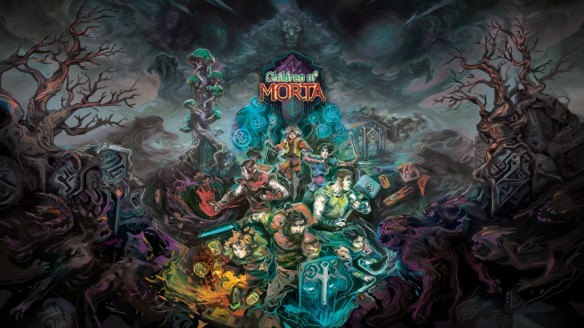 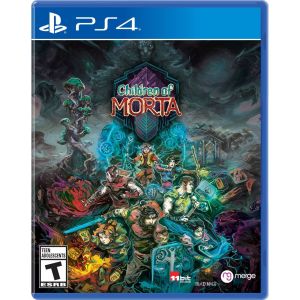 “Outstanding” is the first word that springs to mind in Dead Mage and 11Bit Studios spectacular Children of Morta ($29.99), a game I didn’t want to stop playing. I dragged out the gameplay intentionally, clocking in about 25 hours in because between the lovely visuals, great action-packed gameplay, and often heart-tugging story here, I didn’t want to leave this gorgeous action/RPG’s world. Yes, it’s a slower paced story and some may think it’s heavy use of deliberately paced narrative and the narrator’s Bastion-like delivery slows the game down. But as someone who’s a reader of stories (and sometimes a teller of them when properly prompted) this didn’t bother me one bit. Besides, every game one plays need not be the same as another and the focus on family here is welcome for a change.

This is a game where sentiment is an important plot device, but the action is also well implemented and sometimes very challenging in a product that took five years to craft. Both the art and artistry on display are to be properly commended, so hats off to all involved in this. I got a digital code to review, but I’m surely and sorely tempted to buy this as a physical release just to have if it ever disappears from PSN for any reason. Yeah, I’d play this again even though it’s more or less a “one and done” game to some extent, but a great one worth checking out a few times for its randomly generated levels and some neat side missions (“Who’s a good puppy? You are!” is a hint I’ll give). I was thrilled by most of what’s here to definitely say I’d revisit it like a good novel because it works well as enough of a memorable visual and aural treat with a good story, to boot.

Pixel perfection, plus the animation is always fantastic.

The Bergsons are a family that discovers a corrupting force has come to their land and fortunately, the spirit of adventure runs in the family. That we’re dealing with a tight-knit family where you can choose to play as a few classes is a fine touch and surprise, much better that the sometimes generic hero types (that too often have some form of amnesia) in RPGs. One fun thing here is the Bergsons have nicely normal names that seem dull, but I say that’s more the player than the game wanting to choose a “McHero” or original sounding name because they think it makes for a better experience. This game, for me works because no one person is the star – they’re all great and necessary characters here. Even the ones that seem a little strange in some areas (Lucy, I’m taking about you and that laughing of yours).

Things kick off with a tutorial that shows you the ropes for its first two characters before dropping you at the family home, where you pick available missions and progress the story. The game goes deep into lore as things get twisty in terms of a few things, but it’s never confusing and things deepen as the corruption gets closer. This is a very well thought out experience overall as a few things of importance take place for the Bergsons (I’m being vague on purpose here). The random dungeon aspect and lack of permadeath keep things rolling (but using a character too much in a row is a bad idea, as you’ll see) and co-op works exceptionally well if you play this with a couch buddy. The game is balanced to where ranged characters are better for bosses when all us said and done, so using the two you get here (there are six family members to control), swapping them out for certain maps (making sure to watch for signs of corruption), is part of the game.

If there’s a gripe, the even more fun co-op game is only limited to two players as a time. Online play is also a no-go (for now), but it’s amusing in a way that some will no doubt complain about its lack in a game where closeness is a major theme. Personally, I think what’s here works excellently without it, but we’ll see if or when it’s added if it’s a true lobby filler with so many actual pure MMO experiences already on PC and consoles.It’s not that there’s no faith in the online experience to come, mind you. It’s just that people can be fickle enough to drop an online game when they lose interest or something more shiny and initially interesting comes along.

Yes, it takes time and patience to master some characters (some are fast, some are slow and grinding helps a great deal) and a few boss fights can be either too easy or too hard (depending on how you play). But the game does so much so well that its flaws are pretty much guaranteed to be patched in the near future and aren’t really a big deal in the grand scheme of things. I rather liked how losing some fights opened up other character choices and that certain things need to take place for other rewards to drop. There’s also some great music to wrap your ears with as it tunes in perfectly to whats on screen. I’d buy a soundtrack for this if one was released at some point on a CD (okay, I’ll grab a digital version if need be).

The oddball thing here is I’ll bet some gamers will likely either hate on the narrative pace and some story elements (wait until they see my upcoming Monkey King: Hero Is Back review!) and rely on reviews that hit at the flaws (and perceived flaws) first because the person reviewing it doesn’t grasp that it’s supposed to be paced the way it is. Or the plot will get ragged on for not being what a player wanted despite it adding some originality (as if absolute control of such things like plot and character names should always be a personalized part of gaming). I say just play it and take in the experience more fully as one where you’re part of a story and you’ll be swept away on a few fronts. This one’s special at the end of the day for what it gets right and I hope to see either a follow-up or all new game from this talented team.

You’ll come back here a lot to learn some cool stuff as the game progresses.

Amusingly, I actually wrote up a few paragraphs on the story and parts of the game where I was floored by something, but I realized it was kind of spoiling a game (and my impressions were pretty much spoiler-free). Going in cold like I did is the most effective way to experience this, so I’ll let you do just that. Score wise, it’s an easy title to highly recommend for those that like a bit of variety in a game world that has a great deal going for it. Get this, and get a friend and a couch (or couch space) for even more of a good time.