“Ma’am, could you tell me where you keep the puzzle pieces, please?”

Want a teased brain and some very pleasant and relaxing tunes to chill out to? Do you like puzzles and hidden object games? Well, here’s a game for you, then. Colibri Games’ The Tiny Bang Story ($9.99) finally comes to Switch and while it’s quite lovely to look at, some older gamers  (raises hand) might want to play it docked thanks to some very intricately detailed environments that make playing in portable mode a little tricky.

That’s not to say it’s unplayable undocked, mind you. This is a game where a larger TV screen not only shows off the great art to its fullest, some of the tiny details are harder to spot if you can’t see them (and there are a lot of tiny details here). I did make it through a hour or so through in portable mode before going docked and not looking back, but your own mileage may vary.

That and the onscreen pointer is super small, which helps seeing things, but also hinders things a bit because it’s so minuscule and you need to do a bit of hunting and pecking here. This is really the only “bad” thing about the game. Some of the search bits are yes, a lot of trial and error searching or tapping, but that’s par for the course in this sort of game. The puzzle portions are set up and balanced overall between those that make you think and a few where you might pull a few hairs figuring them out, but that’s also part of the deal you get with these games.

Your brain will be trained for sure by some of these puzzles.

While it’s wordless, all the story you need to know is up front and told simply enough for nearly anyone to grasp. Your tiny world is struck by a meteorite (or is it a kicked soccer ball?) and broken into tiny puzzle pieces and you’re tasked with potting things back together. It’s not an easy task what with pieces scattered in every area and plenty of objects to locate to help solve some of the environmental puzzles in each area. The game has a lot of back and forth between areas as you work through it, so expect a few roadblocks as you make your way around and figure things out.

The game is about seven to eight hours long, but there’s no real rush to play here. As noted earlier, the music is low key and pretty stress-free throughout, so saving that planet is about the most calming thing out there. Well, save for the grinding your brain may get from some of the harder puzzles. Nothing here is really impossible, though. Outside the box thinking and a little number imagery when thinking of some shapes will help as well. You’ll be collecting all sorts of stuff as you go, some of which is necessary to get into new locations. There’s a tally of what you need in each area, but sometimes the light hint system will be too vague until you come to a impasse and see that you need a certain amount of an item to progress. 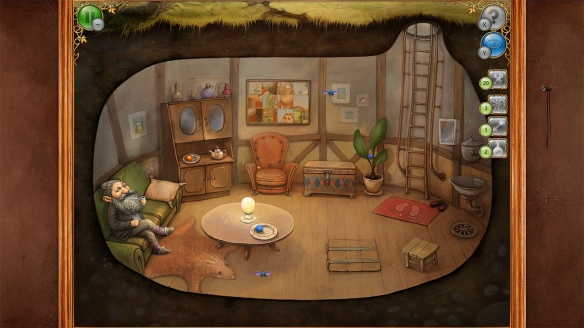 I know you have what I need old man!

Overall, we have a winner here in me book, but it’s not for all tastes because it’s so laid back it’s amusing when you’re so chilled out that (oops) you nay find yourself passed out blissfully with the Switch also in Sleep Mode. That’s amusing stuff when it happens in a game that’s so mellow (hey, it happened to me twice, and I found it funny). Besides, good and calming for the brain is a good thing for some games these days when you think about it, right?