Don’t let the childlike look of its hand-drawn visuals fool you one bit. Where Are My Friends?  ($5.99) is going to absolutely break those gamers out there who take it for a spin expecting an easy Trophy hunt. Between the wordless storytelling that requires paying full attention when exploring the game’s point/click adventure segments, to some insane platforming sections, this one’s a hardcore challenge well disguised as a more light, family friendly affair. Actually, it may take an entire family to complete some of the fiercely tough sequences here, so get everyone together and maybe even the family pet can even give this a shot after everyone else fails.

My own reflexes aren’t as sharp these days, so at one point after discovering the somewhat challenging (okay, brutal) platforming sections, I actually made a phone call, packed up my PS4 and hoofed it over to a friend’s place so his 11-year old kid could do what I couldn’t. Let’s just say that kid earned his free pizza after that, but he also wanted me to note (and I quote): “This is one of the most crazy games I’ve ever played in my life, and I’m only 11!  You should pay me more next time!”  Hey, kid? There won’t be a next time (until the next time I get a game like this), and you didn’t get paid, per se (don’t child labor laws prevent that sort of thing?) . You’re a ringer, pal – you’re supposed to do your thing, do it well and zip it. Well, I didn’t say that, but I’m thinking he’s now thinking he’s getting pressed into service whenever I need some game-related help.

Anyway, in the game, you play as Wheye, an Eyeball who needs to search for and gather his four friends who end up trapped on the planet they’re exploring before it explodes. The game is a mash-up of different genres that range from point and click adventure, not quite endless runner, super-challenging “metroidvania” and puzzle/platformer. The game kicks off with a tricky bit of figuring out where to go ans what to do aboard a spaceship so you can get down to the planet to rescue your friends. It will become clear as a bell that if you can’t get past this section, you’ll never see the rest of the game. Fortunately, if your brain is working well enough, you can make it through that first area in maybe 15 minutes without a walkthrough (or less if you use one).

After that, you get to choose where to go next using a giant wheel to select which friend to rescue. The point & click segment is the easiest, but you’ll need to pay close attention or get stuck if you combine the right items at the wrong time. The runner section is a bit of a pain thanks to spiked sections and pits that will send you back to the last checkpoint when you miss a jump. The puzzle/platform and “metroidvania” segments are also pretty rough, with the mix of instant kill laser traps, precision jumping needed and a few leaps of faith that fall squarely into trial and error territory. As jumping can be a tad stiff, those unlimited lives do come in handy, that’s for darn sure.

Loading up a save, I had the kid do the laser-packed jump-fest parts, which seem to go on forever with increasingly challenging drops down to even harder stages. While you have unlimited lives, at one point, the kid went through a period of “come on!” and “really?” when the lasers and faith jumping got poor Wheye zapped in a few too many spots. Then there was the “REALLY?!” phase when he thought he finally cleared the laser stuff only to find it went on. At one point, he put the controller down, looked at me with a raised eyebrow and asked “Are you trying to make me go crazy? I like games a LOT, but this is NUTS!“ Of course, I used the old “Well, your dad and mom say you can beat ANY game you play, so…” That thrown gauntlet set him into motion like a champ.

The funniest bit in all this was after about 20 minutes more of this, the pizza I’d ordered arrived and when his dad went to pay for it, I was asked if I could leave the room for a minute and close the door. I did and figured he was going to either toss my PS4 out the window or let out a series of expletives into the pillow he was punching every time he missed a jump. As I walked into the kitchen to get him a slice, I heard that muffled swearing and got a chuckle when his mom popped her head into the room and asked if the kid was playing a game he was having trouble with because he always closes his door and yells into a pillow when that happens. Busted. But guess who then aced the runner section with only about 18 or 19 attempts? 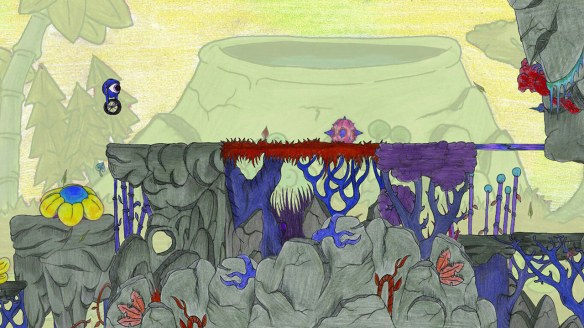 While the art style may be hard for some to deal with, it swings between comic-style storytelling, coloring book-like backdrops in some sections and a sort of MS Paint look with simple colors and shading. The kid found it “fun” and when I asked what he liked about it that made it fun, he noted “Well, it looks like something a kid like me would make” adding “But I wouldn’t make it THAT weird. Or hard to play for kids my age!”. I reminded him that he helped me beat the game and you should have seen the laser-eyed look I got in return. I ended up replaying the parts he missed at the beginning while he had his second slice of pizza, partly to show him what he missed and partly because I knew I wasn’t going to leave there in one piece if I tried to just buy him off with pizza and a “Thanks, kid!” followed by a pat on the head. Okay, I’d definitely skip the pat on the head part because that’s just strange to do with anyone that’s not a pet.

So yeah, I kind of cheated. But, hell, sometimes you need to call in a ringer, folks. I even asked the kid to score the game because I figured he deserved to call it like he saw it. That got a thoughtful pause (furrowed brow and all), a sigh, shrug and finally an “Oh, I don’t know. A “C” for… Come On!” Darn kids and their wisecracks. A C it is, then.