I could be a really sneaky bum of a guy and start this short review with the following blurb-friendly pull quote: “Energy Invasion is the first Breakout game of 2018!” and actually be completely correct. Well, the game is a sort of clone/homage to the classic arcade game with a bit of Arkanoid and a teeny-tiny dash of Space Invaders wrapped into a twin-stick shooter for good measure.  While not flawless, overall, it’s a pretty decent game from the ever busy developer Sometimes You (Evgeniy Kolpakov) that should appeal to fans of those older games looking for something new to hop into for a spell.

You get three game modes (Invasion, Linear, Endless), online leaderboards if you want to chart your score, and a surprisingly cool soundtrack from someone named Nick R 61 who packs the game with some pretty solid cuts. While the game isn’t the most impressive visually, you do get some neat background effects and a mix of retro and modern visual touches courtesy of the Unity engine. Gameplay is a bit more complex than Breakout as your ball can shoot at enemy blocks rather than the paddle at the bottom of the screen like in some Breakout/Arkanoid clones. It’s a bit tricky to get the hang of at first as you end up having to watch the ball as it ricochets around the screen while trying not to get distracted by the shots. On the easiest mode, you don’t need to worry about enemy shots at all. But crank up the challenge and it’s time to play Artful Dodger as the enemy shoots back. 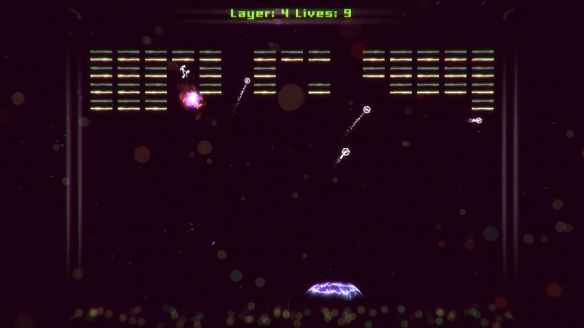 Both Invasion and Linear modes have 25 levels, while Endless is indeed, endless. The game isn’t all that difficult initially if you’re a master at these sorts of games, but you’re really not told how points are scored or how certain gameplay milestones or most power-ups are activated. In other words, Trophies will sometimes drop randomly before you figure out you’ve done something to make them. Of course, if you don’t care about Trophies (color me ambivalent on them), you’ll just be grooving on the game’s cool factor and figuring out what’s what as you go.

You’re given a limited amount of lives, but more can be had through play. Losing your last life gets you the choice to spend accumulated points to try again, but you’ll very likely have a decent enough supply of lives provided you make it through those later layers (levels) where the game isn’t giving you a ton of trouble. I did notice that unless you get your paddle in exactly the right spot, the ball would slide past it or get trapped in a brief cycle of rebounding against one side of the paddle before going off screen. It did take me a few attempts to get the controls down thanks to my right analog stick being a bit too loose, but it’s a case of practice making perfect and yep, me not playing one of these games in a while.

Still, the game has its moments where you sort of fall into the zone and layers fly by smoothly for a bit before trouble hits you square in the face. Most players will blow through this in a day or so, but that arcade-like replay value (and the aforementioned leaderboards) should do more than enough to get this stuck in your library for some time. Hey, it’s also a fine enough game to get the kids to try, but forget about explaining the swivel-hipped hottie represented in the game art. Based on that image, you’d almost think you were getting a Cave shooter or Touhou equivalent. But this is a lot less sexy and nowhere near a total bullet hell game at all.  While I haven’t played the Vita version, I’d bet a penny it’s the same thing. But hey, at a measly $2.99, you can buy both versions and see for yourself, right?